The conservative media has fallen for New Jersey's new governor. It's too soon for him to make a move ... right? 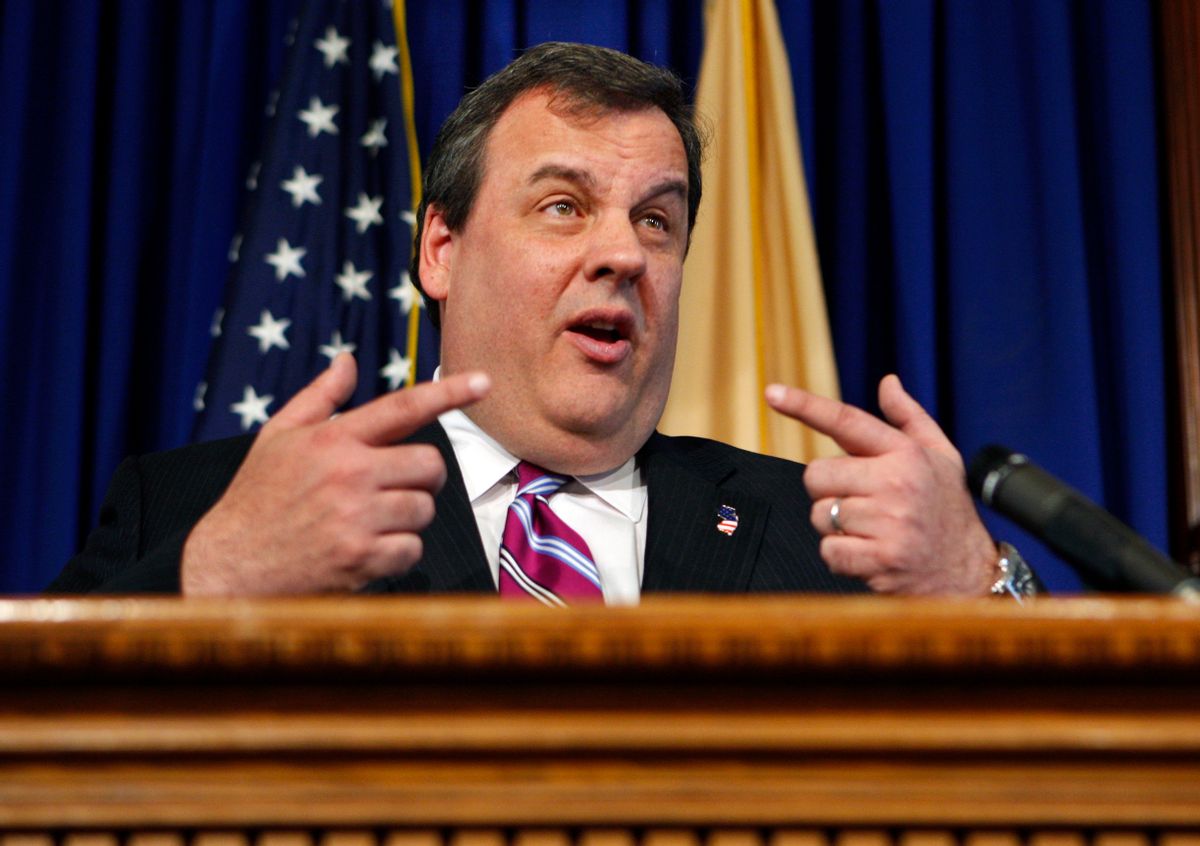 Suddenly, you can't go a day without stumbling upon a new glowing profile of Chris Christie from a conservative writer.

On Thursday, George Will described Christie, New Jersey's new chief executive, as "the nation's most interesting governor." Fred Barnes, in the latest Weekly Standard, devoted 1,741 words to him. And in the Wall Street Journal last week, columnist William McGurn praised Christie for "offering the voters a dose of Reagan Republicanism -- with a Jersey twist." And then there's Rush Limbaugh, who recently treated his listeners to a dramatic reading of Christie's budget address to the state Legislature.

"Is it wrong to love another man?" Limbaugh asked. "Because I love Chris Christie."

On one level, the reason for the right's sudden infatuation with the Garden State's governor is obvious. New Jersey is one of the nation's most liberal states, a place where it’s long been assumed Republicans could only win by moving to the left on social issues and cozying up to the powerful public employees unions -- and even then, they'd still need to get lucky. This was the basic blueprint used by Tom Kean and Christie Whitman, who were the only two Republicans to win statewide elections in New Jersey for 36 years -- until last November.

That's when Christie, a pro-life, anti-gay marriage Republican, unseated Jon Corzine by four points -- a landslide by New Jersey Republican standards. His victory was mainly a referendum on Corzine -- there's the getting lucky part -- but since taking office, he's happily picked a fight with the state's public school teachers, slashed the state budget by gutting local aid, and refused to extend the state's "millionaire's tax." National conservatives have never seen anything quite like this in New Jersey, so of course Christie has caught their eye.

But there's more to it than that.

Christie's war on Trenton's status quo comes as the national GOP is faced with an unusual leadership void. Sure, the party is positioned to do well -- maybe very well -- in November's election, but they will owe those gains to the rotten economy, the abundance of low-hanging fruit (Democrats who sneaked into office in the tidal waves of 2006 and 2008), and the buyer's remorse nature of midterm elections. Those variables will be either absent or muted by 2012. To have any hopes of winning then -- and into the future -- the GOP will need what it now lacks: a leader who can give it direction.

Right now, the party has three "front-runners" for its '12 presidential nomination: Mitt Romney, Mike Huckabee and Sarah Palin. As Ed Kilgore noted here last week, they all come with serious liabilities -- both in terms of the GOP primary campaign and the general election. More depressing for the GOP, though, is the stable of potential dark horses. That Haley Barbour is now attracting serious presidential buzz tells you about all you need to know.

Viewed in this context, the conservative press' adulation of Christie takes on new significance. The GOP  is essentially holding an open casting call for a new leader right now. The 2012 field really is wide open. Could Christie be the dark horse the right has been looking for?

On the surface, it's a far-fetched notion. He's only been on the job for a few months. He's practically unknown nationally and hasn't been hitting the rubber chicken circuit in Iowa and South Carolina. Nor does he have a substantial donor network. And he's a bit ... um ... corpulent -- not exactly the president out of central casting.

But it's also not impossible to see an opening for him. Just consider his dark horse competition. In the last few months, the names of Marco Rubio, Scott Brown and Mitch Daniels have been floated -- would Christie really be any more of a long shot than any of them? As his recent media coverage shows, his story is a compelling one for conservatives: a "real" Republican who won in a deeply blue state and didn't back down after taking office.

His stint as U.S. attorney, a post he held for seven years before running for governor, could be an asset too. Christie, who won the job by raising massive sums for George W. Bush's 2000 campaign, milked the post for all of its P.R. worth, targeting political corruption and stinging one crooked pol after another. There are some serious questions about the degree to which politics intruded on his work as U.S. attorney, but New Jersey's electorate didn't really care. His boasts of putting more than 100 corrupt politicians behind bars were good enough for them. A national GOP audience wouldn't be much different.

Plus, unlike most Republicans who win in blue states, he hasn't saddled himself with cultural views that are at odds with the GOP base. Kean, who governed New Jersey from 1982 to 1990, could have been George H.W. Bush's running mate in 1988, but his abortion views disqualified him. Whitman might have claimed the No. 2 slot on Bob Dole's 1996 ticket (whatever that was worth) had she been antiabortion. At least on paper, Chris Christie's profile is quite appealing to the national GOP base.

And if it's a question of ambition, Christie, a one-time student body president at the University of Delaware, probably has it. He's been eyeing the political big-time for years, something I learned all the way back in November 2002, when I was covering politics in New Jersey and writing about potential candidates for the 2005 gubernatorial race. Christie, then finishing his first year as U.S. attorney, was an unknown commodity. But as I was preparing the story, I got a call from one of his friends, politely (but insistently) pointing me to a recent article in another publication that had listed Christie as a future gubernatorial contender. The wheels were already in motion.

Is it likely Christie will seek the GOP nod in '12? Not at all. He'd have to start traveling and raising money almost immediately if he wants to, but he's just months into his first term as governor. The timing just doesn’t work right now. So he'll probably content himself with staying put and attracting more national attention, hoping instead for a spot on the ultimate nominee's V.P. list. And if '12 brings another GOP defeat, he'd then have the option of running for president in 2016. But who knows?

What we do know is that Chris Christie has landed -- emphatically -- on the national GOP radar. This says something about him and his ambition; it's no coincidence that he's positioned himself so well to capitalize on this moment. But the simple fact that a governor who's been in office for just over a hundred days and whose only previous elected experience came at the county level is stirring such excitement on the right says a lot more about the leaderless, directionless state of today's GOP. Republicans are looking for someone -- anyone -- to believe in.