Schumer and Durbin: Roommates to rivals?

The two leading candidates to replace Senate Majority Leader Harry Reid, if he loses, still live together in D.C. 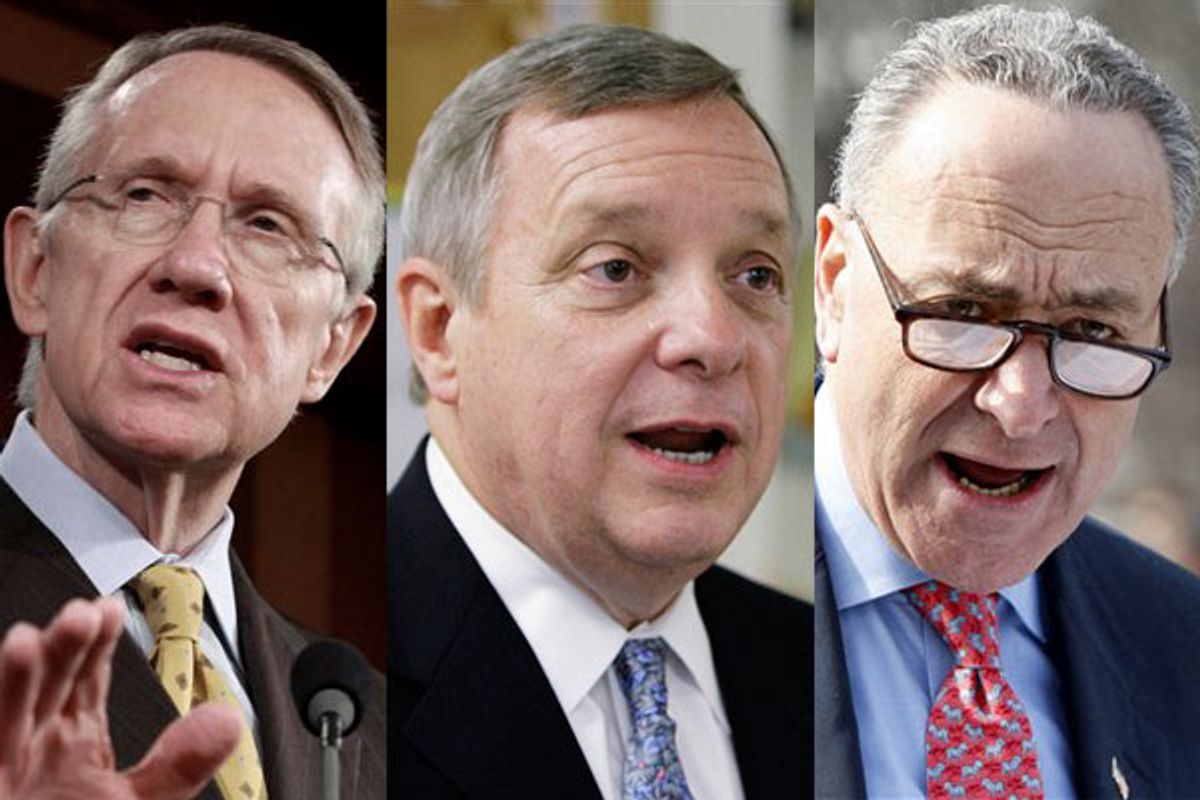 That's the situation Chuck Schumer and Dick Durbin could find themselves in this year. Both men may want to take over as Senate majority leader if Harry Reid loses his reelection campaign in November. And both men, when they're not in their respective home states (Illinois for Durbin, New York for Schumer) live together in a Capitol Hill house owned by Rep. George Miller, D-Calif., along with Rep. Bill Delahunt, D-Mass. Which means an already delicate situation could wind up being truly weird.

Neither Durbin nor Schumer wants to seem like he's after Reid's job, or to discuss the prospect of seeking it. "They're still friends, and they will be when Harry Reid is reelected, too," Durbin's spokesman, Joe Shoemaker, told me Thursday -- just after saying he was about to hang the phone up, once I started asking questions about a leadership race. At least he answered it; Schumer aides, for their part, didn't even return phone calls.

But there's little doubt in Washington that both of them are preparing for a campaign no Senate Democrats would like them to have to run. Reid trails all his potential Republican rivals, and history says he probably won't make it. And Democratic sources say some colleagues are starting to see Durbin and Schumer's actions as part of that preparation. "It's uncomfortable," one senior Democratic aide says. "It's waiting to dance on Reid's grave."

Both Durbin and Schumer, for instance, have solicited input from freshman Democrats about how to overhaul the filibuster rule -- with Schumer scheduling a committee hearing on the idea after Durbin started his own work. Schumer pushed for a public option in the healthcare reform bill last year, even though the votes weren't there to get it in the final bill, which some observers thought was an attempt to play to progressives. Durbin strongly resisted an effort by Max Baucus, the Senate Finance Committee chairman, to write a bipartisan jobs bill this year with Republican Sen. Chuck Grassley of Iowa. During the ongoing bank reform bill, Schumer -- who, after all, represents most of the financial world -- hasn't been quite as vocal about bashing Wall Street as he ordinarily would on a populist issue. Durbin, on the other hand, has been a little more visible than he usually is.

Of course, for every interpretation of maneuverings like those that says they're aimed at taking over Reid's job, it's worth remembering that both Durbin and Schumer already have Senate leadership posts and natural constituencies that can also explain what they're up to. Durbin, after all, is the No. 2 Senate Democrat; Reid had assigned him to work on the jobs bill before Baucus showed up and announced he would put together his own version. Schumer, the vice-chairman of the Senate Democratic conference, is right behind Durbin in rank, and his involvement in the healthcare debate made sense no matter what -- he's on the Finance Committee, which was writing the bill. And geography plays into the Wall Street stuff for Durbin as well as for Schumer; if derivatives get regulated, they may wind up traded on the Chicago Mercantile Exchange.

If Reid loses and the race to replace him does come down to a showdown between the two men, Schumer might have an edge. As chairman of the Democratic Senatorial Campaign Committee in 2006 and 2008, he helped elect 14 new members -- which could be an important bloc of votes in the closed-door, secret ballot leadership elections. Durbin, though, has worked his way up the ranks, serving as the No. 3 Senate Democrat when Reid was Democratic whip under former leader Tom Daschle -- who lost his own reelection race in 2004, the first time a sitting party leader had been defeated since 1952. In the tradition-bound Senate, waiting your turn is a good way to win the trust of veterans.

Campaigning for the job now doesn't help anyone -- not Durbin, whose chief claim on the post might be loyalty to Reid, or Schumer, whose chief liability may be a reputation for being too self-aggrandizing. (Needless to say, discussion of who will succeed him doesn't benefit Reid, either.) Durbin is a little less nakedly political than Schumer, and it won't be easy for him to make moves aimed at the majority leader post without people noticing. Schumer, on the other hand, probably can't afford to do much anyone might read as campaigning, lest he look ambitious.

A contest between the two of them would be sure to make for some tense dinners at the house Durbin and Schumer share. Both of their other roommates, Miller and Delahunt, declined to talk about an intra-house leadership race. On the other hand, Durbin and Schumer have been friends for years; Schumer got to the Senate just two years after Durbin did, and they've worked together in leadership for a while. At a press conference with Reid on Thursday, both of them joined in -- as loyal Democrats -- to call out Senate Republicans for opposing the bank reform bill.

And, of course, Reid hasn't lost yet. His leading Republican opponent, Sue Lowden, has less than $270,000 in the bank, compared to Reid's $9 million -- and she spent this week defending her suggestion that people should pay for healthcare by bartering, possibly with chickens. (Yes, chickens.) There could also be three independent candidates, plus a "none of the above" option on the ballot. If Schumer and Durbin want to ensure domestic peace and happiness next year, they're probably both pulling for Reid to make a comeback.