By settling in Jerusalem and expelling Palestinians, Israel is making a two-state solution impossible 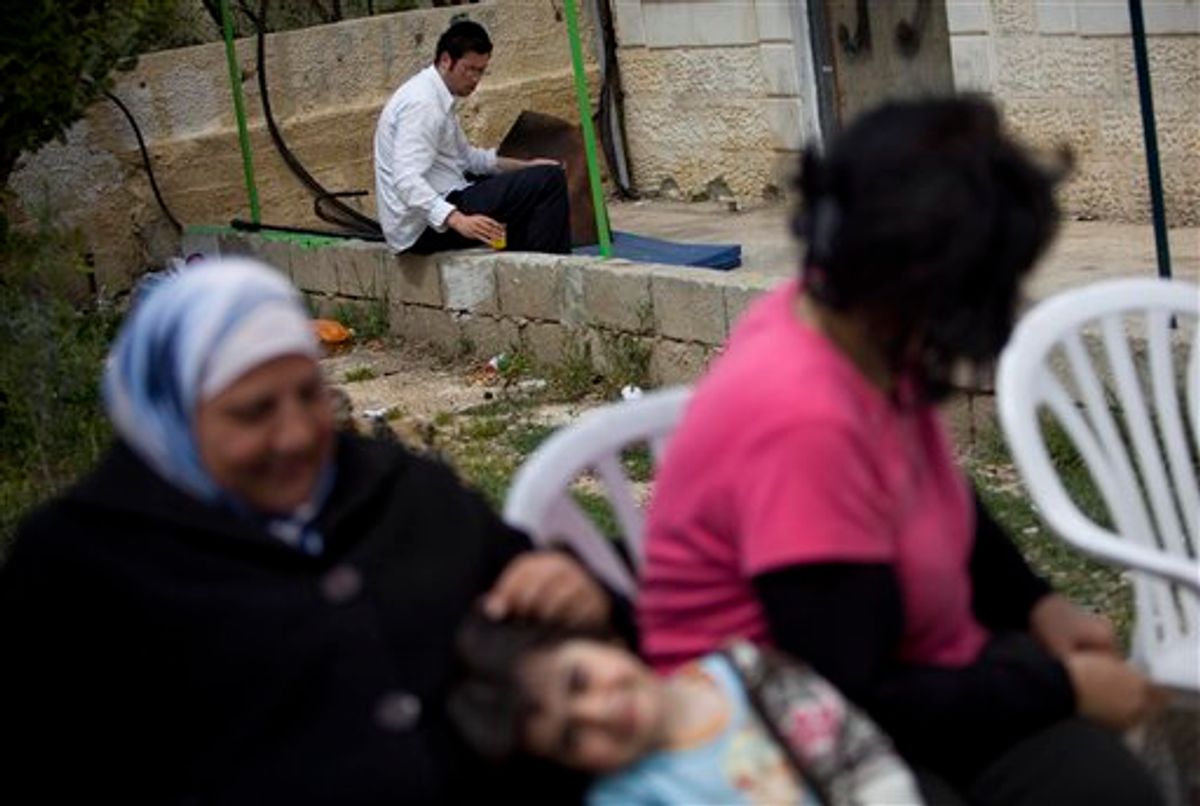 A Palestinian family sit outside a disputed house as Jewish settler rests at the house door, in the east Jerusalem neighborhood of Sheikh Jarrah, Thursday, March 25, 2010. Following a seemingly chilly reception at the White House, Benjamin Netanyahu is learning the hard way that he can't have it all. The Israeli leader will not likely be able to settle east Jerusalem with Jews and maintain strong relations with the Obama administration. He will be hard pressed to please his far-right coalition partners and still negotiate credibly with the Palestinians. (AP Photo/Bernat Armangue) (AP)
--

The new Israeli policy of deporting Palestinians from the West Bank on arbitrary grounds has kicked in with Ahmad Sabah, who has just been deported to Gaza and separated from his family in the West Bank. The measure contravenes the Geneva Convention of 1949 on the treatment of occupied populations, and it also goes contrary to the undertakings Israel made toward the Palestine Authority in the course of the Oslo peace negotiations.

The episode underlines the ways in which their forced statelessness leaves Palestinians (almost uniquely among major world nationalities) completely vulnerable to loss of the most basic human rights. That he was forcibly moved to Gaza by the Israelis suggests that many of those singled out for potential deportation from the West Bank may be moved to the small slum along the Mediterranean, which the Israelis have cut off from its traditional markets and which they keep under a blockade of the civilian population (a war crime). The Israeli establishment has decided not to try to colonize Gaza, and its isolation and hopelessness make it an attractive place for them to begin exiling West Bank residents, thus making more room for Israeli colonists.

The new policy, which is illegal six ways to Sunday in international law, is the brainchild of the government of far right-wing Likud leader Benjamin Netanyahu.

Netanyahu, an Israeli hawk and expansionist, slapped President Barack Obama in the face again Thursday when he confirmed that he refused to halt construction of new homes in Palestinian East Jerusalem, which is militarily occupied by Israel.

Netanyahu’s announcement is probably the nail in the coffin of any two-state solution to the Israeli-Palestinian conflict (in which the Israelis have thrown most Palestinians now living beyond the Green Line off their land and deprived them of citizenship in a state and all the rights that go with such citizenship). Palestinians are so despairing that only 57 percent even believe in having an independent Palestinian state any more. The rest are resigned to becoming Israelis in the distant future, when demographic realities and perhaps world-wide boycotts of Israel for its apartheid-style policies toward the occupied Palestinian will force Israel to accept them.

At the same time, Netanyahu tried to throw sand in peoples' eyes by talking about recognizing an ‘interim’ Palestinian state with "temporary" borders.

Palestinian leaders reject this formulation, which is intended to allow the Israelis to continue aggressively to colonize Palestinian territory while pretending that they are engaged in a "peace process." The Palestine Authority, established in the 1990s, was already a sort of interim state then, and Palestine's borders were then "temporary." So temporary that Israel has made deep inroads into them through massive colonies and building a wall on the Palestinian side of the border, cutting residents off from their own farms and sequestering entire towns and cities.

Netanyahu’s various moves this week, from illegally expelling a Palestinian from the West Bank to Gaza -- to blowing off the president of the United States and hitching his wagon to massive increased colonization of Palestinian land -- all of these steps are guaranteed to mire Israel in violent disputes for years and perhaps decades. And the U.S., which has already suffered tremendously in Iraq and elsewhere from its knee-jerk support of illegal and inhumane Israeli policies toward the Palestinians, will suffer further.

Meanwhile, in the wake of a vicious attack on Barack Obama by New York Senator Chuck Schumer, Steve Clemons of the Washington Note frankly wonders whether Schumer understands he is in the U.S. Senate or whether he is under the impression he is serving in the Israeli Knesset.