The next Catholic abuse scandal: Crimes against women 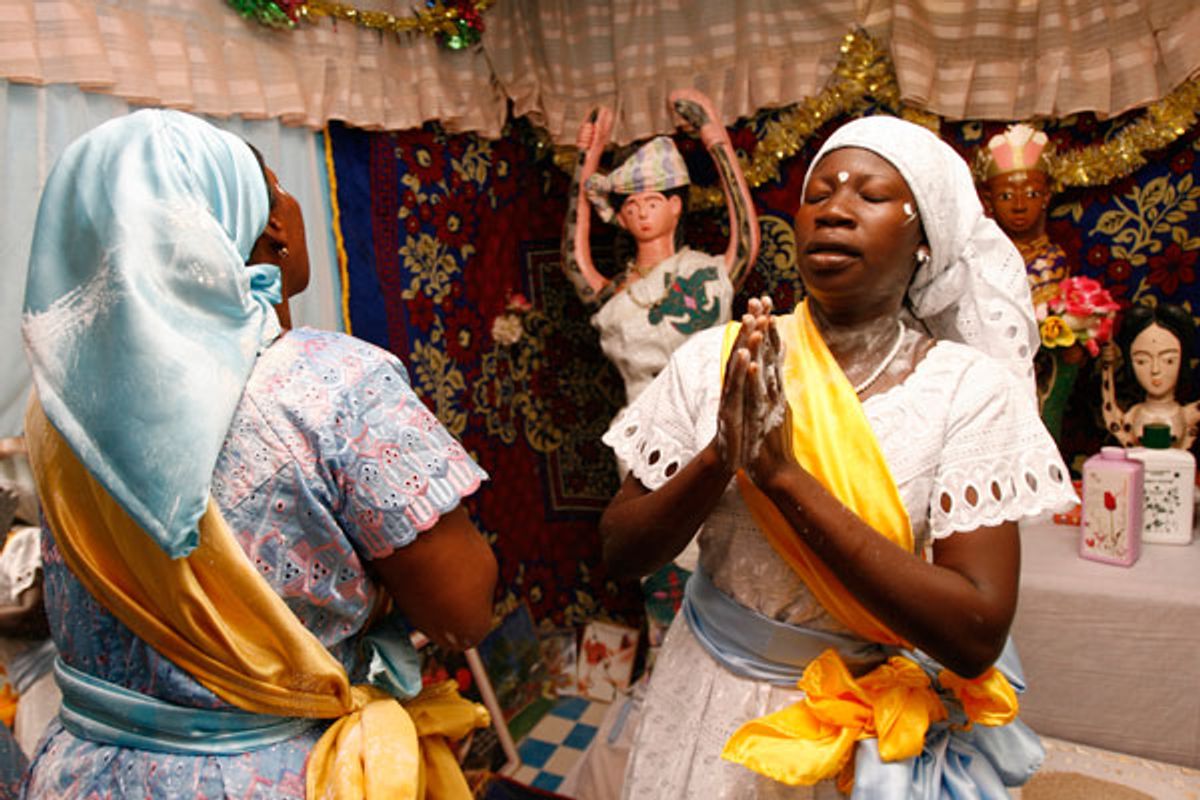 Messouma, a priest of the traditional African Bosson religion, prays with another follower of the faith at the altar of Mami Water after performing the ritual Ahouwe purification dance in Aniassue on the eastern Ivory Coast.
--

We now know that the sex abuse crimes involving Catholic clergy first reported in large numbers in the United States may have been committed in equally high numbers in Europe. Amazingly, in these two relatively sophisticated places, parents, nuns, teachers and both religious and civil authorities --  Catholic and non-Catholic -- were willing to be blind to the often obvious occasion of sin. And they ignored the Catholic laity in the pews, preferring instead to make deals with Rome, or at least to respect its jurisdiction.

More disturbing, though, is that  Catholic leaders continue to trivialize the growing scandal of sexual abuse in Africa and Asia. What started as a hurricane of sex scandals in the First World may well become a tsunami of charges from the Third World.

The rumblings from India and (especially) Africa, where the Catholic Church is seeing its greatest growth, are growing louder.  The news from these places exacerbates our shock and concern: The sexual abuse of children by clergy is now coupled with widespread reports of rapes of nuns -- young women recruited from India's and Africa's poorest families.

Sex crimes against women by Catholic clergy may give more credence to ongoing arguments against the celibate priesthood. Daniel Maguire, a now-married former priest and a professor of religious ethics at Marquette University,  has wisely observed that "enforced celibacy that is not job-related is such an invitation to pathology."

In Africa, however, where Catholic priests often have open heterosexual contact, the church's ranks are hefty with converts only a few generations removed from the illiterate, poor, uneducated innocents that missionaries first discovered living in tribal communities. Totally unaware of concepts like gender equity or criminal punishment for sexual assault, many of those locals came to a church that offered food, medical care and education in exchange for religious conversion.  If there were crimes also committed around them, congregants paid for their survival with their silence.

The crisis of religious abuse in Africa and India was brought to Rome's attention in 1998 when a four-page paper titled "The Problem of the Sexual Abuse of African Religious in Africa and Rome" was presented by Sister Marie McDonald, mother superior of the Missionaries of Our Lady of Africa. A March 2001 National Catholic Reporter article detailed McDonald's claims, which included accounts of sexual abuse by priests and bishops.

McDonald quoted a vicar general in one African diocese who talked "quite openly" in Rome in 1996 about celibacy in Africa, saying, "Celibacy in the African context means a priest does not get married, but does not mean he does not have children."

The AIDS pandemic in Africa and India is said to have made nuns "safer" sex partners and, also for that reason, targets of priests seeking sex. (Some nuns also reported sexual abuse by mothers superior.) The women, culturally brainwashed not to challenge men or female figures of authority, felt they had no choice, and the priests took further advantage by arguing that Catholic rules for priests required them to have sex "only with virgins."

More allegations came from Sister Jesme, an ex-nun from the Indian state of Kerala, who told of sexual abuse and forced homosexual relationships in a 2009 autobiography. But when the book was released, a spokesman for the Syro-Malabar order of the Catholic Church in India dismissed it as a "book of trivialities."

"It's her experiences," he said, "but these are things that might creep into a society of communal living." He added that the church would not be shocked by the allegations, concluding, "The church knows about these things."

All of these public allegations fell on deaf ears. Neither Rome nor the world cared to demand justice for the nuns also sexually victimized by Catholic clergy. Like news stories of wives in burqas being stoned to death in Islamic strongholds, tales of nuns raped by priests and bishops did not even merit a sound bite on the evening news and were soon forgotten.

But now the world is on the verge of hearing more about suspected or known rapist priests in these parts of the world, where isolated and unsuspecting  women may have been criminally assaulted and threatened into silence. When that happens, the usual disgusting pedophilia stories will be joined by tales of crimes against women, too long underreported, unreported and just ignored.

For more than 100 years, until just over two decades ago, the infamous Magdalene Laundries in Irish convents held young women in indentured servitude, often to be sexually abused by priests and religious superiors. Those who died from illness or while giving birth disappeared into the convent graveyard. Their stories only came to light at the end of the 20th century, when courageous former residents came forward and mass graves were discovered on former convent grounds. The Irish government was complicit in the Magdalene scandals, and cases are still pending in Dublin for recognition of and compensation for the wrongs suffered by so many young girls and women.

The outcry over the Magdalene scandal, however, could pale against the deafening wail about to be let loose in Africa and India, when all of these victims raise their voices against a church that has taken sinful and criminal advantage of innocence far beyond Boston, Dublin and Munich.

When that other shoe falls, the world can wonder once more how Rome kept everyone silent for centuries and why fate has chosen this moment for the truthful floodgates of pent-up suffering to spill open?

Mary Ann Sorrentino, author of "Abortion: The A-Word," writes for Salon each Friday. Her email is thatmaryann@yahoo.com.