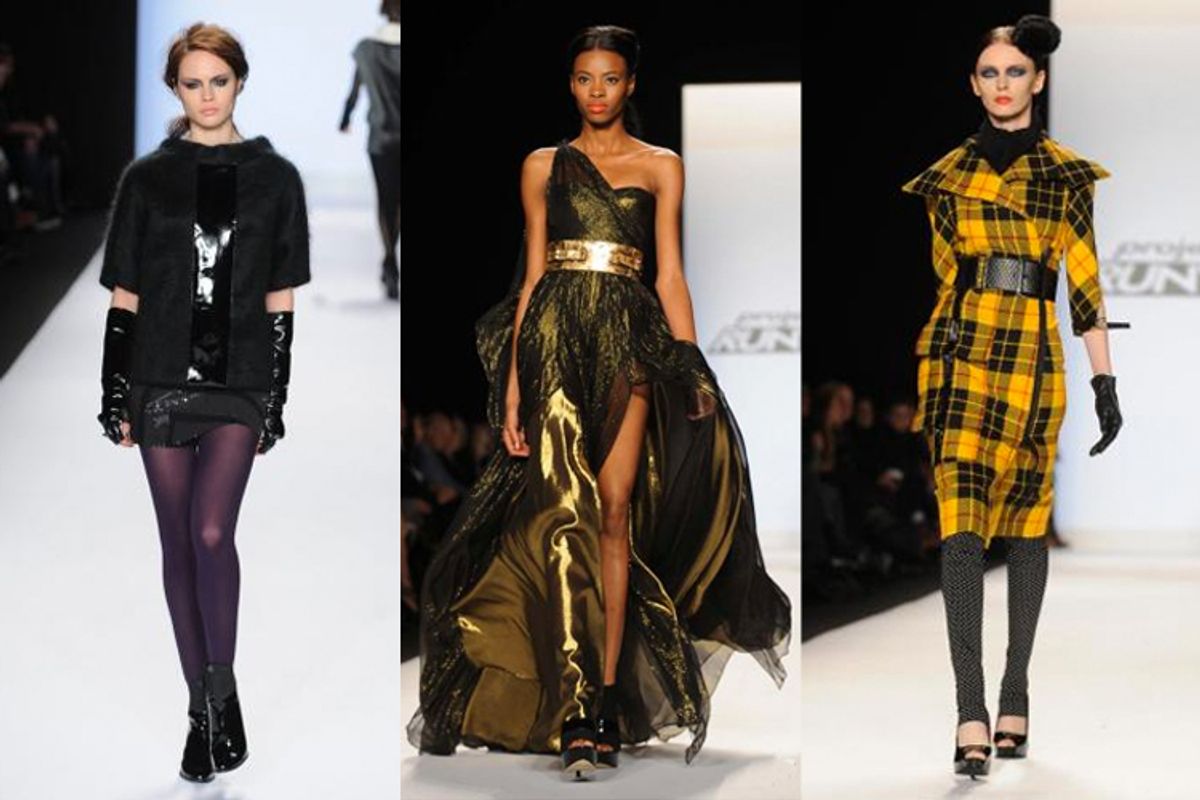 The long, long, very long wait is over. The "Project Runway" finale is here! Poor Jay got ousted by Mila last week, so our three finalists are Mila, Emilio and Seth Aaron. I am expecting quite a bit of black on the runway.

We start the episode with the finalists leaving the hotel and entering the workroom one last time. They immediately start to criticize each other's work. Mila says Seth Aaron's collection looks like a very glam Hot Topic  and that Emilio's could have appeared in any boutique in Harlem ... in 1994. Emilio says Mila's collection is severe and demure (are those words opposites?). Seth Aaron says Emilio's looks like an "older" collection. Like, for elders I'm assuming.

Tim walks in rocking the leather blazer he's been wearing all season. He is shocked by Seth Aaron's 24 looks (only 10 are required), says rather coolly to Emilio, "Haven't we seen this before?" and reminds Mila to rough up her styling a little bit.

We proceed to model casting, where the designers are forced to watch legions of leggy girls with amazing cheekbones parade in front of them. Mila wants an edgy mix of rocker/Hollywood/New York. Emilio wants multicultural, because the world is multicultural. Seth Aaron is merely looking for the "right vibe." There is no fighting, and one can assume that the models are successfully cast.

They then proceed to the makeup room. I'm not saying the name of it. You all know what it's called. Mila wants dirty and gritty eyes for her girls. Emilio wants an uptown New York girl look. Seth Aaron wants a really bold, dark eye.

They then proceed to the "insert shameless plug here" hair studio, where Mila is happy with her model's rock 'n' roll hairstyle, which doesn't really look much different from Mila's real hair. Mila is her own muse, apparently. The other two do variations on soft, sophisticated ponytails.

The Lifetime Moment of the Show comes next. Emilio, rather graciously for a change, thanks everyone who believed in him. Seth Aaron cries and thanks his family.

They are off to bed, then quickly woken at 2:40 a.m. by the alarm clock. They walk up the dark, slushy streets to the tents at Bryant Park. They stand on the runway and stare. I get the chills. Then Seth Aaron lays down and pretends to make snow angels on the runway. If a model trips in that spot there will surely be hell to pay.

The backstage mayhem begins. It's edited to seem rather controlled, actually. That is, until Mila realizes that she is missing three of her models and Emilio is missing one. They probably stopped for some food. They never show up, and Tim has to call in the alternates. Tim seems very composed, but he gives away a bit of anxiety by repeating everything three times. "Go, go, go." "Hurry, hurry, hurry."

It's time for the show to begin, and Heidi appears on the runway. She introduces Michael Kors, Nina Garci, and Faith Hill as the judges. Correct me if I'm wrong, but isn't Faith Hill a country singer? Oh, but I forgot. Country singers are known for their tasteful sartorial choices.

Seth Aaron starts the show with a collection inspired by 1940s German and Russian military looks. I like it already. He sends his signature strong-shouldered jackets and lots of red and black that manages to not look tacky. Most surprisingly, he sends an amazing, flowy T-backed tunic that is a complete departure for him, yet fits perfectly in his collection. He also sends a bright purple dress that looks like a crumpled up piece of plastic wrap.

Mila sends a lot of black and white looks, still very '60s inspired, but she does a better job styling and her models don't look dated. There are lots of tunics and leggings, and the gorgeous paillette dress that we saw last week.

Emilio calls his collection "Color Me Bad," although I hear "Color Me Badd," that horrid band from 1991. Which actually is appropriate, because Mila is right: his clothes are right out of 1994. Even Raven-Symoné (who?) thinks he's doing a '90s flashback; she approves. He uses every jewel tone under the sun, and a not-at-all-egotistical abstract print that spells out "E. SOSA." Subtle.

A bunch of semi-celebrities are interviewed about which collection they liked the best. Of course, the answers are mixed. But the best part of this is that Ping is back. And she has gray hair, which according to a recent New York Times article, is very trendy now.

After the show, the designers are greeted quite politely by the judges, and the critiques start. Seth Aaron is first. Michael loves the collection and compliments Seth Aaron's ability to craft clothes and to put on a show with "kaboom and pow." He is happy that the clothes look more luxurious. Nina says it's a very editorial collection, but filled with clothes people can wear. No one likes the purple dress, though.

Emilio is inspired by classic American sportswear. He is also well received by the judges. They like the sophistication and Faith Hill LOVES the print. Nina says it is a quiet and sophisticated collection, but she wishes there were a better transition between all the tailored pieces and the final gown that Emilio sent. Michael says it is more of a line than a collection and that it is the most commercial.

Mila was inspired by shadows and the layers and texture they produce. Heidi loves it and compliments the more modern styling. Michael Kors congratulates her for making it contemporary then sends me running to Google when he says, "You kicked out the girl in the cage doing the frug." Michael cements my undying love for him when he tells Mila that when she plays with shine, "It turns me on. It's a little nasty in a good way."

It is a very difficult choice for the judges. Mila is great at mixing textiles, but her collection wasn't surprising. Seth's collection is luxurious and has great hanger appeal, but the judges worry that his clothes can get too overwrought. Emilio was thinking more about business than a show-stopping collection.

Mila is the first to be auf'ed. Then there is the interminable pause before SETH AARON is declared the winner. Emilio is clearly miffed, though he hugs Seth Aaron.

This season we met Ping. We saw Ricky do trashy clothes. We saw Anthony leave and come back and leave again. We saw Maya leave. We saw drama, we saw cheesy commercials on Lifetime, and we saw clothes.

The producers are currently casting for season eight. I'll be watching.