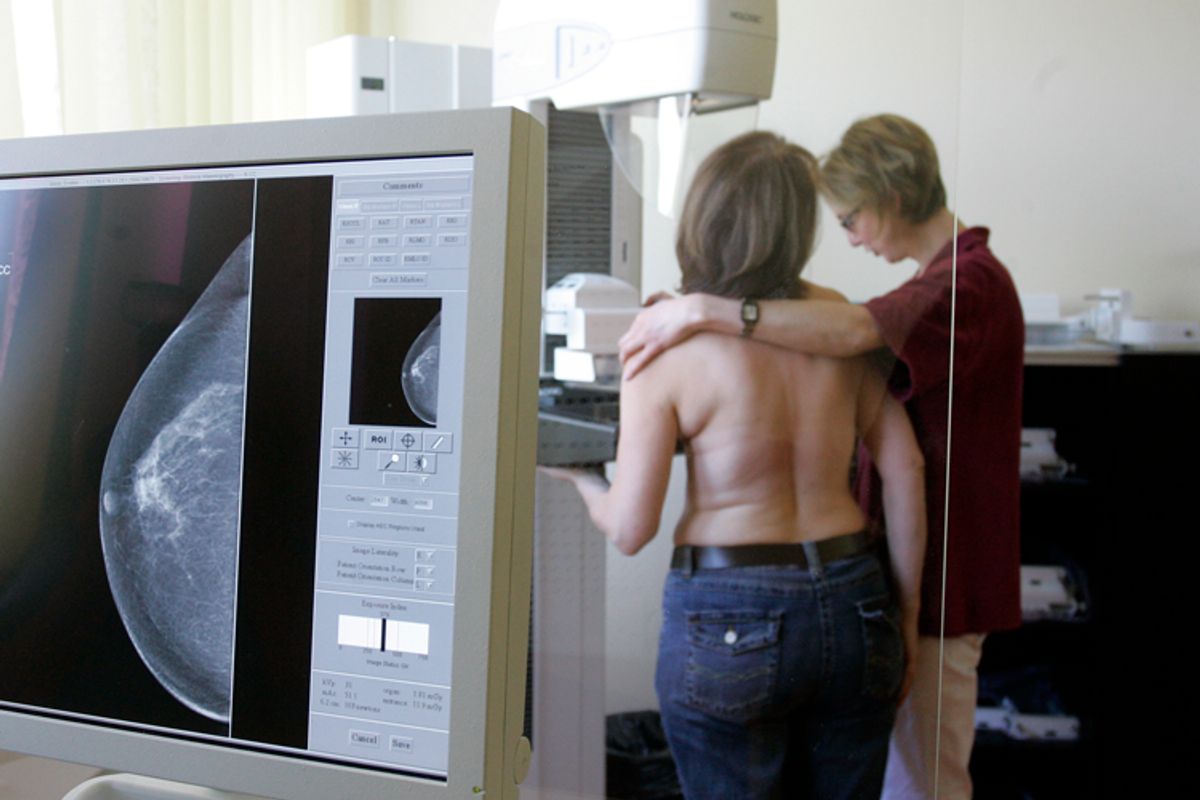 There comes a time in every ladyblogger's life when your capacity for shock and disgust plateaus. I like to call it Feminist Outrage Fatigue.™ We all suffer it from time to time, and the only cure is something so backwards, despicable and downright evil that you are jolted out of your shoulder-shrugging apathy. Well, today I came across just such a news item -- one that  reactivated the keyboard-banging, ALL-CAPS TYPING, forehead-slapping, eyeball-gouging, and all those other well-worn feminist blogger cliches. In an exclusive, Reuters reports that WellPoint, the largest health insurance provider in the United States, routinely drops female policyholders recently diagnosed with breast cancer.

The company allegedly uses "a computer algorithm" that targets every "policyholder recently diagnosed with breast cancer," says Reuters. "The software triggered an immediate fraud investigation, as the company searched for some pretext to drop their policies, according to government regulators and investigators." Then, WellPoint "canceled their policies based on either erroneous or flimsy information." On Friday, Department of Health and Human Services Secretary Kathleen Sebelius responded to the Reuters report by writing a letter urging WellPoint "to immediately cease these practices and abandon your efforts to rescind health insurance coverage from patients who need it most."

In response, WellPoint has come out swinging -- first, with a press release alleging factual errors in the Reuters piece and, second, with a letter in response to Sebelius. The insurer claims that it uses a program to catch conditions that policyholders likely knew about before applying for insurance, and said it "does not single out women with breast cancer for rescission. Period." Neither press release offered an explanation for why a Congressional committee found that, when it comes to rescission in general, WellPoint was "one of the worst offenders," as Reuters put it.

Make of that what you will. What we know for sure is that the shady practice of rescission is not at all unusual. As Reuters explains, it has already been documented that "tens of thousands of Americans lost their health insurance shortly after being diagnosed with life-threatening, expensive medical conditions." However, WellPoint's alleged focus on breast cancer patients is unique. If Reuter's report is indeed accurate, it's rather sickening that the insurer's CEO "has earned plaudits for how her company improved the medical care and treatment of other policyholders with breast cancer."

In her letter to WellPoint, Sebelius was careful to note that "the practice described in this article will soon be illegal" and that "the Affordable Care Act specifically prohibits insurance companies from rescinding policies, except in cases of fraud or intentional misrepresentation of material fact." Unfortunately, many experts remain unconvinced that the healthcare bill will outlaw -- or even do much of anything to prevent -- rescission.