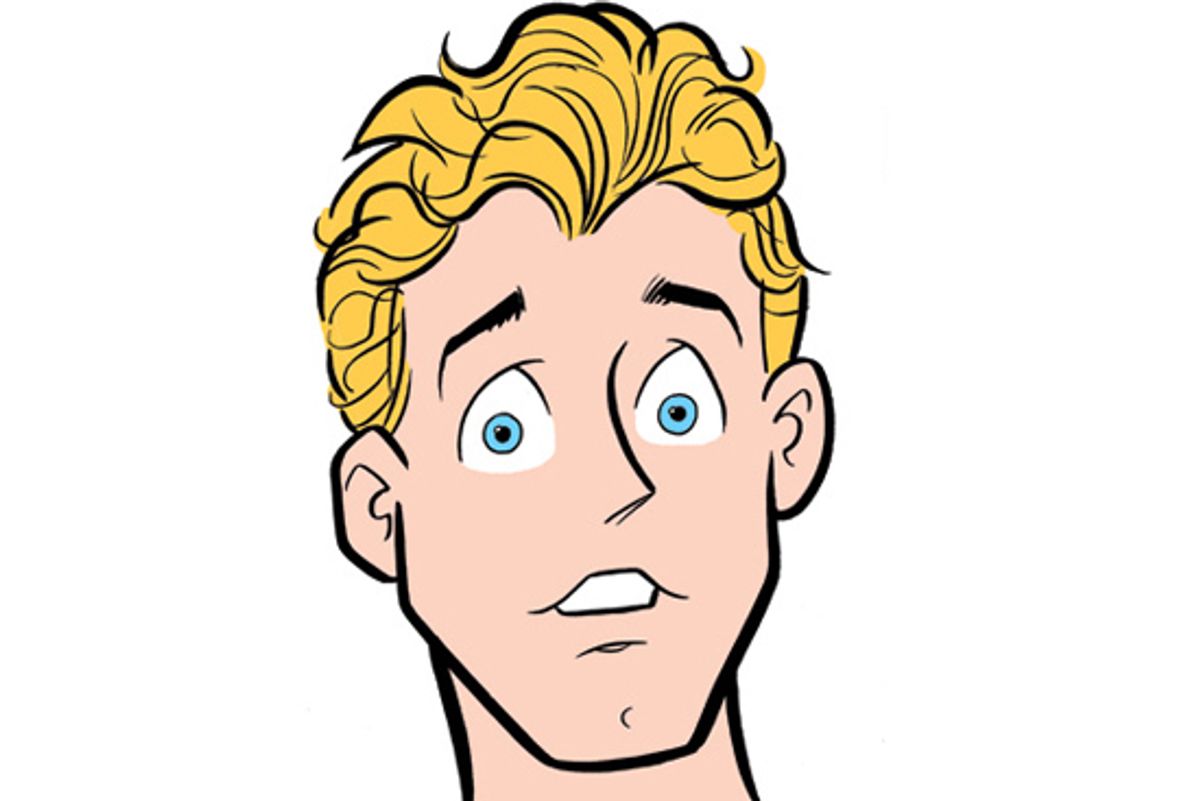 The reaction to Thursday's announcement that Archie Comics' Riverdale High would now include a gay student was as predictable as, well, an Archie Comics plot: hand-wringing and high-fiving, raised eyebrows and rolled eyes. Veronica No. 202 (cover caption: "Meet the Hot New Guy!"), written and drawn by veteran Archie artist Dan Parent, will introduce slender, blond Kevin Keller. From the few pages of the story released so far, it appears Parent is treating Kevin's orientation as a surprise but not a shock: The hot new guy is being pursued by Veronica but has no interest in her, Jughead advises him that she's pretty persistent, and Kevin declares that "it's nothing against her! I'm gay!" To which Jughead's immediate reaction is deciding to to wait and let Veronica figure it out for herself, and the plot goes on.

Kevin Keller, it's worth noting, isn't the first openly gay character in American comic books by a very long shot -- he's just the first character to say "I'm gay" on a panel in an Archie comic book. In superhero comics, it's old news (and in art comics, it's very, very old news). The recently announced Batwoman series by J.H. Williams III and W. Haden Blackman will be, as far as I can tell, the first ongoing superhero comic book with an openly gay title character and a Marvel or DC logo on its cover -- but "ongoing," "superhero," "openly," "gay," "title character" and "Marvel or DC logo" are all qualifiers in that description, because otherwise Starman or Renee Montoya or Freedom Ring or Midnighter or any number of other possibilities got there first.

The significant distinction here is that, unlike superhero comics, Archie comics are specifically aimed at kids (well, and at aging collectors who remember reading them as kids, but the kids are the primary audience): They're a fantasy about what high school will be like. That's why the addition of Kevin to the series' endless comedy of desire and disdain is welcome and long overdue. The social fabric of high school is going to include gay people, and the sooner kids (and aging collectors) take that as much for granted as they do the Archie/Betty/Veronica love triangle, the better.

Outside the "safe world for everyone" that Archie Comics' Jon Goldwater says Riverdale represents, this is, of course, a hot-button issue, and if Archie Comics actually wanted to suggest that it's no big deal, they'd have just published the story instead of announcing it via press release long before it appears. (Honestly, somebody protesting a fictional character's entirely chaste homosexuality would be the best possible publicity for this project.) It's safe to assume that the primary audience for this particular issue of Veronica -- which won't be in stores until September -- will be people who haven't bought an Archie comic in decades, unless they also bought those similarly hyped-up comics a few months ago in which a future Archie married Betty or Veronica.

The comics-historical significance of Kevin's appearance is that it marks a shift in the Archie franchise's history. The Riverdale gang appeared in a series of very conservative Christian comic books in the '70s and '80s. And in 2003, playwright Roberto Aguirre-Sacasa -- who's also written for Marvel Comics and "Big Love" -- wrote a play called "Archie's Weird Fantasy," which involved older, gay versions of the Archie characters, and was blocked by a cease-and-desist order shortly before its premiere. (It was promptly rewritten as "Weird Comic Book Fantasy.")

So how big a deal will Kevin end up being in the long run? Probably not much of one. Parent has noted that the Archie line has been trying to expand the diversity of its cast, but as Chris Sims has pointed out, the last new character who's actually appeared in Riverdale more than a few times was introduced something like 35 years ago. Even if Kevin sticks around, it's hard to imagine him having a role beyond "the token gay guy." That's just hard-wired into the premise of the last 68 years' worth of Archie comics: There's a small, limited group of characters, and everyone gets exactly one personality trait. And it's safe to assume that the first same-sex kiss in an Archie comic is a good long ways off -- the interracial kiss on the cover of this week's Archie No. 608 was a long time coming, too.

So, yes: Archie's bosses get points for trying to make Riverdale a slightly less 1940s vision of what American culture is like, because stories for children don't just reflect the world, they shape it. But the proof that the Archie characters don't live in a world where everyone is heterosexual won't be the first story Kevin Keller appears in -- it'll be the 40th.