How to make mayonnaise, the King of Sauces

It's science! It's magic! And here are the tricks to make it stress-free, too 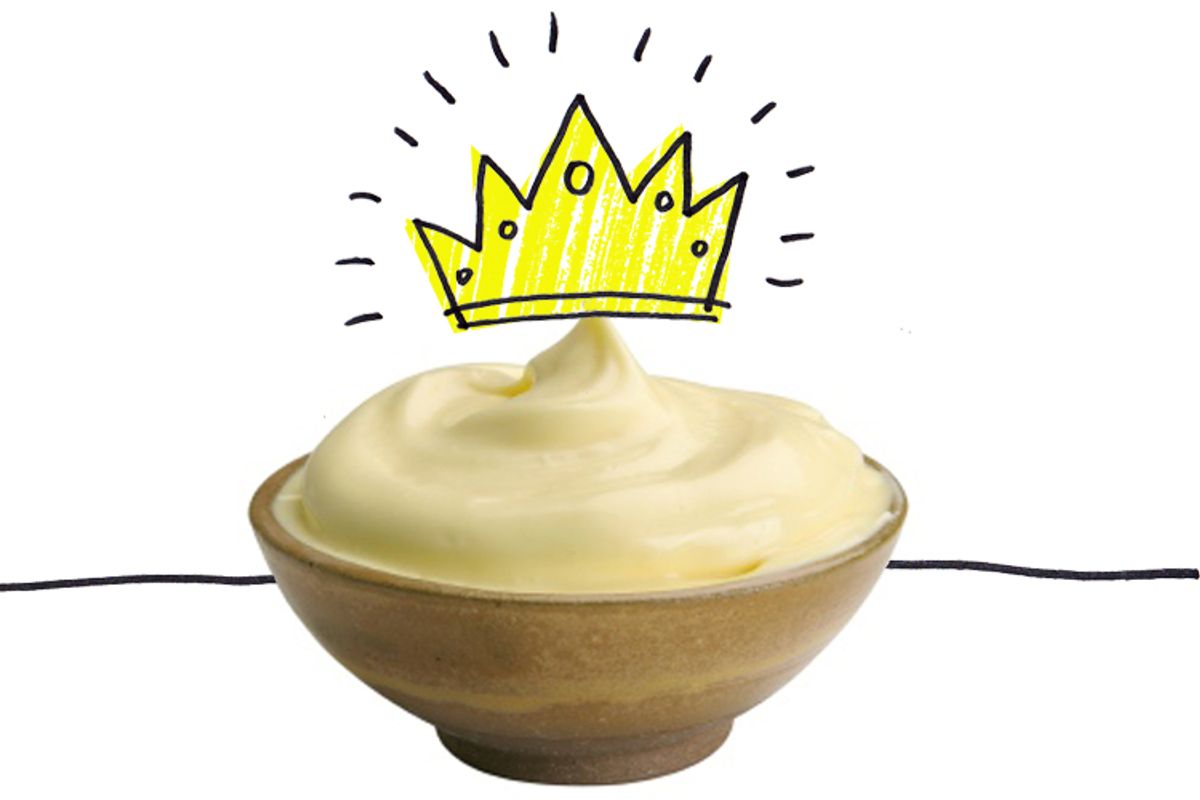 I'm all for diversity and tolerance, but I have my prejudices: I look upon people who don't like mayonnaise with a mixture of pity and terror. One second, I'm all, "There, but for the grace of God, go I," and the next I'm like, "What if they let you breed?"

I'm not proud of this, but look: Mayonnaise is the King of Sauces. On its own, it's the all-purpose sauce of the South. You add some buttermilk and some garlic powder or whatever, and it's ranch dressing, aka Midwestern Sauce. Mix in some garlic and extra virgin olive oil, and it's aioli -- Mediterranean Sauce. Add some chipotle peppers to it and, well, there are whole swaths of the restaurant industry that serve the indigenous cuisine of Chipotlemayolandia. Basically, a love of food necessitates a certain love of mayonnaise, and if I need to explain to you what's good about mayonnaise, our friendship is probably not going to go very far. At least not today, because mayo is all we're going to talk about -- what it is, how it works, how to make it, and how to fix it if it breaks on you.

There is, I admit, a certain level of faith involved. You have to believe in its goodness, because when you really start looking into mayo, it kind of falls apart. (And sometimes, when you make it, it does fall apart, and nothing tests the faith of a cook like a broken mayonnaise.) It's a little shocking to realize that it is basically a sauce of lemon (or vinegar) and oil -- up to 80 percent oil, in fact. Its rich, beguiling creaminess doesn't come from dairy, but from the magical way the oil hits your tongue when it's bound up in an emulsion. Instead of tasting and feeling flabby and greasy, it's tight and focused, its flavor magnifies whatever it's with, and lingers beautifully.

How can oil and lemon juice turn into the white cloud of goodness called mayo? Or, the magic of emulsion.

Mayonnaise is an emulsion, a mixture of oil and water against their nature or better judgment. Usually, what happens when you put oil and water together is that the oil molecules are attracted to themselves, the water molecules are attracted to themselves, and it's like the nerds and jocks in the high school hallway. (The oil floats on top because it's less dense than water, but that's beside the point.)

When you shake or mix them up, the oil and water will disperse into each other for a moment, but soon, the like molecules will find each other and recombine, separating -- or "breaking" -- the mixture. If you mix them with greater physical force -- in a blender, say, rather than by hand with a whisk -- you're dispersing the oil and water into more, tinier droplets, so it takes them longer to find each other and recombine. But they will eventually. Oh, they will.

Unless you have something getting in the way. In the vinaigrettes we talked about last week, seasonings like mustard, sugar or powdered spices can help stabilize the mixture: As Shirley Corriher puts it in her classic food-science cookbook, "Cookwise," these powders will coat the droplets of oil, "as if dusted with a powder puff," and prevent them from sticking back to one another. But these are just stabilizers, like fingers in the dam, and given time (maybe a long time, but still), these mixtures will break.

But there are also true emulsifiers -- most famously lecithin, found in egg yolks -- that can permanently join oil and water. These emulsifiers have a water-attracting end and an oil-attracting end, which really lets them get in the way. The oil-loving ends crowd into a droplet of oil, forming a "shield" of water-loving ends on the outside, which then serves to coat it in water, separating it from all the other oil droplets. (Click that link for a diagram.) Repeat this millions of times over, and you have a permanently suspended mixture of oil in water. (For a more complex discussion of the science, check out "Cookwise," or Harold McGee's "On Food and Cooking.")

Why is mayonnaise thick?

Once emulsified, the mixture refracts light differently (hence its whitish opacity) and becomes thicker. The thickness comes from the fact that the oil droplets are dispersed in water, but there's really not much water to go around. (Remember, mayo can be about 80 percent oil.) Most of the water comes from the lemon juice or vinegar, maybe mustard if you're using it, and whatever water is naturally in the egg yolk. It's weird to think about, but as you add more and more oil, the "net" of water that forms around each molecule of oil gets "stretched," and so the whole mixture kind of tightens up, becoming thick. But it's this thickness that makes mayonnaise -- it's what makes it spreadable, what makes it taste and feel different than a greasy, runny mess, and what focuses its flavor on your tongue, almost like a solid rather than a liquid.

OK, just a few more things to keep in mind before we get to making the good stuff.

• There is a chance that the emulsion won't come together for you. The mayo might break as you make it. Don't panic! It's horrifying to see your beautiful sauce fall apart, turning into a greasy mess of slime and oil, but don't let it shake your faith. We can fix it. Or you can start over.

• Have everything at room temperature before you start; cold oil and cold eggs don't flow as freely as warm, and so they won't combine as thoroughly, making the emulsion more risky.

• Because I'm a down-home kinda guy, I like to separate egg yolks simply by breaking the egg into my hand and opening my fingers slightly to let the white fall off. Just wash your hands first.

• The choice of oil is up to you. I prefer a mild-tasting vegetable oil like corn or canola. I warn you against extra virgin olive oil, though, because 1) while I lurve it, emulsified I often find it very bitter and harsh-tasting (weird, I know); 2) it has a tendency to break more (weird, I know); 3) it's expensive if you screw it up! If you want that flavor, make the mayo with vegetable oil, and whisk in some EVOO at the end, as if it were a seasoning.

• I like using a whisk, because I'm old school and because it's more interesting to watch the process and because I don't like cleaning my blender or food processor. But to be honest, blenders or food processors make for a more fail-safe mayo. (Remember what I said earlier about breaking the liquids up into tinier droplets?)

• And after all is said and done with emulsification, remember that your mayo's got to taste good. Last week, we talked a lot about how to balance flavors in vinaigrettes. The most successful ones, to me, are ones in which the tartness from the lemon or vinegar and the richness and softness of the oil are so even that you can't really pick them apart from one another. (Of course, lemon or vinegar are much stronger-tasting than oil, so balance is not just a matter of measuring them equally.) That's my preference; you may have your own. But taste, taste, taste as you make your mayo to know if you should be adding more lemon or more oil until you get the flavor right.

Special equipment: A blender or food processor are great, but a whisk and bowl work just fine. Put your oil in a pourable measuring cup, or something that lets you control how fast you pour.

OMG WTF! Your mayo is a slimy, greasy mess! IT'S OK! CALM DOWN! Get a nice stiff drink and chill out. You can fix it.