"Making Haste From Babylon": The Pilgrims nobody knows 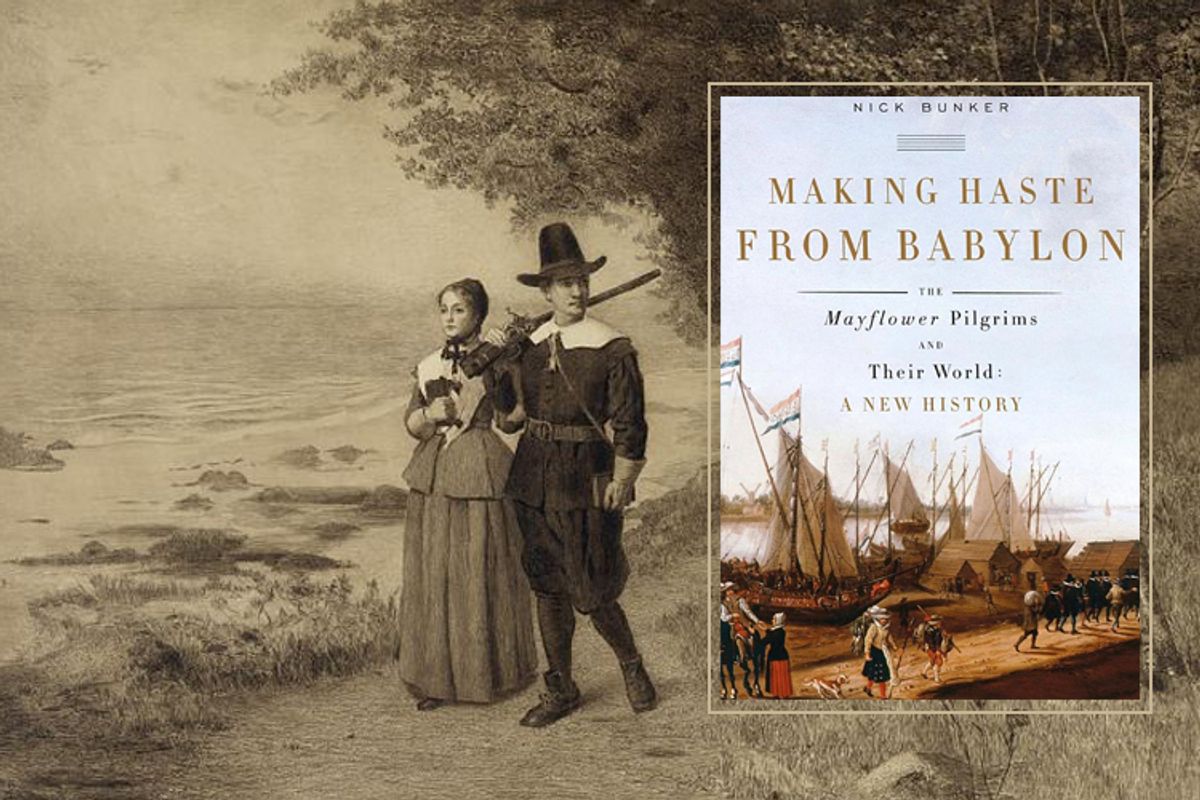 What to Read aims to introduce Salon's readers to a variety of new titles, ranging from current events to biography to fiction. Some seasons, however, overflow with good books in one particular genre; this month, for example, you can really gorge yourself on American history. Last week's pick, "Hellhound on His Trail" by Hampton Sides, is a tightly wound true-crime narrative about the Martin Luther King assassination, but there's also Marla R. Miller's sturdy "Betsy Ross and the Making of America," offering a rare window on the life of a working woman during the Revolutionary War, and Nathaniel Philbrick's forthcoming account of the battle of Little Bighorn, "The Last Stand."

Sides and Philbrick have both written bestsellers in the meat-and-potatoes vein of popular history, turning famous events into seamless, even novelistic tales. Nick Bunker's "Making Haste From Babylon: The Mayflower Pilgrims and Their World" is an altogether different sort of book. Unlike most popular histories, it incorporates a lot of new research, gleaned from primary sources. Most striking of all, it refuses to hew to a straightforward, linear story. If reading Sides or Philbrick can feel a bit like jumping in a raft to be hurtled down a fast-running river through clouds of spray, then reading "Making Haste From Babylon" is like launching yourself onto a meandering stream in a big fat inner tube, gliding into little eddies where you can float and slowly spin, savoring the scenery -- a ruined cabin, a grazing faun, the green cavern created by the boughs of a weeping willow.

Which is not to say that Bunker isn't striving to make a point. The story of the founding of the Plymouth Colony may seem ploddingly familiar to every former American schoolchild -- all buckled hats, blunderbusses and grateful prayers for the freedom of the New World -- but, the author insists, even the (very reliable) contemporaneous accounts of the journey are filled with "omissions, vacancies and unexplained allusions." We have an incomplete conception of how and why the colony was established, a two-dimensional interpretation rooted in sentiment and national myth.

Bunker, a British investment banker turned journalist, has been astonishingly successful in unearthing new material on the subject simply by concentrating his efforts on archives in Britain, where the Mayflower story holds little fascination. He dug deep into sleepy provincial archives of Tudor and Jacobean paperwork -- legal testimonials, contracts, trade and shipping documentation, wills. There he made some impressive finds, such as a deposition confirming the canonical account of how a precursor of the Mayflower group ran afoul of local authorities while trying to flee England for Holland. These documents don't so much overturn the accepted view of the colonists as expand it, revealing them to be both fundamentally English and linked to a transnational web of Protestant free-thinkers.

Were the Pilgrims an isolated, rural people driven out of their homeland by the relentless persecution of James I and his son, Charles I? No and sort of. They came, Bunker persuasively demonstrates, from a much broader region of northeastern England than is usually acknowledged, a surprisingly worldly area filled with educated, Puritan dissenters who thought the Church of England retained far too much of the old, corrupt, Roman Catholic ways. They were established yeomen and small-time merchants who held respected positions in the chain of independent-minded, Calvinist "maritime republics" that lined Europe's coasts. James I alternately encouraged and harried them, depending on how threatened he felt by rebellious Catholics inside the country and at its borders. Economic opportunity and distaste for their dissipated neighbors played important roles in their choice to emigrate.

Then there's the year 1620, when the Mayflower landed at Plymouth. Instead of seeing this as the first great turning point in the nation's colonial history, the date "when America began," Bunker argues that we might consider 1628 as an alternative. That was the year that colonial leaders sailed up the Kennebec River in southern Maine to establish a half-forgotten trading post at a place called Cushnoc, staking their claim as New England's primary dealers in beaver pelts. Only by investing in that highly desirable commodity did the settlers finally prove themselves to be more that mere "dabblers, clinging to their footholds along the coast." Beaver skins -- the single way "the Pilgrims could find the money to pay their debts and finance new supplies from home" -- transformed a tenuous, fragile community into something permanent.

Bunker's curiosity about the deeper roots of historical events and his contrarian impulses drove him to look "backward, sideways, and around and beneath the accepted narratives of migration." Thus, his rather quixotic approach to causality, which is ordinarily the historian's stock in trade. In a typical move, at one point he informs his readers that James I was a "complicated" man more inclined to expel Puritan dissidents than subdue them, but to understand the cause of the king's prejudice we must first "begin at the end of his reign, when the corpse of the Anglo-Scottish king lay on an autopsy slab." Um, OK.

Actually, the relevance of James I's autopsy to his attitudes toward Puritan separatists is not terribly clear; according to Bunker, it has to do with the king's faith in the purgative medical models of his day, as well as his tendency to view the nation as a version of his own body and vice versa. That's a bit of a stretch. On the other hand, it provides us with Bunker's description of the royal autopsy, a masterfully ghoulish scene (one of the king's kidneys was so shrunken the surgeon had to "rummage for it in the dead man's bowels"). I would hate to have missed that.

"Making Haste Toward Babylon" is a patchwork of such vignettes, and their significance (that is, their significance as more than just nifty stuff Bunker discovered in some neglected county records office) isn't always as obvious as the author makes it out to be. This, and Bunker's peculiarly circuitous narrative style, might have torpedoed another book, but Bunker has a secret weapon: He is simply a marvelous writer with a nose for the fascinating anecdote. The king's fugitive kidney, village scuttlebutt about the lecherous shenanigans of one of the Pilgrims' ancestors back in Scrooby, the madly labor-intensive method used to comb beaver fur into "dense, pudding-shaped piles of hair" for making felt -- all of these highlights may or may not be essential to improving one's understanding of the Pilgrims. But if Bunker's destination isn't always as apparent as he seems to think, getting there in his company is a pleasure in its own right. There's some intriguing fact or story on every page of "Making Haste From Babylon."

Furthermore, when he's not rooting around in some dusty archive, the author likes nothing better than to schlep out to the places where the action went down to consider how the terrain might have shaped history. Since most of these sites seem to be salt marshes, mud flats or bogs, call this gum-boot historiography; it certainly infuses "Making Haste From Babylon" with plenty of fresh air. Finally, in the book's epilogue, Bunker climbs onto a ledge of a rock jutting out over the Kennebec River to scrutinize some little-known Native American petroglyphs. He's pretty sure these half-submerged carvings describe an encounter between the Plymouth colonists and the Penobscot tribe. It's a lovely, shivery moment of revelation, and like so much of "Making Haste From Babylon," rich in the thrill of brushing up against the past and its fathomless mysteries.

American History Books History Our Picks What To Read