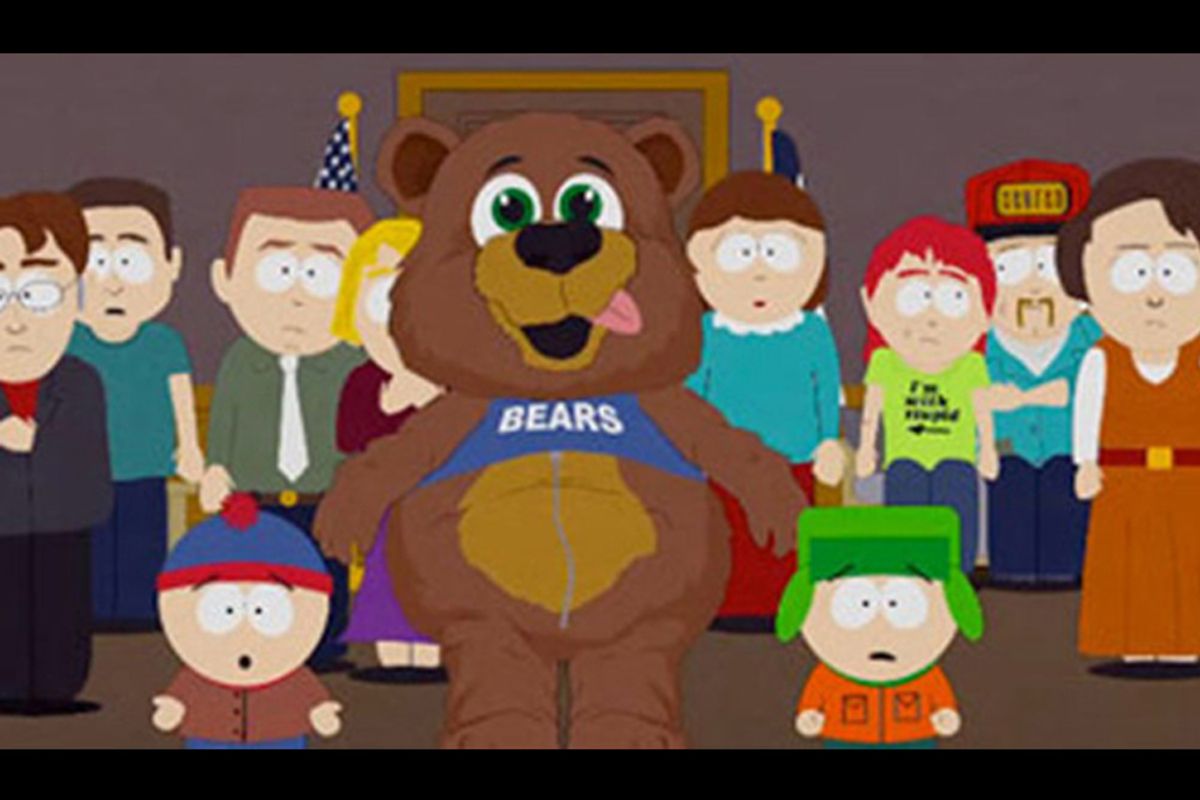 "South Park" depicted the prophet Muhammad in a bear costume earlier this month, which drew a veiled threat from the website revolutionmuslim.com.
--

In a way, the muzzling of "South Park" is no more disquieting than any other example of Western institutions' cowering before the threat of Islamist violence. . . . But there's still a sense in which the "South Park" case is particularly illuminating. . . . [I]t's a reminder that Islam is just about the only place where we draw any lines at all. . . .Our culture has few taboos that can’t be violated, and our establishment has largely given up on setting standards in the first place.  Except where Islam is concerned.

A Texas university class production of "Corpus Christi," by Terrence McNally, below, has been canceled by college officials citing "safety and security concerns for the students" as well as the need to maintain an orderly academic environment, The Austin Chronicle reported. "Corpus Christi," Mr. McNally’s 1998 play depicting a gay Jesus figure, was scheduled to be performed on Saturday as part of a directing class at Tarleton State University in Stephenville, Tex. But early on Friday, Lt. Gov. David Dewhurst condemned the performance, saying in a press release that "no one should have the right to use government funds or institutions to portray acts that are morally reprehensible to the vast majority of Americans." Although Tarleton's president, F. Dominic Dottavio, first defended the students' right to perform a play he considered "offensive, crude and irreverent," university officials changed course late Friday night, canceling the performance after receiving threatening calls and e-mail messages, according to The Star-Telegram.

A Fort Worth theater that had agreed to show a student-directed play with a gay Jesus character has withdrawn its offer.  The board of directors of Artes de la Rosa, which runs The Rose Marine Theater on North Main Street, decided Thursday against offering the venue for the production of Corpus Christi, just one day after saying it would. A March performance set for a directing class at Tarleton State University in Stephenville was abruptly canceled after the school received threatening emails.

It looks like Ross Douthat picked the wrong month to try to pretend that threat-induced censorship is a uniquely Islamic practice.  Corpus Christi is the same play that was scheduled and then canceled (and then re-scheduled) by the Manhattan Theater Club back in 1998 as a result of "anonymous telephone threats to burn down the theater, kill the staff, and 'exterminate' McNally."  Both back then and now, leading the protests (though not the threats) was the Catholic League, denouncing the play as "blasphemous hate speech."

I abhor the threats of violence coming from fanatical Muslims over the expression of ideas they find offensive, as well as the cowardly institutions which acquiesce to the accompanying demands for censorship.  I've vigorously condemned efforts to haul anti-Muslim polemicists before Canadian and European "human rights" (i.e., censorship) tribunals.  But the very idea that such conduct is remotely unique to Muslims is delusional, the by-product of Douthat's ongoing use of his New York Times column for his anti-Muslim crusade and sectarian religious promotion.

The various forms of religious-based, intimidation-driven censorship and taboo ideas in the U.S. -- what Douthat claims are non-existent except when it involves Muslims -- are too numerous to chronicle.  One has to be deeply ignorant, deeply dishonest or consumed with petulant self-victimization and anti-Muslim bigotry to pretend they don't exist.  I opt (primarily) for the latter explanation in Douthat's case.

As Balloon-Juice's DougJ notes, everyone from Phil Donahue and Ashliegh Banfield to Bill Maher and Sinead O'Connor can tell you about that first-hand.  As can the cable television news reporters who were banned by their corporate executives from running stories that reflected negatively on Bush and the war.  When he was Mayor of New York, Rudy Giuliani was fixated on using the power of his office to censor art that offended his Catholic sensibilities.  The Bush administration banned mainstream Muslim scholars even from entering the U.S. to teach.  The Dixie Chicks were deluged with death threats for daring to criticize the Leader, forcing them to apologize out of fear for their lives.  Campaigns to deny tenure to academicians, or appointments to politicial officials, who deviate from Israel orthodoxy are common and effective.  Responding to religious outrage, a Congressional investigation was formally launched and huge fines issued all because Janet Jackson's breast was displayed for a couple of seconds on television.

All that's to say nothing of the endless examples of religious-motivated violence by Christian and Jewish extremists designed to intimidate and suppress ideas offensive to their religious dogma (I'm also pretty sure the people doing this and this are not Muslim).  And, contrary to Douthat's misleading suggestion, hate speech laws have been used for censorious purposes far beyond punishing speech offensive to Muslims -- including, for instance, by Christian groups invoking such laws to demand the banning of plays they dislike.

It's nice that The New York Times hired a columnist devoted to defending his Church and promoting his religious sectarian conflicts without any response from the target of his bitter tribalistic encyclicals.  Can one even conceive of having a Muslim NYT columnist who routinely disparages and rails against Christians and Jews this way?  To ask the question is to answer it, and by itself gives the lie to Douthat's typically right-wing need to portray his own majoritarian group as the profoundly oppressed victim at the hands of the small, marginalized, persecuted group which actually has no power (it's so unfair how Muslims always get their way in the U.S.).  But whatever else is true, there ought to be a minimum standard of factual accuracy required for these columns.  The notion that censorship is exercised only on behalf of Muslims falls far short of that standard.

UPDATE:   A few points based on the discussion in the comment section:

(1) Several people are insisting that the problem of violence and threats by Muslims is far greater than, and thus not comparable to, those posed by Christians and Jews.  This is just the same form of triabalistic, my-side-is-always-better blindness afflicting Douthat.  Who could possibly look at the U.S. and conclude that brutal, inhumane, politically-motivated, designed-to-intimidate violence is a particular problem among Muslims, or that Muslims receive special, unfairly favorable treatment as a result of their intimidation?  Do you mean except for the tens of thousands of Muslims whom the U.S. has imprisoned without charges for years, and the hundreds of thousands our wars and invasions and bombings have killed this decade alone, and the ones from around the world subjected to racial and ethnic profiling, and the ones we've tortured and shot up at checkpoints and are targeting for state-sponsored assassination?

(2) There's no question that violence or threatened violence by Islamic radicals against authors, cartoonists and the like is a serious problem.  But (a) simply click on the links above -- or talk to workers in abortion clinics about the climate in which they work -- and try to justify how you can, with a straight face, claim it's not very pervasive among extremists and fanatics generally, and (b) avoid exaggerating the problem.  The group that threatened the South Park creators is a tiny, fringe group founded by a former right-wing Jewish-American settler in the West Bank who converted to Islam and spends most of his time harrassing American Muslims (the former "James Cohen"; h/t Archtype); they're about as representative of Muslims generally as Fred Phelps and these people are representative of Christians.  Moreover, numerous blogs displayed the Mohammed cartoons and plan to do so again; the notion that the Western World is cowering in abject fear from Muslim intimidation is absurdly overblown.

(3) Sarah Palin recently defended the Rev. Franklin Graham's statement that Islam is "a very evil and wicked religion."  That barely caused a ripple of controversy.  Imagine if a leading political figure had said anything remotely similar about Christianity or Judaism.  The claim that Muslims receive some sort of special protection or sensitivity is the opposite of reality.

(4) Ross Douthat previously cited with approval Jonah Goldberg's explicit advocacy of right-wing censorship (h/t sysprog).  When Douthat starts speaking out against censorship of ideas he hates, rather than when it comes from the religions he dislikes, he'll have credibility as what he pretends today to be:  a crusader for free expression.  Until then, it's clear that he's interested in little else other than wrapping himself in the banner of free expression as a means of advancing his sectarian conflicts.