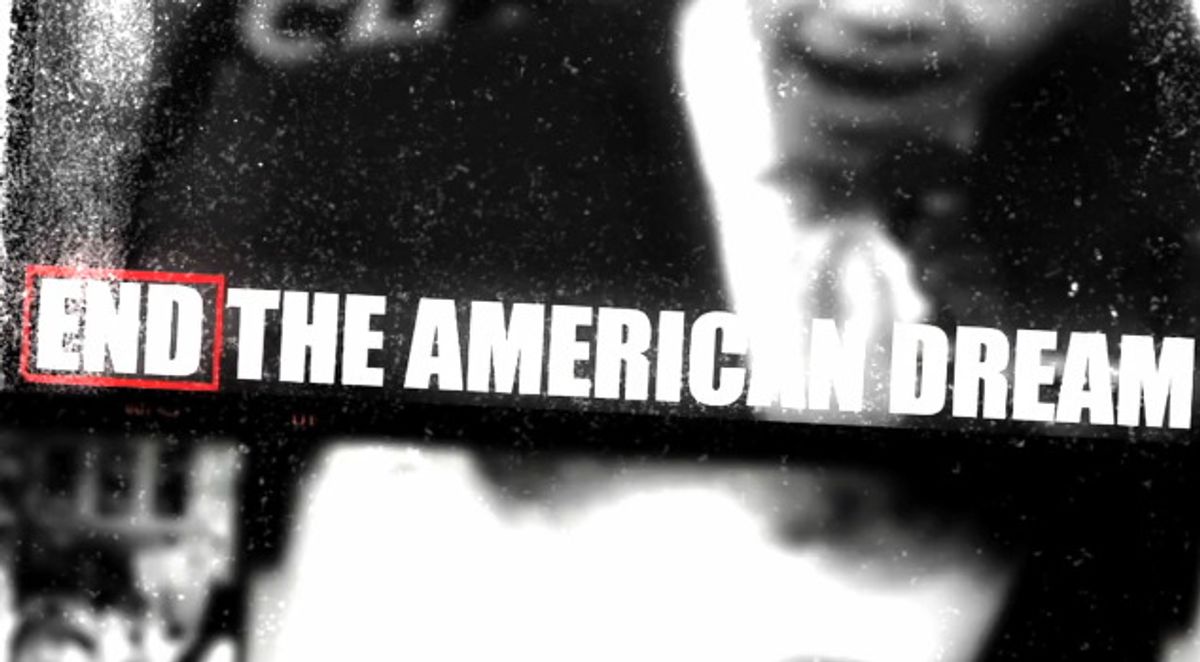 Some day, historians will look back and mark it as the peak of postmodern irony when the Republican Party claimed a near-monopoly over revolutionary rhetoric in American politics. It's a weird time. Sure, it started out on the bizarro fringes where Glenn Beck and Ron Paul dominate. But bit by bit, radical fervor has seeped into the staid institutions of the GOP itself.

The latest is a campaign site, launched by the Republican Governors' Association, called Remember November. The centerpiece is a video portraying the rise of Barack Obama as a kind of "it can happen here" narrative. I'll say this for them -- these have got the best production values I've ever seen in a political ad.

The thing starts out with that Abe Lincoln quote about fooling all of the people all of the time, set to ominous strings. There's some cutting back and forth between then-candidate Barack Obama declaring, "Yes we can," and various ominous things that he's supposedly done:

There's a quick tour of scary black guys -- in reality, irrelevant, powerless figures -- saying easily misread things: Rep. Alcee Hastings, D-Fla. avers, "There ain’t no rules around here. We make 'em up as we go along." Rev. Al Sharpton asserts, "The American public overwhelmingly voted for socialism when they elected President Obama." That's not entirely fair: noted white person House Speaker Nancy Pelosi is in there too, and naturally, Fidel Castro shows up, calling the passage of healthcare reform "a miracle."

I could go on like this, but I'll spare you. Suffice it to say that, not only is every single particular of the video extraordinarily misleading in one way or another, the whole thing is so overwrought that you keep wondering when we'll cut away to Glenn Beck sobbing while he blueprints out a heavily fortified bunker on his chalkboard.

So far, the RGA has caught flak because of the accusation that the video, with its call to "Remember November" is purposefully evoking historical British villain Guy Fawkes, and urging a violent uprising. It's worth backing up here and tracing the circuitous path by which we ended up talking about a 17th-century British terrorist in American politics.

It was Fawkes, of course, who attempted to destroy the British Parliament in an event now known as the Gunpowder Plot. He was caught, tortured and executed, and is now burned in effigy in the United Kingdom annually on Guy Fawkes Day, on November 5. British schoolchildren learn about the holiday through this rhyme:

The Fifth of November

The Gunpowder Treason and Plot.

I see no reason why Gunpowder Treason

Should ever be forgot.

Americans, of course, have discovered this story mainly from the regrettable 2005 Wachowski brothers movie, "V for Vendetta," in which a mysterious revolutionary hero brings down a future totalitarian government by reprising the Gunpowder Plot. And this was how Guy Fawkes -- really, pretty irrelevant even in England at this point -- infiltrated our political life.

"V for Vendetta" was based on a graphic novel by Alan Moore, who also wrote the graphic novels  "The Watchmen" and "The League of Extraordinary Gentlemen," both adapted into movies. Moore himself apparently meant the original version of "V" as an allegorical attack on Margaret Thatcher, and the on-screen rendition took some fairly ham-handed shots at the Bush administration.

Nevertheless, the perverse symbolism of Guy Fawkes the revolutionary hero was appropriated by the nerdy guys who formed the base of the Ron Paul presidential campaign. It's pretty clear why. The hero of the movie is a pariah intellectual who, once he dons his mask and cloak, brings down a dictator with some well-placed throwing knives and witty, rhyming comments. The stultified masses won't throw off their chains on their own, but by God, he'll do it for them if he has to. Along the way, Natalie Portman falls in love with him despite his disfigurements and the weird sequence in which he keeps her captive in a dungeon. "V" is wish fulfillment and comfort food for a certain kind of IT-type guy, just like "Twilight" is for tween girls. How do you think Ron Paul, a senior citizen with 19th-century political views, ended up as the tech-savviest candidate the GOP has ever had?

So on November 5, 2007, the Paul campaign had its famous "moneybomb," and raised a huge pile of campaign cash by explicitly trading on Guy Fawkes Day. This didn’t get as much criticism at the time as it should have: to recap, Fawkes, a loyalist of the Spanish Catholic crown, was trying to blow up Parliament -- the seat of then-nascent Western democracy -- in revenge for its persecution of Catholics. The symbolism is really all nonsense, but of course, the Paul guys didn't really have Fawkes in mind -- they were thinking of "V," and imagining themselves as epic action heroes.

The Paul campaign, in retrospect, was a clear precursor to the Tea Parties. It shared the hyperbolic revolutionary language, and likewise insisted on the idea that basic features of modern American democracy are, in fact, affronts to freedom and the Constitution. Also like the Tea Parties, Paul's movement turned out to have a deeply nasty underside of racism and conspiracy-theorizing.

This takes us back to the RGA's video. It's not really obvious that it is an attempt to evoke Fawkes, and "V for Vendetta." (Although check out the suggestive red letter "V" in the website's slogan, "Remember November.") What is apparent is that it's equally incoherent and indulgent of supporters' fantasies. Regardless of what the RGA is purposefully referring to or not, the video is an attempt to import the whacked-out radicalism of the Paul campaign, and its successors in the Tea Party, into the GOP’s mainstream, in service of a thoroughly banal and conventional goal: picking up vulnerable governorships in a midterm election.

But this is an area where the GOP just can’t have it both ways. We're living in a dystopian action movie, or we aren't. Option one is that America has devolved into some kind of Castro-Hastings-Obama-Sharpton tyranny. Option two is that we're living in a regular, functioning democracy, the leaders of which we can vote out if we so choose. To echo fringe theories about how we've been robbed of our liberties and democratic representation, and, in the same breath, ask for votes in November, requires a stunning degree of dishonesty. And really, Guy Fawkes aside, that's bad enough.