Eliot Spitzer on Goldman: Where are the prosecutors? 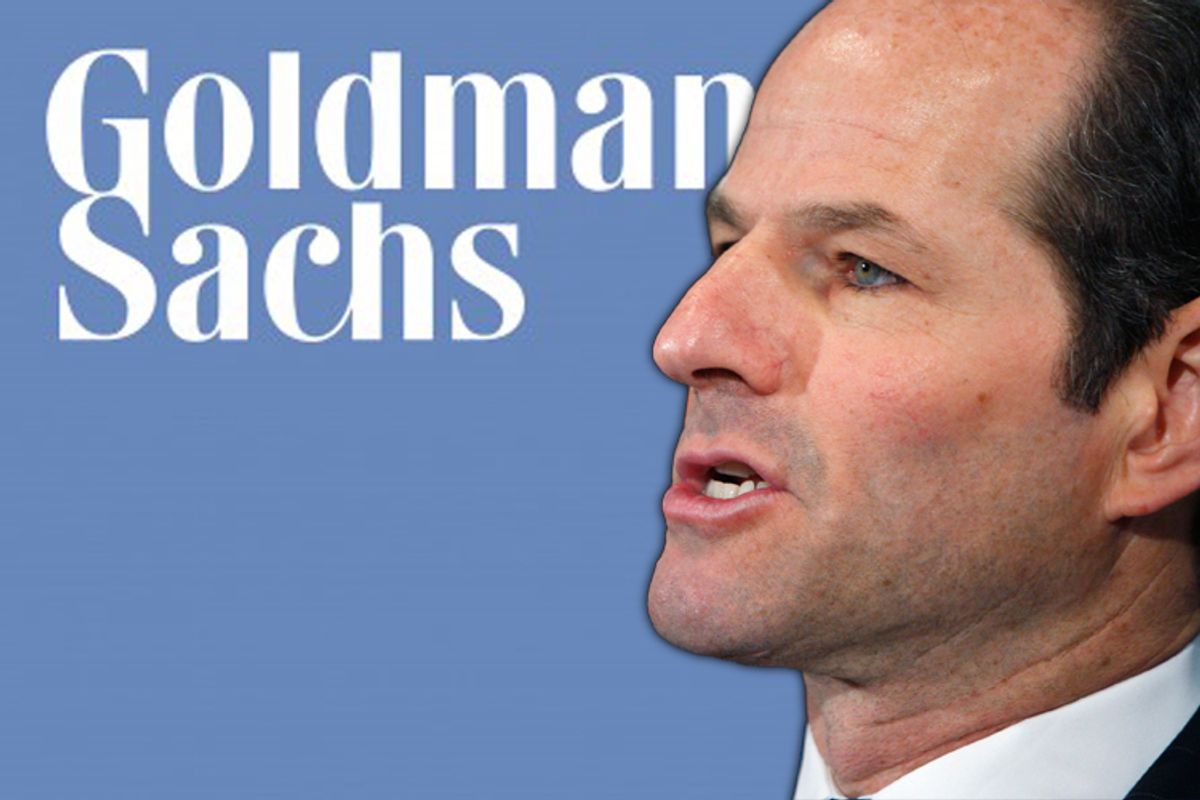 If Eliot Spitzer is truly on the road to rebirth as a politician, the single issue that he still owns is financial wrongdoing. Eradicating the scams he once prosecuted as New York attorney general, before such chicanery brought down the national (and global) economy, is not only popular but essential. While Spitzer makes no excuses for himself, his advocates have suggested that the former governor’s powerful Wall Street enemies gave a hard push to the prostitution scandal that forced his resignation.

Whether or not Spitzer believes there was a conspiracy against him, he shows no signs of backing down from his old adversaries. Today on New Deal 2.0, the news and opinion website of the Franklin and Eleanor Roosevelt Institute, he and Bill Black, the economist and scholar who is among the nation’s leading experts on financial fraud, launch a broadside at Goldman Sachs and former Treasury Secretary Hank Paulson, among others, and more or less insist that the public interest demands indictments:

For those who have spent years investigating fraud, it was no surprise to hear that Goldman Sachs, the (self-described) jewel of Wall Street, is the latest firm to emerge from the financial crisis with tarnished reputation. According to a lawsuit brought by the Securities and Exchange Commission, Goldman misrepresented to its customers the quality of the toxic assets underlying a complex financial derivative known as a "synthetic collateralized debt obligation (CDO)."

As you may now have heard, the story involves a pair of Paulsons. As CEO of Goldman, Hank Paulson oversaw the buying of large amounts of CDOs backed by largely fraudulent "liar’s loans." When he became U.S. Treasury Secretary, he went on to launch a successful war against securities and banking regulation. Hank Paulson’s successors at Goldman saw the writing on the wall and began to "short" CDOs. They realized that they had an unusual, brief window of opportunity to unload their losers on their customers. Being the very model of a modern investment banking firm, they thought that blowing up their customers would be fine sport ...

John Paulson (unrelated), who controls a large hedge fund, also wanted to short CDOs and he, too, recognized that there was a narrow window for doing so. The reason there was a profit opportunity was that the "market" for toxic mortgages only appeared to be a functioning market. It was, in reality, a massive bubble in which ratings and "market" prices were grotesquely inflated. The inflated prices were continuing only because the huge players knew that the prices and races were fictional and were covering it up through the financial equivalent of "don’t ask; don’t tell." According to the SEC complaint:

In January 2007, a Paulson employee explained the company’s view, saying that "rating agencies, CDO managers and underwriters have all the incentives to keep the game going, while 'real money' investors have neither the analytical tools nor the institutional framework to take action."

Both Spitzer and Black air their views regularly on this excellent site (where I should disclose that I have occasionally posted too). But it is worth noting that New Deal 2.0 also features an alternative view of the SEC action against Goldman today by Bowman Cutter, a former Warburg Pincus managing partner, who says that although he doesn’t believe the giant bank committed a crime, the Paulson deal reveals why, in the absence of real financial reform, the instinctual greed of its partners may devour us all (again).