Nebraska Sen. Bill Nelson votes with the Republicans, and the Democrats fail to get enough votes to begin debate 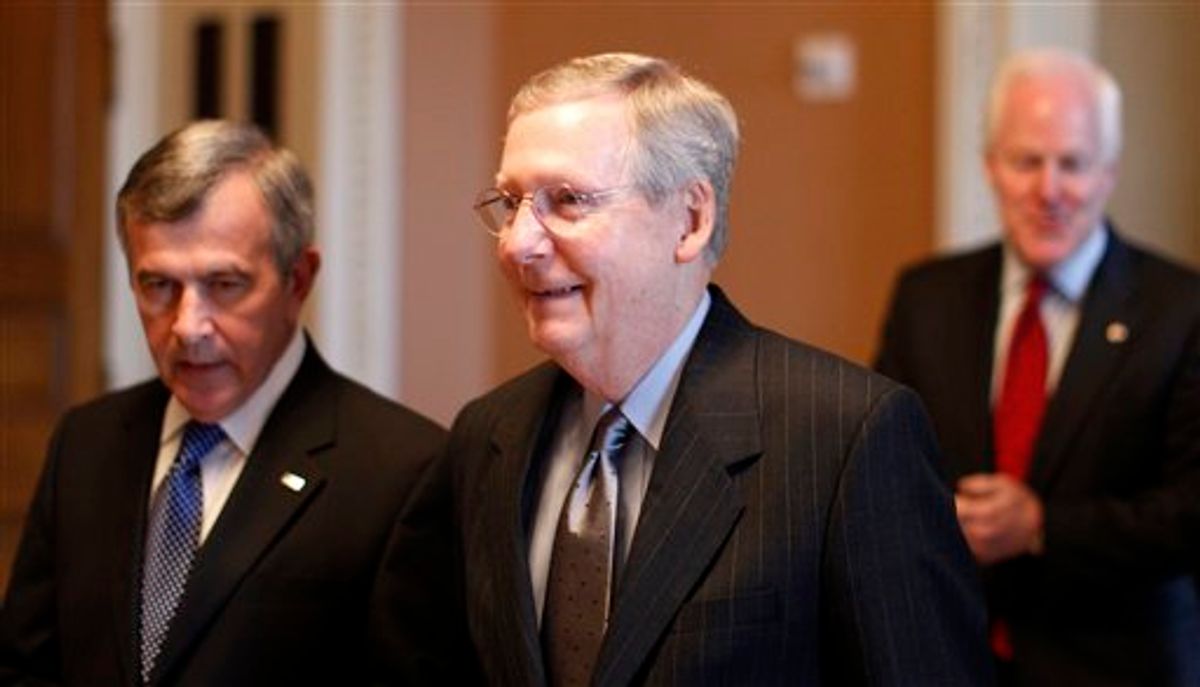 Senate Republicans have blocked Democrats' efforts to begin debate on overhauling the nation's financial regulatory system. The vote was the first Senate showdown on the sweeping legislation.

Democrats failed to get the 60 votes Monday needed to begin debate. One Democrat, Sen. Ben Nelson of Nebraska, voted with the Republicans to delay the start of debate. Republicans said they hope to secure a bipartisan compromise on the legislation, which aims to prevent a recurrence of the 2008 financial crisis. Democrats indicated they did not intend to cede much ground and vowed to test the Republican unity with another vote this week.

The Democratic leader, Sen. Harry Reid, switched his vote to "no," in a maneuver that allows him to call for a new vote.

WASHINGTON (AP) -- Seizing on Americans' anger at Wall Street, Democrats are growing increasingly confident they'll be able to break through Republican opposition and approve the most sweeping new controls on financial institutions since the Great Depression.

The Democrats needed 60 votes Monday to proceed on the regulatory overhaul, and GOP leaders predicted Republicans would succeed in a blocking effort. But that was just part of a legislative ballet keeping bipartisan talks alive.

Democrats believe that public pressure and the scent of a Wall Street scandal have given them the upper hand. Republicans themselves have taken up the Democrats Wall Street-bashing rhetoric and have voiced hope that a bill will ultimately pass. In that light, the path to final approval seems clearer than it ever did during the contentious debate over health care.

The financial overhaul bill is a priority of President Barack Obama and, after health care, its passage would build on his legislative successes -- an important political consideration in an election year. The House has already passed its version of new bank regulations.

Less than an hour before the scheduled vote, the White House issued its official endorsement of the bill, saying Obama would oppose adding any loopholes.

Both the House and Senate bills, aimed at heading off any recurrence of the near collapse of the financial system in 2008, would create a mechanism for liquidating large firms that get into trouble, set up a council to detect systemwide financial threats and establish a consumer protection agency to police lending. The legislation also would require investment derivatives, blamed for helping precipitate the near-meltdown, to be traded in open exchanges.

Senate Republicans have been solidly opposed to the legislation so far, but Democrats are determined to force them to block the bill time and again until their unity cracks.

"I don't think it's a tenable political position for the Republicans to be in," White House spokesman Robert Gibbs said.

"As far as I can tell, the only thing Republicans stand for is standing together," he said.

Richard Shelby, the top Republican on the Banking Committee, said Monday before the vote, "Most Republicans want a bill, but they want a substantive bill."

The Alabama senator has been negotiating with committee chairman Chris Dodd, D-Conn.

Shelby aides have been writing an alternative to Dodd's legislation in the event negotiations fail.

Shelby, emerging from a meeting with Dodd, said they planned to meet again, with their respective aides, to hammer out some areas of agreement.

Polls show the public increasingly eager to slap restrictions on financial institutions. Moreover, a lawsuit by the Securities and Exchange Commission accusing Goldman Sachs of fraud has gotten attention at this critical time.

To drive that point home, a Senate investigative subcommittee plans a hearing Tuesday on the role of investment banks in the financial crisis. Scheduled witnesses include Goldman chairman and chief executive Lloyd Blankfein and Fabrice Tourre, the Goldman Sachs trader at the center of the SEC charges.

For example, Senate Democrats on Monday were putting the finishing touches on their version of derivatives regulations that already have the support of at least two Republicans, Charles Grassley of Iowa and Olympia Snowe of Maine. Derivatives are complex securities blamed for helping precipitate the 2008 Wall Street crisis.

The derivatives restrictions, in some cases tougher than Dodd had initially proposed, would incorporate provisions approved by the Senate Agriculture Committee. Among them is a limitation strongly opposed by the largest banks that would force them to spin off their derivatives operations into separate subsidiaries, potentially costing them billions of dollars in business.

Administration officials have expressed qualms in the past about the sweep of that provision. But the White House statement Monday commended the Agriculture Committee for its work. Sen. Judd Gregg, R-N.H., who had worked on derivatives provisions, called the spinoff idea unnecessarily punitive and disruptive to the banking system.

Senate Republican Leader Mitch McConnell sought to rally his senators, arguing that a vote to delay debate was not a vote against regulation but for a bipartisan bill.

"All of us want to deliver a reform that will tighten the screws on Wall Street," McConnell said. "But we're not going to be rushed on another massive bill based on the assurances of our friends on the other side."