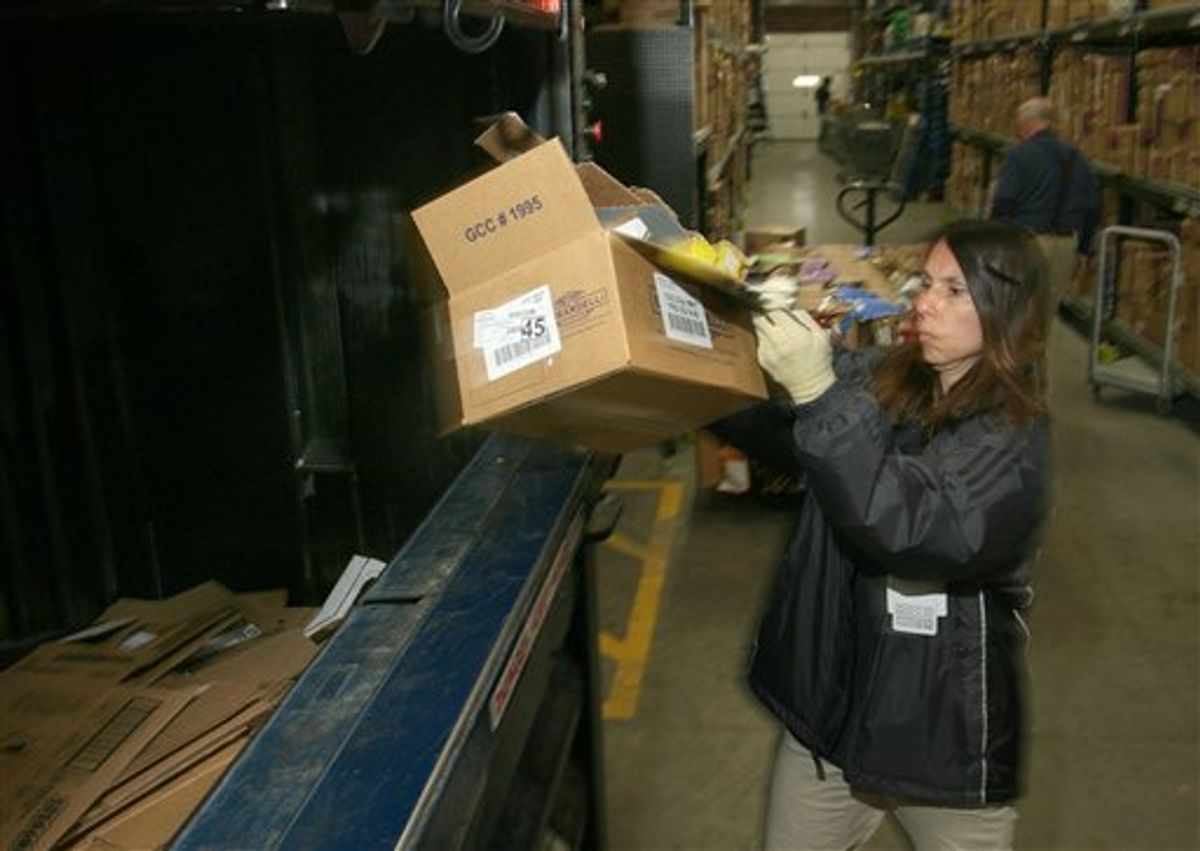 In this April 4, 2010 photo, Wal-Mart worker Julie Buczek throws used packaging boxes into a compressor for recycling at a Cincinnati area Walmart. Retailer Wal-Mart Stores Inc. is urging its suppliers to reduce 20 million metric tons of greenhouse gas emissions by the end of 2015, on top of its own moves to build more energy-efficient stores, using more alternative fuels for its truck fleet, and reduce packaging.(AP Photo/Tom Uhlman) (AP)
--

A sharply divided federal appeals court on Monday exposed Wal-Mart Stores Inc. to billions of dollars in legal damages when it ruled a massive class action lawsuit alleging gender discrimination over pay for female workers can go to trial.

In its 6-5 ruling, the 9th Circuit U.S. Court of Appeals said the world's largest private employer will have to face charges that it pays women less than men for the same jobs and that female employees receive fewer promotions and have to wait longer for those promotions than male counterparts.

The retailer, based in Bentonville, Ark., has fiercely fought the lawsuit since it was first filed by six women in federal court in San Francisco in 2001, losing two previous rulings in the trial court and again in the appeals court in 2007.

Wal-Mart successfully convinced the appeals court to revisit its 2007 ruling made by a three-judge panel with a larger 11-judge panel, arguing that women who allege discrimination should file individual lawsuits. The retailer argued that the number of litigants that the lawsuit purports to represent is too big to defend.

"Although the size of this class action is large, mere size does not render a case unmanageable," Judge Michael Daly Hawkins wrote for the majority court, which didn't address the merits of the lawsuit, leaving that for the trial court.

Judge Sandra Ikuta wrote a blistering dissent, joined by four of her colleagues.

"No court has ever certified a class like this one, until now. And with good reason," Ikuta wrote. "In this case, six women who have worked in thirteen of Wal-Marts 3,400 stores seek to represent every woman who has worked in those stores over the course of the last decade -- a class estimated in 2001 to include more than 1.5 million women."

A Wal-Mart representative said the retailer was preparing a statement.