The Battle of Kandahar is billed as "make-or-break," just like the Battle of Marjah was a mere two months ago 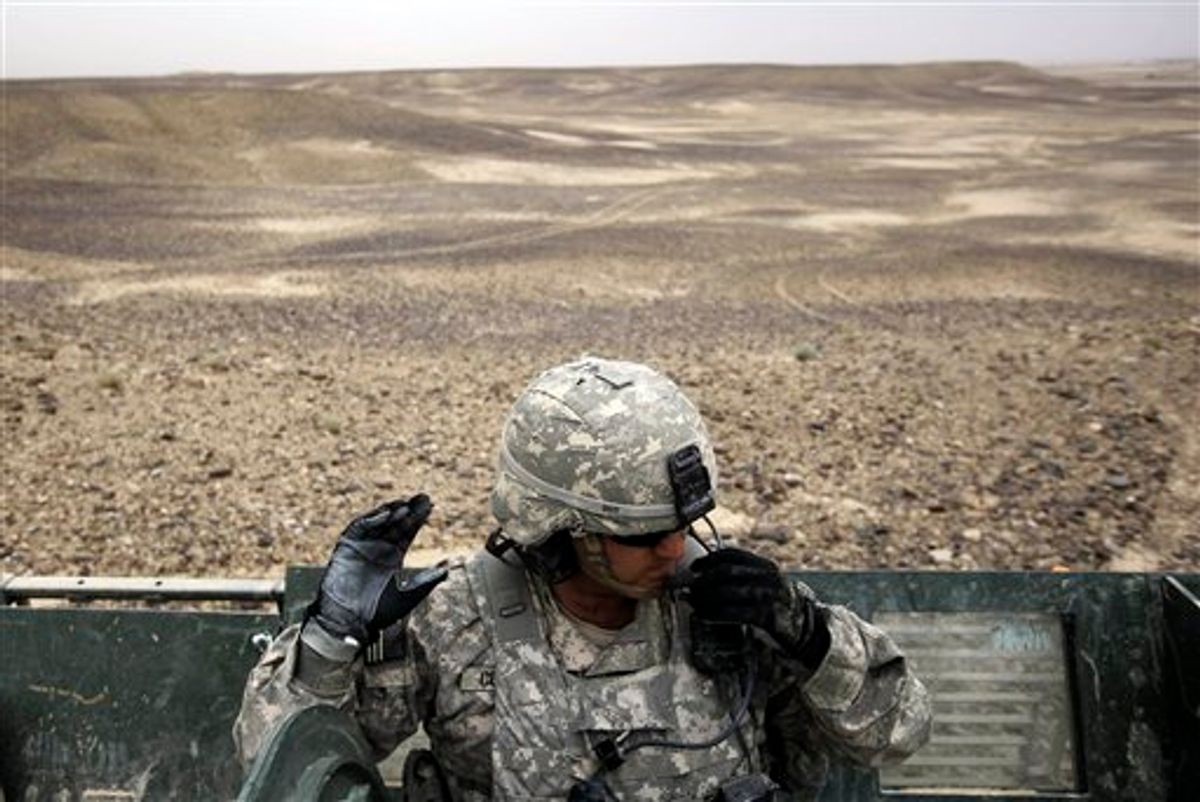 In this April 26, 2010, photo, U.S. Army Lt. David Cummings, of Raleigh, N.C., talks on the radio with soldiers from his platoon while out patrolling areas off of Highway 1 with A Troop, 2nd Battalion, 1st Infantry Regiment, 5th Stryker Brigade in the Kandahar province of Afghanistan. The American-led effort to wrest control of southern Afghanistan is off to a slow start and the political clock is ticking as U.S. troops head into what could be the bloodiest fight yet in the eight-year war. (AP Photo/Julie Jacobson) (AP)
--

The New York Times yesterday excitedly declared that the imminent Battle of Kandahar "has become the make-or-break offensive of the eight-and-half-year [Afghanistan] war" and is "the pivotal test of President Obama’s Afghanistan strategy."  As Atrios suggests, there never is any such thing as "make-or-break" because we never leave no matter how completely our war and occupation efforts fail.  That's what led to the countless Friedman Units of the Iraq War:  the endless proclamations that The Next Six Months will be Decisive, only to be repeated at the end of the six-month period of failure as though the prior one never happened.

Just consider what's being said now about how the Kandahar offensive is the "make-or-break" battle of the war and the "pivotal test" for Obama's war strategy by comparing it to what was said a mere two months ago about the now clearly failing assault on Marjah:

Allied troops launched a major offensive into Afghanistan’s most violent province last night, in a key part of President Obama’s push to seize control of the Taleban’s last big stronghold. . . . If it fails, many analysts believe that the war will be lost.

The Independent declared on February 9, 2010, that General McChrystal wants the Marjah offensive to "be one of the most significant in the country since the fall of the Taliban in 2001" and, of Obama's war strategy, said that "Marjah looks like being its first major -- and possibly decisive -- test."  The BBC quoted a NATO official who proclaimed that Marjah "was 'probably the definitive operation' of the counter-insurgency strategy" and "this operation could potentially define the tipping point, the crucial momentum aspect in the counter-insurgency."  Time helpfully informed us that "U.S. officials believe it will mark a turning point in the war."

Now that that "make-or-break decisive test" has failed (or, at best, has produced very muddled outcomes), did the Government and media follow through and declare the war effort broken and the strategy a failure?  No; they just pretend it never happened and declare the next, latest, glorious Battle the real "make-or-break decisive test" -- until that one fails and the next one is portrayed that way, in an endless tidal wave of war propaganda intended to justify our staying for as long as we want, no matter how pointless and counter-productive it is.

Speaking of war propaganda, today is a very proud day for the U.S.:  the military commission ordered by Eric Holder begins for Omar Khadr, a Canadian-born, Afghanistan-residing detainee encaged at Guantanamo for seven years -- since he was 15 years old -- on "war crimes" and "terrorism" charges that he was involved in a firefight with American military forces who, revealingly enough, were using a former Soviet military base as their outpost.  Khadr was wounded in the battle, imprisoned at Bagram, then at Guantanamo, claims he was severely tortured into falsely confessing, and made worldwide news when a video of him weeping, begging for medical help, and crying for his mother during an interrogation was released.  Apparently, if the U.S. Army invades a foreign country, anyone who fights against that invading force -- including a 15-year-old boy -- is a "war criminal" and a "Terrorist," even the Worst of The Worst, which is, of course, all that we're currently holding at Guantanamo.  Now that's some robust propaganda.