Will British voters go with their guts?

Since voting for the Liberal Democrats isn't a "wasted vote" anymore, the British third party is expecting a surge 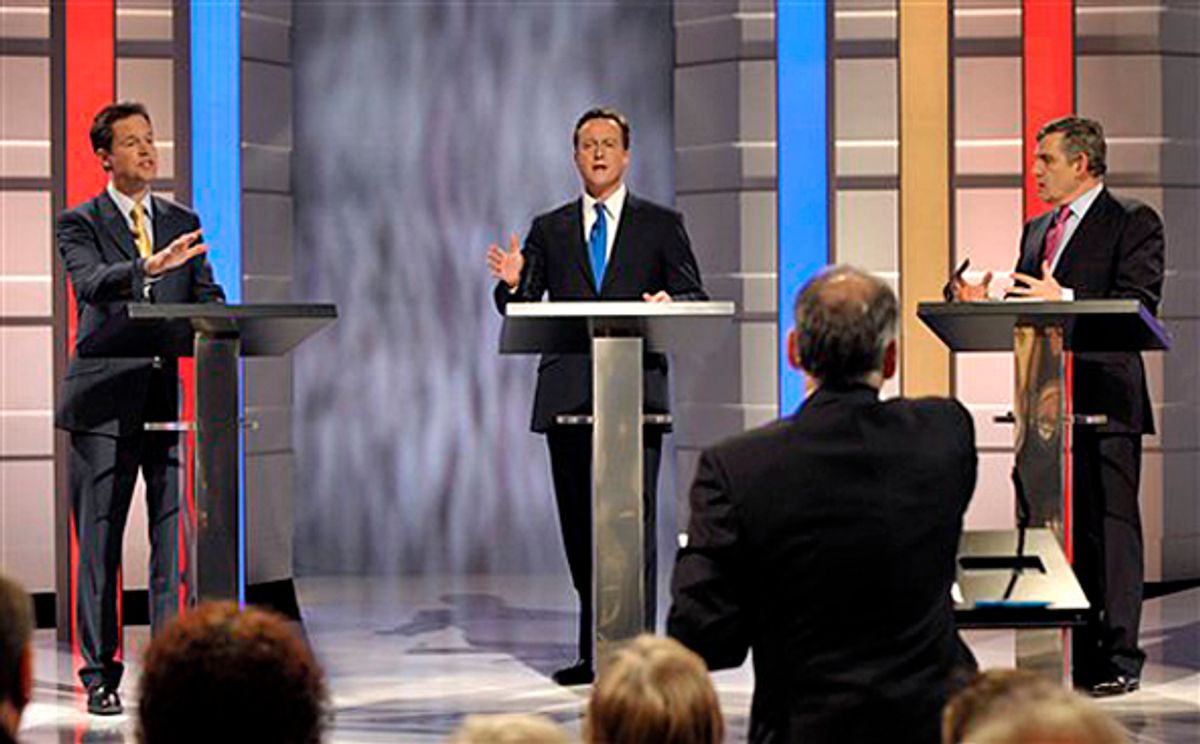 Britain's Labour party leader Gordon Brown, right, Nick Clegg of the Liberal Democrats, left, and Conservative leader David Cameron, center, during a first ever live televised political debate between party leaders broadcast to the nation, from TV studios in Manchester, England, Thursday April 15, 2010. Pollsters predict that about half of the British electorate, some 20 million people, plan to watch the televised debate between the leaders of the three main political parties Thursday, ahead of the British General Election on May 6, 2010.(AP Photo / Rob Evans) ** EDITORIAL USE ONLY - NOT TO BE RETAINED IN ARCHIVE AFTER MAY 14 2010 ** (Rob Evans)
--

When I teach strategic voting to my undergraduates, I define it as an instance where people rank candidates or parties in the order they would prefer to see them elected, and then subsequently choose not to vote for whomever they rank first. By contrast, a sincere voter votes for her first choice. There are a variety of reasons why voters might choose to vote strategically (e.g., they might want to send a message to a candidate running in a subsequent election, or they might want to moderate policy outcomes), but the most popular reason in the literature seems to be that voters do not want to waste their vote by voting for a candidate who has no chance of winning the election; this is also known as tactical voting.

In recent years, Britain has been characterized as a 2  1/2 party system: It has two viable parties that can win elections (Labour and Conservative), and then a third party that wins a non-trivial amount of seats but has not really been considered a legitimate contender to win an election (Lib-Dems). While strategic voting ultimately occurs at the district level, one would have to assume that in the past, the Lib-Dems have been disproportionately hurt by strategic voters: With Labour and the Conservatives assumed to have viable shots at winning elections, we would have to guess that more often it is potential Lib-Dem voters that abandon their party to choose between Labour and Conservative than the other way around.*

Which brings us to the 2010 elections. As I noted in a response to Henry’s previous post, one effect of the recent British debates and the explosion of Cleggmania could be that it frees up Lib-Dem supporters who have in the past voted strategically to actually vote sincerely in 2010. This would suggest some sort of underlying tipping model: As long as Lib-Dem support stays below a certain level, added popularity in the polls might still not transfer into that many additional votes if strategic voters defect on election day. However, once the party reaches the level of the big three (i. e., Lib-Dems are presumed to be just as viable an option as the other two parties), then there might be a rather dramatic increase in actual votes for Lib-Dems as the strategic voters come home.

My question for readers is the following: How could we know if this was actually occurring? Two options seem fruitful to me, but I am interested in other suggestions (especially from anyone who has surveys in the field!).

First, anyone with repeated surveys in the field could compare thermometer scores (0-100 rankings of how much you like a particular party) for the three parties with vote intention. The hypotheses would be that up until some "tipping point" there should be a significant gap between the proportion of respondents who rank the Lib-Dems highest on the thermometer scores and those intending to vote Lib-Dem. On the individual level, if we regress vote intention on ranking the Lib-Dems highest on thermometer rankings, we would expect to see the size of the coefficient on ranking the Lib-Dems highest increase after the tipping point. What’s great about the 2010 British elections is that we have a good guess at where this tipping point should be: in the days immediately after the first P.M. debate. Moreover, I think this type of analysis could work either with panel data or repeated new surveys, although with panel data we could of course track actual switchers.

A second strategy would be to compare the proportion ranking Lib-Dems highest on thermometer scores who go on to vote Lib-Dem in 2010 in post-election surveys (or immediate pre-election surveys) with previous elections. If the proportions are roughly constant, then we could conclude 2010 was no different, and -- provided there was a drop-off between the thermometer scores and the vote intention/choice -- the strategic voters stayed away. If the proportions increased, however, it would be evidence that strategic voters came home.

What are some drawbacks of this approach? The most serious seems to be that voters who are planning on voting strategically might need to rationalize that decision in their own heads by changing their thermometer rankings to reflect vote choice. Does anyone have any previous research suggesting whether or not this is the case?

Other thoughts? Ideas for how to proxy for preferred party other than vote intention or thermometer rankings? Anyone have surveys in the field attempting to test for strategic voting in this election?

*It is possible that in individual districts, pre-election polling could convince a possible conservative supporter that their particular race was going to come down to the Lib-Dem candidate and the Labour candidate, and therefore strategic voting in that instance could actually help the Lib-Dem. That being said, I would still maintain that if the national election was presumed to come down to Labour and Conservative, the Lib-Dems should be disproportionally disadvantaged by strategic voting. Although the more I think about this, the more this strikes me as an interesting question: Has anyone tested whether strategic voting at the district level is moderated by national implications of elections in parliamentary systems with single member districts?