How a great nation solves its problems: Harry Reid wants to keep Republicans up all night long 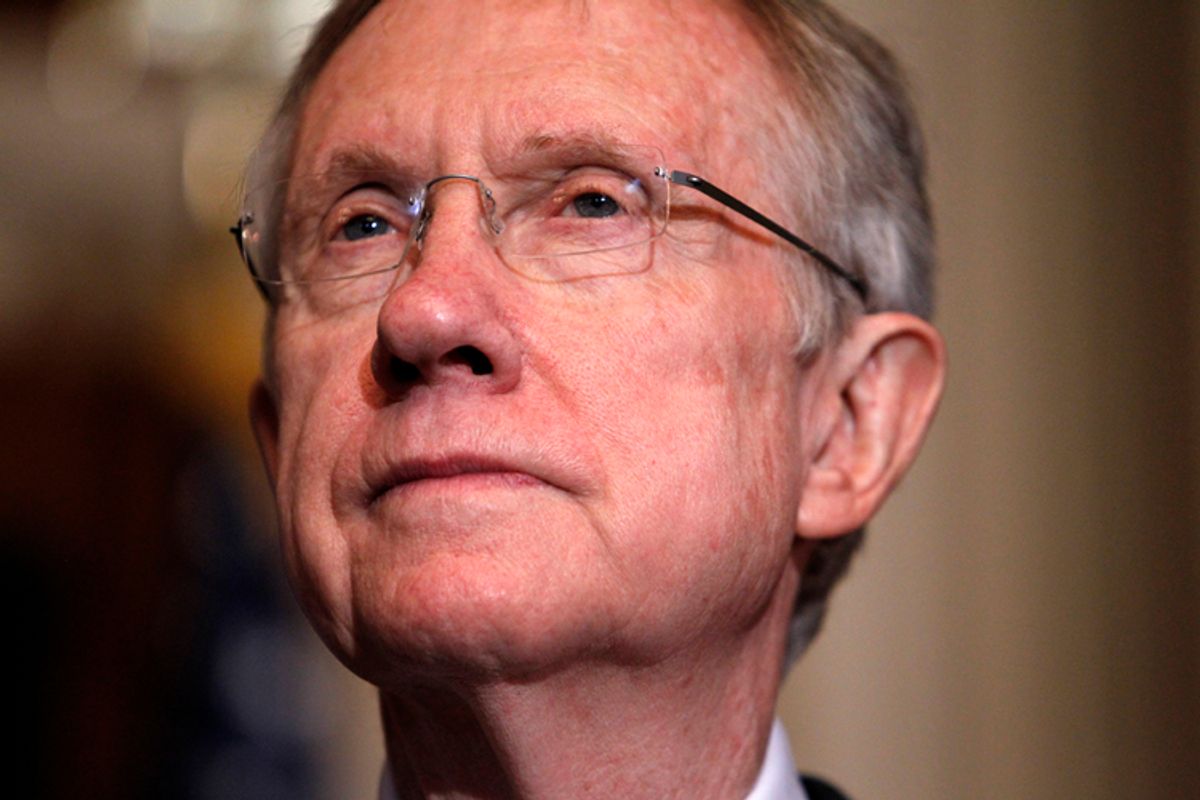 (BREAKING NEWS UPDATE: The Associated Press is reporting that Republicans will drop their opposition to allowing debate after receiving "assurances that Democrats will adjust his banking regulation bill to address concerns that it perpetuates bailouts." This means the post you are about to read is already obsolete.)

After all the procedural pain Republicans inflicted on Democrats during the health care reform legislative battle, Harry Reid must be enjoying the opportunity to twist his own knife slowly into the GOP. Every single day this week, the majority leader has forced a vote on whether or not to start debating the Dodd banking reform bill. So far, Republican senators have stood firm. But the very latest word, reported by Roll Call (via Taegan Goddard,) is that Democrats plan to force procedural votes into the wee hours of Thursday morning. If Republicans want to keep filibustering, they are going to have load up on coffee.

Plan is to stay all night asking consent of Republicans to let us debate Wall Street reform. I just don't get why we can't debate.

Why indeed? The Democrats are perfectly positioned to make political hay. It's one thing to vote against a bill that you don't like, but it's quite another to refuse to engage in the most basic legislative processes. If Republicans have amendments to the Dodd bill that they'd like to make, why not make their case to the general public and the rest of the Senate out in the open?

Could it be that the politics of Republican priorities -- for example, weakening consumer financial protection and derivatives regulation -- don't look so good in the light of day?

The Hill reports that moderate Republicans are grumbling about the delays, but we've been hearing their anonymously-voiced discontent for weeks now. So far, GOP party discipline has been impressive, even though everyone seems to agree that the bill will eventually make it to the floor. The question at issue hasn't changed: Will the GOP get the concessions it wants before debate begins, or will a handful of moderates, frustrated with being painted, day in and day out, as obstructionists, finally break ranks?

I'm not sure an all-nighter on Capitol Hill is going to achieve much of anything, however, outside of heightened acrimony. Who knows, the tactic might even stiffen the spine of wavering moderates who don't like being strong-armed. Certainly the likes of Jim DeMint or Tom Coburn or Jim Bunning, faced by the prospect of actually being forced to filibuster, aren't going to crack. They like being the Party of No.

But whatever happens, we're seeing a level of vigor from Democrats that has been in short supply in recent years. Harry Reid seems determined to keep ramping up the pressure -- something is bound to happen, soon.