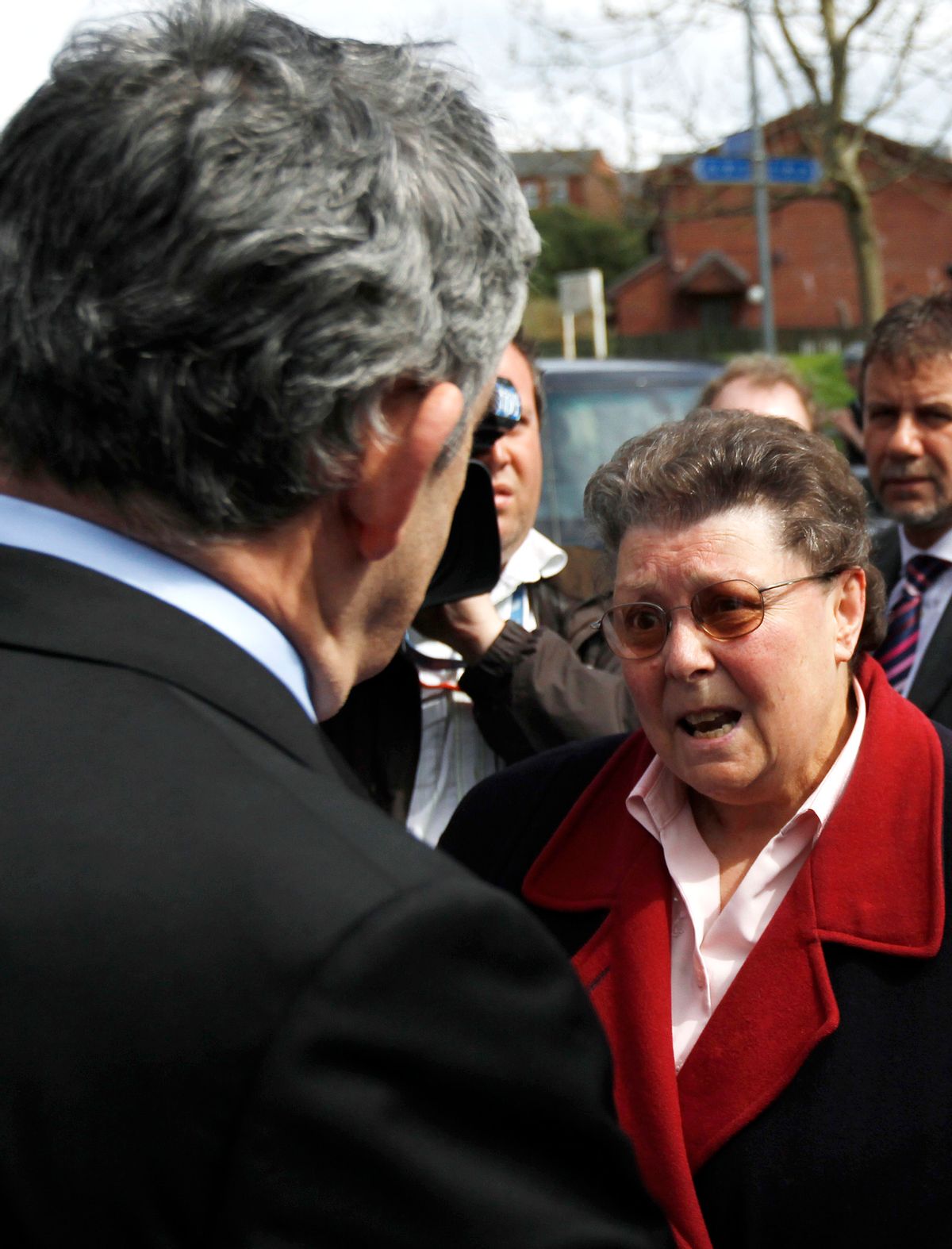 Britain's Prime Minister Gordon Brown speaks with resident Gillian Duffy (R) during a campaign stop in Rochdale, northwest England April 28, 2010. Brown was caught on tape describing Duffy as "bigoted" after she confronted him on the economy during a walkabout in Northern England on Wednesday. REUTERS/Suzanne Plunkett (BRITAIN - Tags: ELECTIONS POLITICS) (Reuters)
--

Did you know that The U.K. is having its own adorable election right now? Prime Minister and noted bully Gordon Brown is in a bit of hot water for calling an old lady a "bigoted woman." Into an open mic. Right after talking to her. And she is (or was!) a supporter.

The lady is named Gillian Duffy. She's a lifelong Labour voter. She was apparently heckling Brown as he gave an interview, and Brown's aides suggested that it would be very statesmanly of him to talk to her instead of ignoring her. Her primary complaint: there are too many Eastern Europeans in England!

Brown reasonably pointed out that there are lots of British people in Europe, and Europeans certainly aren't thrilled about that, and then they had a nice little talk and that was the end of it. Until Brown got into his car and a hilarious Armando Iannucci programme broke out.

PM: That was a disaster. Should never have put me with that woma ... whose idea was that?
Second voice: I don't know, I didn't see her.
PM: It's Sue, I think. It's just ridiculous. (Muffled sounds)
SV: What did she say?
PM: Ugh, everything - she's just a sort of bigoted woman, said she used to be Labour. It's just ridiculous

The best part of the video is not actually the PM calling her a bigot (while bullying an aide). The best part is that Brown is the least charismatic person on that entire island of uncharismatic sallow depressives. "Helping people, that's what we're about," he drones to the lady, lifelessly. As she leaves he belatedly remembers to ask this pensioner about her grandchildren, and he seems like he immediately regrets that decision once she turns back around to actually talk about them.

Brown's day continued to be a savage satirical mockumentary as he was then taped listening to the tape of him embarrassing himself:

In England, this sort of thing is called an "Uncle Major," which is Cockney rhyming slang for "a hilarious gaffe committed a week before the election by the guy polling in third place already."

Here's LibDem leader Nick Clegg—currently the most popular person in the UK solely because he is neither Gordon "Bigot-Bully" Brown nor an unctuous Tory—saying Brown was right to apologize, because it's rude to say mean things about old ladies in the privacy of your car when you forget you're wearing a live mic.

Thanks to Britain's first-past-the-post voting system, Brown can probably call every pensioner in Greater Manchester a bigot and still end up with, at the least, a Labour/LibDem coalition government.