Political journalists are angry at the Obama administration but unwilling to say so; isn't that a big problem? 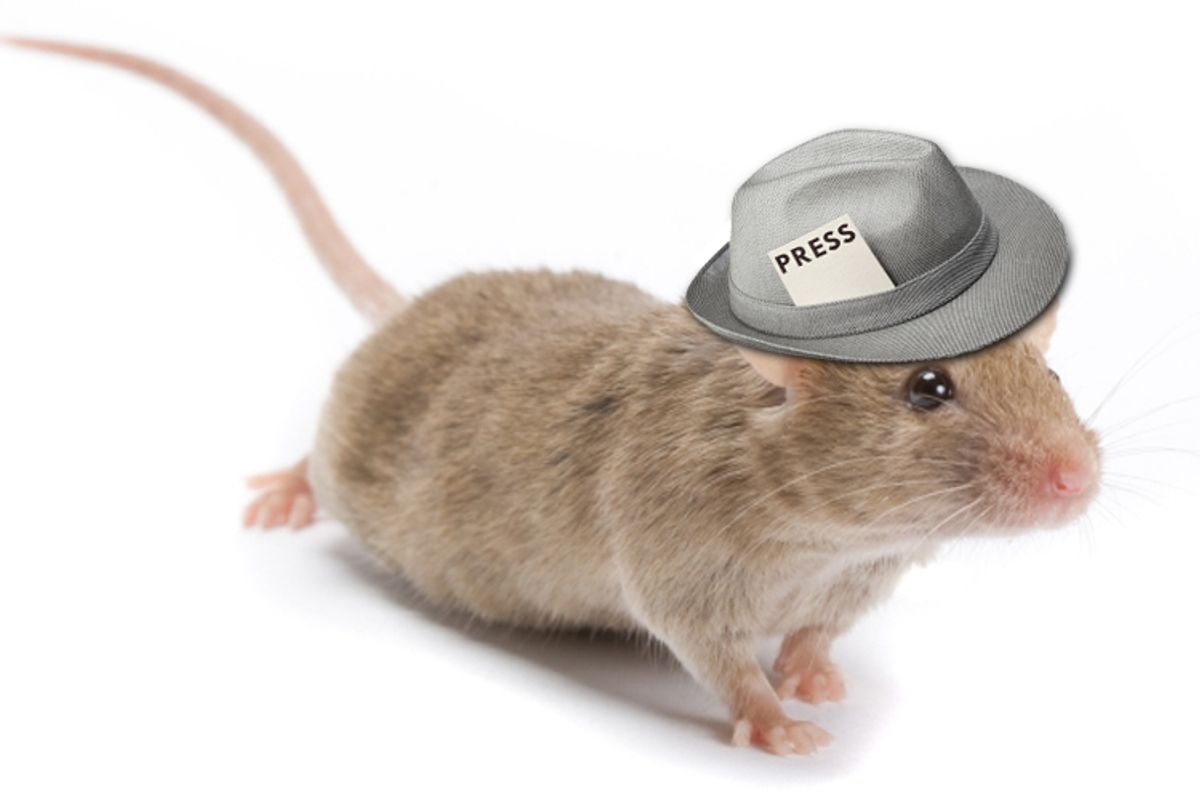 Politico's Josh Gerstein and Patrick Gavin have a long article describing the growing anger of the White House press corps towards the Obama White House.  Many of the grievances are petty, though some are serious and substantive (involving lack of transparency and media manipulation), but the passage that I found most revealing is this one:

Much of the criticism is off the record, both out of fear of retaliation and from worry about appearing whiny. But those views were voiced by a cross section of the television, newspaper and magazine journalists who cover the White House.

Just think about that for a minute.  National political reporters are furious over various White House practices involving transparency and information control, but are unwilling  to say so for attribution due to fear of "retaliation," instead insisting on hiding behind a wall of anonymity (which Politico, needless to say, happily provides).  Isn't that a rather serious problem:  that the White House press corps is afraid to criticize the President and the White House for fear of losing access and suffering other forms of retribution?  What does that say about their "journalism"?  It's the flip side of those White House reporters who need the good graces of Obama aides for their behind-the-scenes books and thus desperately do their bidding:  what kind of reporter covering the White House would possibly admit that they're afraid to say anything with their names attached that might anger the President and his aides?  How could you possibly be a minimally credible White House reporter if you have that fear?  Doesn't that unwillingness rather obviously render their reporting worthless?

The article notes that aside from punishing reporters who say things it dislikes, the White House rewards those reporters (with special "scoops" and other privileges) who subserviently promote its agenda, and specifically identifies White House "favorites" David Sanger of The New York Times (the Judy Miller of The Iran Threat) and Richard Wolffe (the single most sycophantic White House stenographer after Jonathan Alter).  It's nice that the White House's most loyal journalist-servants are petted on their head for their Good Behavior (it'd be sad to see that level of devotion go completely unrewarded).  I'm sure Alter and Ryan Lizza's Obama books will be accordingly suffuse with White House favors.  I can't recall reading any sentence quite as illustrative as this one from Politico stating (without any irony) that White House reporters insisted upon anonymity because they're afraid of angering the White House with their public statements.

For those in New York City, several groups, including the ACLU, are hosting a very interesting event this Thursday night entitled "Face to Face:  Confronting the Torturers."  Event information is here.

UPDATE:  Michael Calderone, who recently left Politico to join Yahoo News, had a very similar story a week or so ago detailing the growing animosity between the White House press corps and the Obama White House over issues of transparency and the like (animosity strangely absent during the full-scale information blackout of the Bush years).  Calderone's article also detailed how reporters who anger the White House are punished and the ones who please them are rewarded, and included this quote from Richard Wolffe:  "the White House has been very good to me."  They certainly have, Richard.  And you've been very good to them, too.  It's a very warm, loving, favor-providing, mutually beneficial relationship -- just like "reporters" are supposed to have with the political officials they cover.

The Obama team came to Washington promising transparency, but White House reporters say privately that the administration is not living up to that pledge.

If that complaint is actually true, isn't that something that reporters should be saying publicly, not "privately"?  Isn't saying such things publicly sort of what being a "journalist" means?