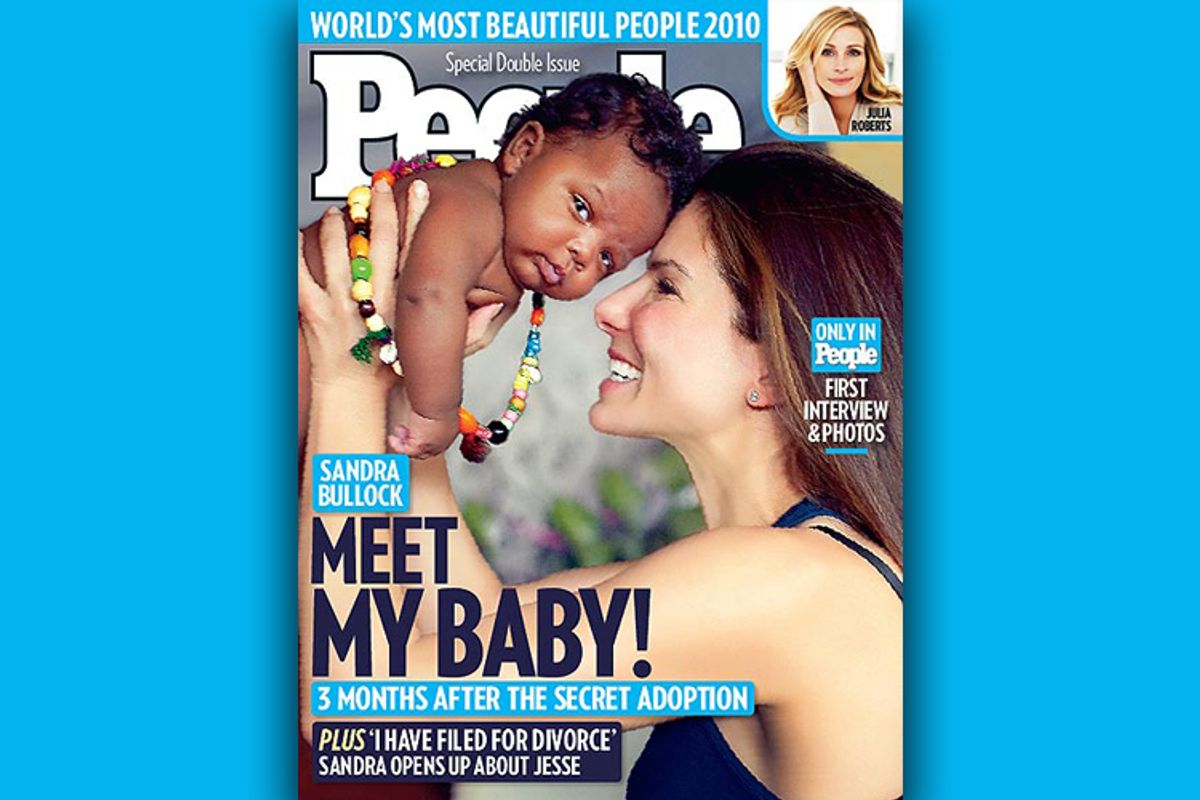 This is how you do it, ladies. No apologizing for your own "failing," saying (as Silda Spitzer did recently), "The wife is supposed to take care of the sex."  No stealthy, stand-by-your-man wall of silence. Just a few weeks after her personal life blew up with revelations her husband, Jesse James, was stepping out with a colorful array of tattoo models and exotic dancers, Sandra Bullock is on the cover of People, smiling, her ring finger blatantly unadorned, holding her brand-new adopted baby. So there.

In the story, Bullock confirms that she's filed for divorce from James and is the new mother of 3-and-a-half month-old Louis Bardo Bullock. She says she and James initiated the adoption process four years ago and brought the child, who was born in New Orleans, home together in January. Bullock is finalizing the adoption as a single parent.

In choosing to go public with the latest developments in her family life -- in the super softball arena of People -- Bullock is, of course, deflecting a modicum of the intense scrutiny she's been under in recent weeks. But she's also making a strong case for keeping calm and carrying on. And she's following in the footsteps of Angelina Jolie, whose marriage to Billy Bob Thornton crumbled soon after adopting her first child, Maddox.

Is there something about the stress of adoption that contributes to a marital decline? I can't help recalling Jennifer Garner's "Juno" character, Vanessa, who forges on as a single mother after her husband decides he's in over his head. The added twist of Bullock showing off her new African-American son while her soon-to-be ex has been dallying with a woman with a swastika tattoo and the words "white power" on her fridge adds a whole other set of questions to the story. For some, it may have disturbing echoes of Bullock's own Oscar-winning turn as Leigh Anne Tuohy in "The Blind Side" -- not to mention the satirical plotline of another recent film, "Bruno." But not everything -- even in show business -- has to be cynical. And it's hard as hell to argue with a loving mom and a child who needs a home finding each other.

A baby is no consolation prize for a failed relationship -- just ask any single mother. Bullock herself says of her marital situation that "I'm sad and I am scared." But in the same week Miss Congeniality is getting apologetic faxes from her husband's stripper mistress, it's mostly just nice to see Bullock looking radiant and joyful. Given Jesse James' apparent fondness for white supremacists, it's probably also for the best that he won't be little Louis' legal guardian.

For the rest of us, Bullock's decisive move is a refreshing reminder that a woman who's been humiliated by a cheating spouse -- whether she's the first lady of the Empire State or a beloved Hollywood star or your best friend -- doesn't have to slink off into self-loathing and shame. Bullock's million-dollar smile reminds us that even in its hardest, worst moments, life still goes on. And that happiness is always an option.