Signs of a Democratic upturn 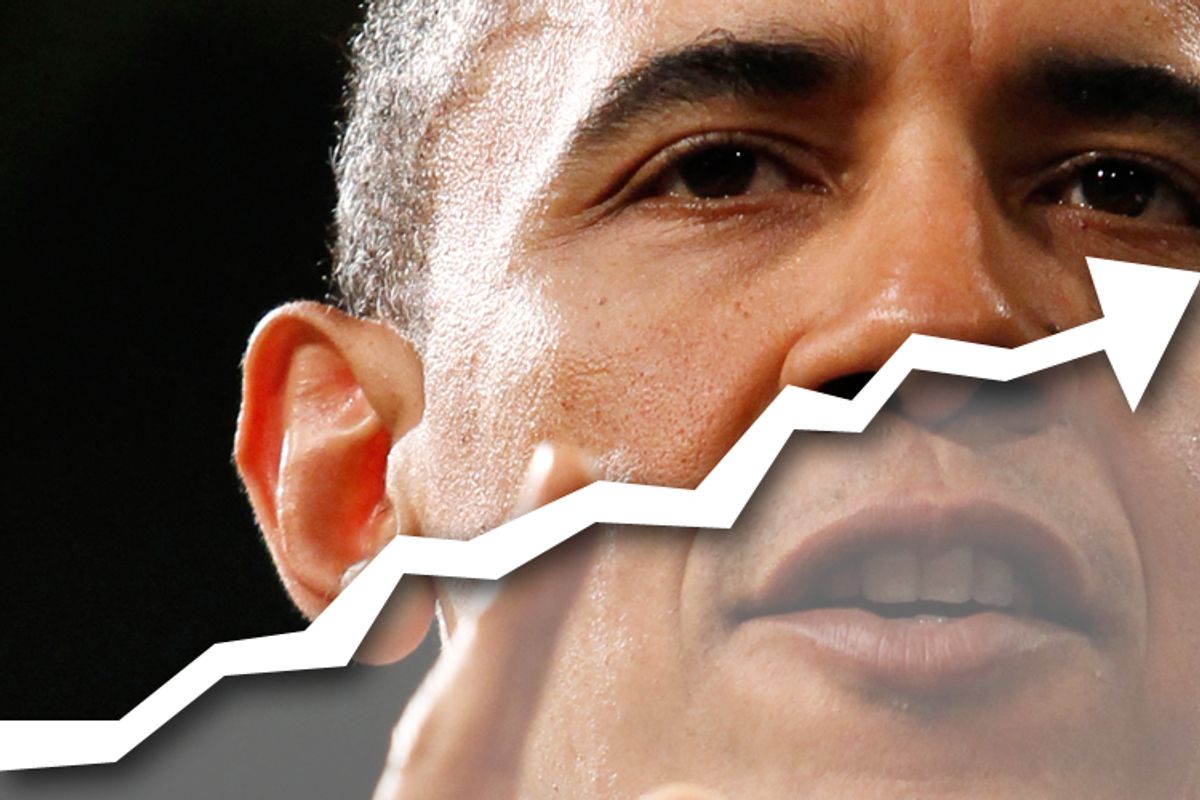 “Sour mood could cost Democrats,” warns the front-page headline on today’s Washington Post/ABC News poll, a phrase suggesting that angry voters -- less than a third of whom say they would vote for their own member of Congress -- will turn their ire on the majority. Of course, voter discontent with incumbents is by definition a bigger problem for the party that holds the most seats.

There isn’t much news in public hostility toward both parties or political incumbents. Those numbers have been skirting historic highs (or lows) for months. But anyone who examined the poll data hoping to find bad news for Democrats was likely to be disappointed, because the Post poll actually shows the first signs of an upward turn for President Obama and his party, visible in this graph. As the accompanying story notes:

The public trusts Democrats more than Republicans to handle the major problems facing the country by a double-digit margin, giving Democrats a bigger lead than they held two months ago, when Congress was engaged in the long endgame over divisive health-care legislation. A majority continues to see Obama as "just about right" ideologically, despite repeated GOP efforts to define the president as outside the mainstream.

Even though the country remains closely divided over White House policies on healthcare, banking reform and the economy, voters continue to distrust the Republicans. According to the actual numbers, general approval of the president’s performance has risen over the past two months from 51 percent to 54 percent in the Post poll, while disapproval has dropped from 46 to 44 percent. Approval of his handling of the economy has shifted from a net negative, with 45 percent approving and 53 percent disapproving in February, to a dead heat of 49 percent on both sides. He made similar gains in his handling of healthcare. On the budget deficit, however, his approval numbers are weak, with only 40 percent approving and 55 percent disapproving.

At the same time, voters say they trust Obama slightly more than the Republicans to deal with the deficit, by a margin of 45 to 41 percent. On healthcare, he is trusted by 49 percent while the Republicans are trusted by only 39 percent.

The problems that Republicans face in regaining public trust may have as much to do with bad memories as with current misbehavior. By wide margins, according to the Post poll, Americans blame George W. Bush for economic conditions and budget problems far more than his successor. But Bush isn’t running this year.

The most encouraging signs for Democrats in the Post poll are those that suggest independents may not be sold on voting Republican, especially because their approval of the president has gone up lately, and that the Democratic base may be emerging from its first-year malaise with renewed energy and morale. It is the withering of intensity on the left that has imperiled the Democrats. As Dan Balz observes, these numbers promise a chance to change the midterm dynamic, but only if the White House and the congressional leadership prove they mean to respond to public anger.

Passage of banking reform is likely to help. Among the issues tested in the Post poll, its popularity is exceptionally clear, with 63 percent affirming that they want “stricter federal regulations on the way Wall Street firms conduct their business” (even though most simultaneously insist that they want “smaller government”). Support for regulating derivative trading is much less clear, with 43 percent in favor and 41 percent opposed, possibly because respondents don’t understand what derivatives are. (The poll question only identifies them as “complex financial instruments.”)

But 53 percent support taxing big banks to create a fund that would be used to take over and break up any large financial institution “that is failing and threatens the broader economy,” with only 42 percent opposed. And 59 percent support stronger federal oversight of consumer loans such as credit cards and mortgages, with only 36 percent opposed. Which may mean that Democrats -- and the White House -- should revive the independent Consumer Finance Protection Agency that Republicans (and their Wall Street donors) hope they have killed. Standing up to fight for families against bankers cannot possibly hurt.