Cigarette warnings are bad for you 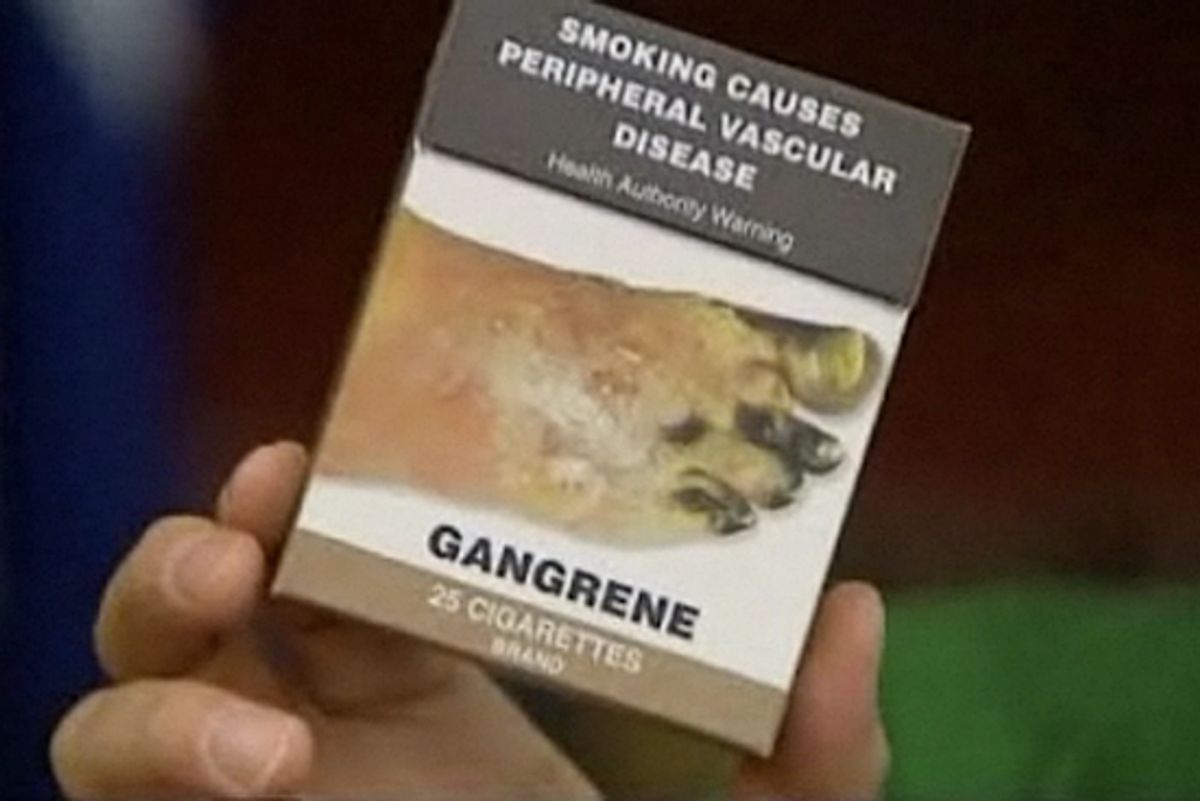 A package of cigarettes in Australia contain a graphic anti-smoking warning.
--

Thanks god for those filthy, disgusting smokers -- they make us feel so much better about ourselves, don't they? In yet another crushing blow to those sorry souls puffing away outside your office building's doorway, the Australian government moved Thursday to revise cigarette packaging, stripping those little boxes of cancer sticks of their iconic Marlboro reds and Camel camels. They will, however, still sport the bold, often vivid anti-smoking warnings the Australian government already requires -- featuring rheumy eyes and rotted brains. The packaging requirement is similar to one in place in Canada, where a box of smokes might come with an image of a diseased heart.

The Australian crackdown on packaging comes with a hefty hike in taxes on cigarettes as well, but it's those graphic images on the packaging, along with messages like "Don't let children breathe your smoke" that seem to veer beyond the public health imperative -- and take smokers right into Shame Town.

I'm not pining for the days when an evening in a bar meant coming home with a stinky sweater. Nor am I a fan of smoking-related disease -- which took the lives of two of my immediate family members. But hey, considering that heart disease is a leading cause of death, why don't we put just put photos of blocked arteries on every bucket of KFC, too?

With each new anti-smoking campaign, the shock and awe factor seems to amp up -- and there's something terribly scoldy in the tactic. A crying child may make smokers think twice about how alive with pleasure they really are, but there's also a smug, don't-be-that-pariah subtext. Significantly, those vivid messages may not even be effective. A Canadian study released in January suggested "the stigma around smoking could lead to patients hiding their tobacco use from doctors, and feeling desperate about ever kicking the habit." And in his book "Buyology," Martin Lindstrom argued that those vivid anti-smoking warnings can actually increase cravings in smokers' brains.

We've come a long way, baby, from my own childhood of making ashtrays in art class. And those glamourized images the tobacco industry once freely peddled were a deadly fiction. Now, in their place, there's a photo of a rotted tooth prominently displayed near the checkout at my local drugstore. There's a subway ad featuring a smoker showing off her amputated fingers that's been known to make my daughters burst into tears. This is progress?

Maybe. Or maybe it's like using a baseball bat to swat a mosquito -- and hitting a lot of butterflies in the process. Because all of us have to look at diseased lungs every time we just want to buy a candy bar. And while the human toll of smoking is still far too great – in the U.S. it's an astonishing one in five deaths -- the inconvenient truth is that not everyone who smokes is going to wind up with gangrenous toes.

Smoking, unlike a lot of other unpopular habits, is highly participatory in its nature. It immediately affects anyone in its range, in a way that even its next-closest vice kin -- drinking -- doesn't. Then there are our alarmingly high insurance premiums, which smokers are doing a whole hell of a lot to increase. So it's understandable that it's not just smokers who feel a personal stake in the smoking debate. But if we're talking about promoting health, why not encourage more healthy tactics? Why not ratchet down the shaming?

Want to up the vice tax on cigarettes or restrict where people can smoke? Great. That's a clean air win for everybody. But I'm not sure that making smokers feel like lepers is an effective strategy. Thursday, the World Health Organization called the tough new Australian initiative a "major breakthrough." But for those of us who don't smoke, those aggressive, in-your-face images are just another uninvited, flat-out-gross nuisance. Kind of like cigarettes themselves. And at this pace, it won't be long before those warning labels have to come with warning labels.