With the White House playing by the old rules of media management, Justin Bieber is the press corps' new bicycle 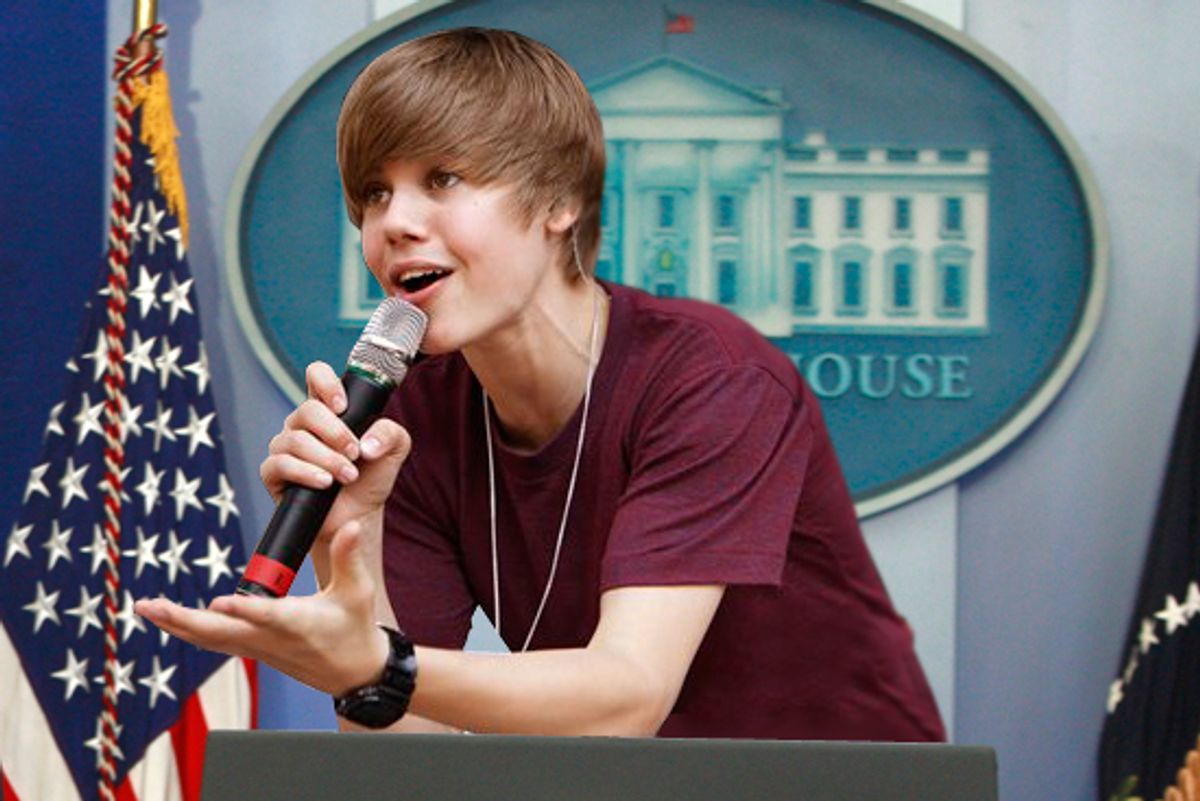 Politico CLICK reports: "For NBC's Chuck Todd, being a White House correspondent is a lot like being in school." Specifically, the White House press corps is like high school, in that enrollment in it signals the coming of adolescence. Formerly reasonable people become White House Correspondents and rather suddenly become moody, thin-skinned and self-aggrandizing.

Here's the current drama: The press corps used to have a big crush on President Obama, but he's become distant and he never returns their texts and he doesn't like to talk to them in public. (They are also worried that he is maybe "going steady" with recent press corps graduate Richard Wolffe, who's currently majoring in sycophantic book-writing at Woodward U.) They guilted Obama into sitting with them at lunchtime the other day but he only talked to them for like 10 minutes.

But this weekend is prom! The press corp is on the prom planning committee, so everyone will totally be nice to them for at least a weekend. The president has to come and watch them hang out with Justin Bieber -- he'll be sooo jealous.

I can understand why the president would prefer sit-down interviews with individual journalists to taking questions at the podium from the assembled press. The daily game of TV personalities shouting oversimplified questions about the latest overblown outrage in order to get good footage for the nightly news bears slightly less of a resemblance to public service journalism than paying for access to a misplaced prototype smart phone. A long-form sit-down talk allows for greater complexity and nuance in both questions and answers. But those also look like giving access solely to administration-friendly reporters. (Except for that Bret Baier thing, right?)

These always-unnamed members of the press corps do have a legitimate grievance: The White House press office is awful and controlling and plays favorites and would prefer to solely control all the information that is distributed to the public. That's also true of every White House press office. It is the press's job to have a contentious relationship with the White House. The annoying thing about this White House is that it thinks it can get away with shit because it's on the side of Good. But this particular class of the press corps' complaint often seems to just be that they were promised transparency (Barack Obama was going to be their boyfriend) and instead they're getting more of the same (they have to do their jobs). And the Obama criticism of cable news practices and the breathtaking cynicism of the Politico mind-set is pretty much dead-on, even if media folks don't like it when the president plays at being a media critic.

Anyway! We have a cowardly and cynical press corps made up primarily of people who understand politics solely as a zero-sum game of ruthless skill coupled with a White House that thinks it has the right to dissemble and intimidate and whitewash solely because they're not as bad as the other guys. And on Saturday night they will all dress up in their finest rented tuxedos and pretty dresses to listen to the wacky comedy stylings of despised hack comedian Jay Leno.  And then someone (Sally Quinn) will spike Justin Bieber's ginger ale  at the Bloomberg/Vanity Fair party.  It's a good weekend to be in New York.