Charlie Crist is officially an independent

The Florida governor goes home to St. Petersburg to announce the annulment of his sham marriage with the GOP 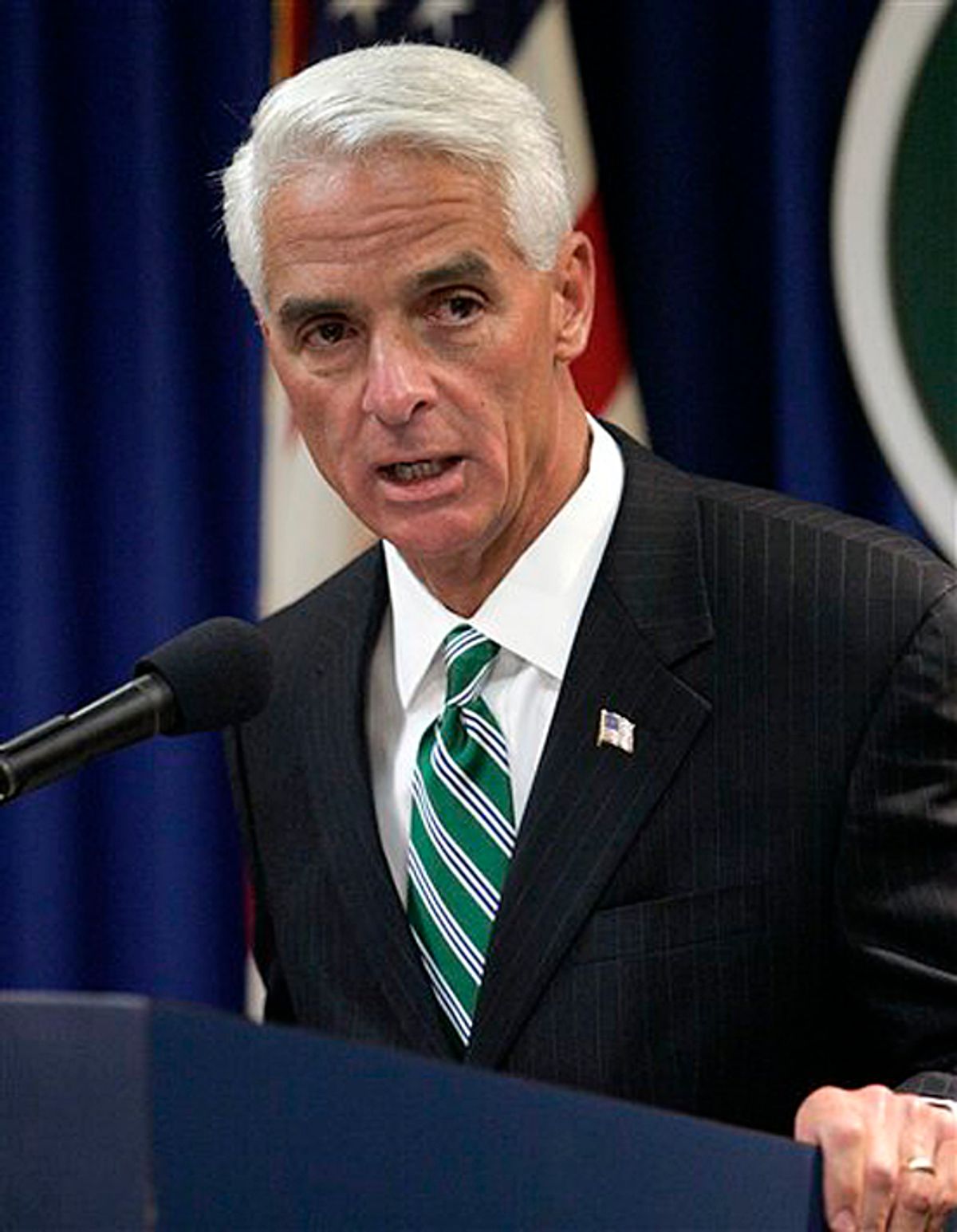 FILE - In this April 15, 2010 file photo, Gov. Charlie Crist speaks in Tallahassee, Fla. Plan A isn't working so well for Gov. Charlie Crist, a former rising Republican star who now trails badly in the Florida Senate primary, but Plans B, C and D don't look much better. His populist approach to governing no longer sits well with angry conservatives who have abandoned him in favor of his primary opponent, former state House speaker Marco Rubio. (AP Photo/Steve Cannon) (Steve Cannon)
--

Charlie Crist was late to his big announcement, presumably to give himself just a little more time to decide whether or not to endorse Rudy Giuliani for the 2008 Republican presidential nomination, but he finally made it official: The Florida governor is an independent candidate for the U.S. Senate.

Crist, in shirtsleeves because he is working so hard for You, had a pretty loud and receptive crowd of supporters. His speech was, eh. We learned that Republicans abandoning Crist for the crime of hugging Barack Obama is proof that "our political system is broken," which is a bit self-absorbed. And: "I'm aware that after this speech ends, I don't have either party helping me." That was increasingly true before the speech. In fact, that's why he had to give the speech.

(Playlist before his announcement included "We Will Rock You" and "Born in the USA." Not played: "Killer Parties" by the Hold Steady.)

Crist will be sixth or lower on the ballot, with Democrats and Republicans first, followed by people who managed to get random made-up minor parties to nominate them, followed by sad Charlie Crist, "no-party affiliate."

Most Republicans will now officially be done with Crist -- with the probable exception of his good friend John McCain, which just confirms my suspicion that Crist would be one of those senators. (Should Crist be elected, Jennifer Duffy even recommends that he "leave open the question of who he would caucus with," to ensure, again, that he annoys the greatest number of people at once.)

Of course, the race will now be decided solely by either the Democrat capitalizing on his registration advantage or by credit card scammer Marco Rubio sailing to victory with the support of the angriest, Birtherist, Tea Partyingest third of Floridians (plus one elderly Palm Beach voter confused by the ballot). But it will very fun for everyone to cover.

Was Crist forced to run as an independent because the Tea Partiers have hijacked the Republican Party and purged it of moderates? Is Crist purely a victim of anti-incumbent fervor? Is this definitive and official proof that the voters have rejected Obama's Big Government agenda and he should immediately tack to the center? I dunno, but if you decide to repeat any one of those statements, you, too, can communicate an opinion about this story on a CNN panel.