We (meaning you) must tighten our belts

Who's getting sick of hearing millionaires lecture people on Medicare about making sacrifices? 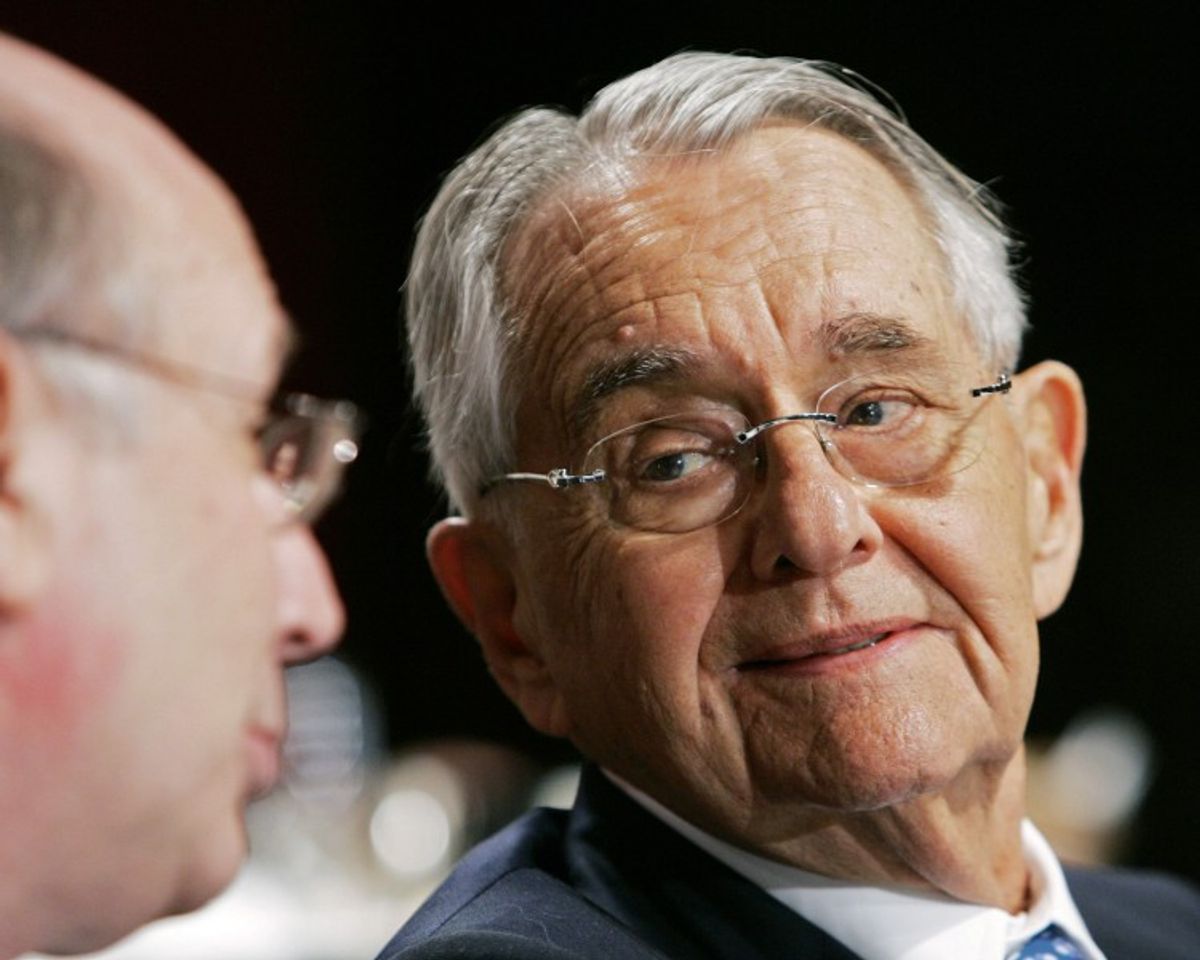 Dean Baker attended the Pete Peterson Social Security Destruction summit earlier today and made this important observation at the revolting sight of Peterson and Robert Rubin patting each other on the backs and demanding that everyone buckle down and sacrifice for the greater good:

Peter Peterson and Robert Rubin are both enormously wealthy men. (They joked about dividing their lunch tab based on their net worth.) They are lecturing the country on the need to cut Social Security and Medicare benefits for retirees who have a tiny fraction of their wealth. Many of the victims of the cuts that they would push are people who are already struggling.

This is so common among the ruling elite that people don't even recognize it anymore. Here's my favorite example from Mrs. Alan Greenspan way back in January of 2009:

MSNBC commentator: ... The subtext of all of this [call to service] is "hey Americans, you're gonna have to do your part too. There may be some sacrifices involved for you too." Do you think he's going to use his political capital to make those arguments and will it go beyond rhetoric?

Andrea Mitchell: It does go beyond rhetoric. He needs to engage the American people in this joint venture. That's part of the call. That's part of what he needs to accomplish in his speech and in the days following the speech. He needs to make people feel that this is their venture as well and that people are going to need to be more patient and have to contribute and that there will have to be some sacrifice.

And certainly, if he is serious about what he told the Washington Post last week, that he wants to take on entitlement reform, there will be greater sacrifice required from a nation already suffering from economic crisis --- to ask people to take a look at their health care and their other entitlements and realize that for the long term health and vitality of the country we're going to have to give up something that we already enjoy.

As I noted at the time:

This is the where the Village metaphor really hits home. Mrs. Greenspan and the rest of the Beltway insiders have all convinced themselves that their little village represents Real America. So when someone suggests that "entitlements" have to be cut for the common good, that seems like something that nobody should really squeal too much about since they don't know a single soul who will be even slightly inconvenienced by such a thing. S.S. is chump change to these people, not even really worth collecting (but just try to take it from them).

Now, repealing their tax breaks -- that's the kind of sacrifice no self-respecting Real American should ever stand for. Here's Baker again:

... there are ways to get the long-term deficit down to size that don't involve nailing middle income and/or poor people. However, it would be hard to find two people who have benefited more from taxpayer handouts than these two individuals.

Peter Peterson has been the recipient of tens of millions of taxpayer dollars through the fund manager's tax break. This tax break, which is also known as the "carried interest tax deduction" allows managers of hedge and equity funds to pay tax on their earnings at the 15 percent capital gains tax rate, instead of having it taxed as normal income. As a result, Peterson paid a lower tax rate on much of his earnings than tens of millions of people working as school teachers, fire fighters, and other middle income jobs.

Peterson not only collected the money himself, he came to Washington in 2007 to lobby Congress when it debated ending the tax break. He apparently wanted to make sure that his friends would still be able to benefit from this tax break even after he had retired.

After setting the country on a course for the current crisis with the policies he pushed as Treasury Secretary, Robert Rubin went to work as a top executive at Citigroup. In this capacity, he earned $110 million before leaving the company in the middle of its 2008 meltdown. As we know, Citigroup was one of the major actors in the housing boom. It produced hundreds of billions of dollars worth of mortgage backed securities.

We all know what happened with Citi.

These rich bastards are telling people who work hard their whole lives that they have to "sacrifice" their meager public pension to refill the Treasury that these same rich bastards have looted --- and which they continue to refuse to help replenish, despite the fact they are still swallowing fire hoses full of money. This, after the middle class in this country just suffered the biggest loss of wealth since the Great Depression as a result of these riverboat gamblers playing with the economy like it was their favorite Baccarat table in Monte Carlo. Chutzpah doesn't even begin to describe it. Sociopathy is more like it.

If they can't do the right thing, the least they could do is slither off into the darkness to count their winnings. Instead, these arrogant jerks are out there lecturing everyone about "sacrifice" while they buy off every government official in town to make sure they aren't among those who have to heed that call.