EU to phase out restrictions on liquids in carry-ons

The million-dollar question: Will the TSA see the light and follow suit? 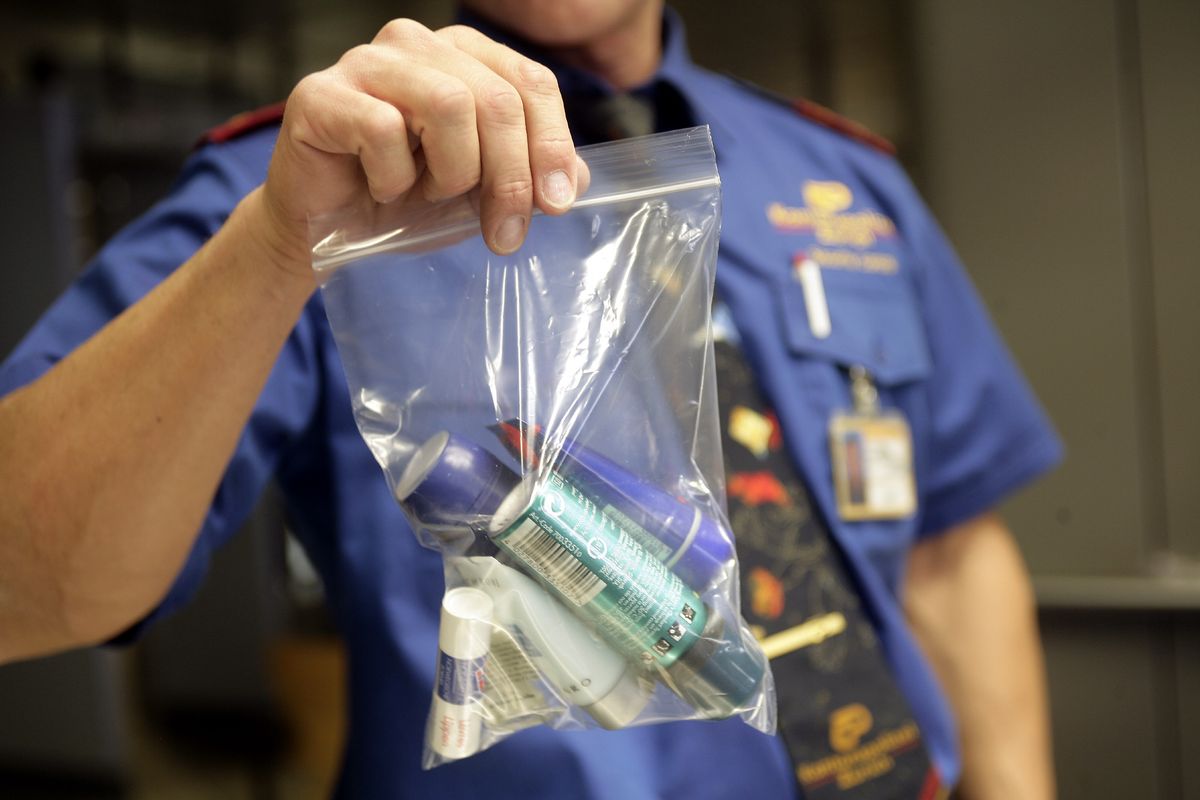 A security officer shows a plastic bag which contains a passenger's liquid belongings at a security gantry at Zurich airport November 6, 2006. Air travellers in Europe must pack water, perfumes, toothpastes and other liquids into a small plastic bag before going through airport security checkpoints under new rules that enter into force on Monday. The rules limit the amount of liquids people may take on board planes and reflect efforts to standardise measures put in place in Europe after London authorities said in August they had foiled a plot to bomb flights bound for the United States. REUTERS/Andreas Meier (SWITZERLAND) (Reuters)
--

On Thursday, the European Union announced it would begin phasing out its draconian restrictions on liquids carried in hand luggage.

It's about time. The ban is to be completely rescinded by mid-2013 at the latest, according to officials.

Liquids, gels and aerosols will instead be run through a new generation of explosives scanners able to screen them for harmful materials. Getting these machines up and running will be very expensive, and the technology is not yet foolproof. But nothing in aviation security is foolproof, and anything is better than the chaotic confiscation policies now in place.

Why are the Europeans always one step ahead of us?

And, obviously, the million-dollar question is: Will our own Transportation Security Administration follow suit?

Considering the potential complications involving transit passengers arriving from Europe, they're going to have little choice, frankly, unless they wish to turn the average American security checkpoint into an even crazier place than it already is.

Hardly out of the question, of course, but let's try to be optimistic.

In case you've forgotten, the ban was put in place after British police broke up a plot to bomb transatlantic jetliners using explosives.

Contrary to many reports, the bombers had no formal al-Qaida ties, and were nowhere close to pulling off their scheme. Many people, for what it's worth, believed the entire story to be overblown.

Shortly after the arrests, a New York Times story revealed that the conspirators, who have since been sent to prison, had been known to law enforcement officials for at least a year. They lacked passports, airline tickets and, most critical of all, had been unsuccessful in actually producing any liquid explosives. "The reactions of Britain and the United States," said the Times, "… were driven less by information about a specific, imminent attack than fear that other, unknown terrorists might strike." British officials described the widely parroted report that up to 10 U.S airliners had been targeted as "speculative" and "exaggerated."

Among others to express serious skepticism about the bombers' readiness was Thomas Greene, whose essay in the Register explored the extreme difficulty faced in deploying the types of binary explosives purportedly to be used.

Speaking with me in August 2006, Greene conceded that the threat of liquid explosives does exist, but that they cannot be readily brewed from the kinds of liquids we have since devoted most of our attention and resources to keeping away from airplanes. Certain benign liquids, when combined under highly specific conditions, are indeed dangerous. However, creating those conditions poses enormous challenges for a saboteur. "The notion that deadly explosives can be cooked up in an airplane lavatory is pure fiction," said Greene. "A handy gimmick for action movies and shows like '24.' This, incredibly, is why you can no longer carry a bottle of water onto a plane."

Others are less dismissive. They point to the near-success of the so- called Bojinka plot back in the 1990s. Bojinka was the brainchild of Ramzi Yousef, a master mixer of liquid explosives, and his uncle Khalid Sheikh Mohammed. The latter would go on to mastermind the Sept. 11 attacks, while Yousef was already a wanted man for his role in the 1993 World Trade Center prelude. The Bojinka plan, which the London cabal would later attempt to emulate, was to blow up 11 widebody jets simultaneously over the Pacific Ocean.

The bombs, made from nitroglycerin, sulfuric acid, acetone and other chemicals, would be hidden with the under-seat life jackets. In 1995 Yousef completed a successful, small-level test run on a Philippine Airlines 747, killing a Japanese businessman. But the plot was broken up after authorities investigated a chemical fire in the Manila apartment of one of Yousef's accomplices.

Frightening, yes, but the specs of the Bojinka plot don't really square with the arbitrary screening policies today in place.

The 3-ounce container rule is silly enough -- after all, what's to stop somebody from carrying several small bottles, each full of the same substance -- but consider for a moment the hypocrisy of TSA's confiscation policy. At every concourse checkpoint you'll see a bin or barrel brimming with contraband containers taken from passengers for having exceeded the volume limit. Now, the assumption has to be that the materials in those containers are potentially hazardous. If not, why were they seized in the first place? So why are they dumped unceremoniously into the trash? The agency seems to be saying that it knows these things are harmless. But it's going to take them anyway, and either you accept it or you don't fly.

And to this day, I still don't know if can legally bring aboard a container of mashed potatoes. Mashed potatoes are a hybrid threat: not quite solid, not quite liquid, and only semi gel-like (unless they're overcooked). Can I carry some onto my flight?

A silly question, you think, but when I posed this scenario to a TSA spokesperson, she took it seriously and was unable to come up with an answer.

And there was, more famously, the 2006 incident involving my mother, who although she passed away last October is doubtless looking down on all of this with a chuckle. I will repeat the story below for those of you who missed it, and because it's too good not to:

What with the preponderance of spaghetti grenades and lasagna bombs, we can be grateful for TSA's vigilance in discovering a large container of homemade tomato sauce in my mother's carry-on. As a liquid, tomato sauce was in clear violation of the TSA's carry-on statutes. But this time, there was a wrinkle: The sauce was frozen.

This put the guards in a scramble, and at one point a supervisor was called over to help assess things. He spent several moments stroking his chin. At last, drawing from his vast knowledge of refrigeration, he observantly sized things up.

One of his colleagues murmured that maybe it was a test.

"Please," urged my mother. "Please don't take away my dinner."

Lo and behold, they did not. Whether out of confusion, sympathy or embarrassment, she was allowed to pass with her murderous marinara.

Which gets us thinking. If it is unrealistic to expect TSA to overhaul its entire approach, is it too much to ask, in consolation, for the agency to exhibit a little common sense now and then, sanctioning some flexibility in its protocols? If we're to believe that TSA screeners are highly trained professionals, as the agency maintains, can they not handle the responsibility of making an occasional judgment call, some on-the-spot decision-making? If you've got a 6-ounce container that is half-full, how about employing some common sense rather than demanding it be handed over?

The maximum allowable container size is actually 3.4 ounces, by the way, or a hundred milliliters. It has always frustrated me that the "travel-friendly" containers sold in stores and supermarkets are always an even 3 ounces. We're being cheated out of nearly half an ounce!