How the GOP gets away with it

It's pretty simple: They repeat the same thing over and over until everyone gets tired of correcting them 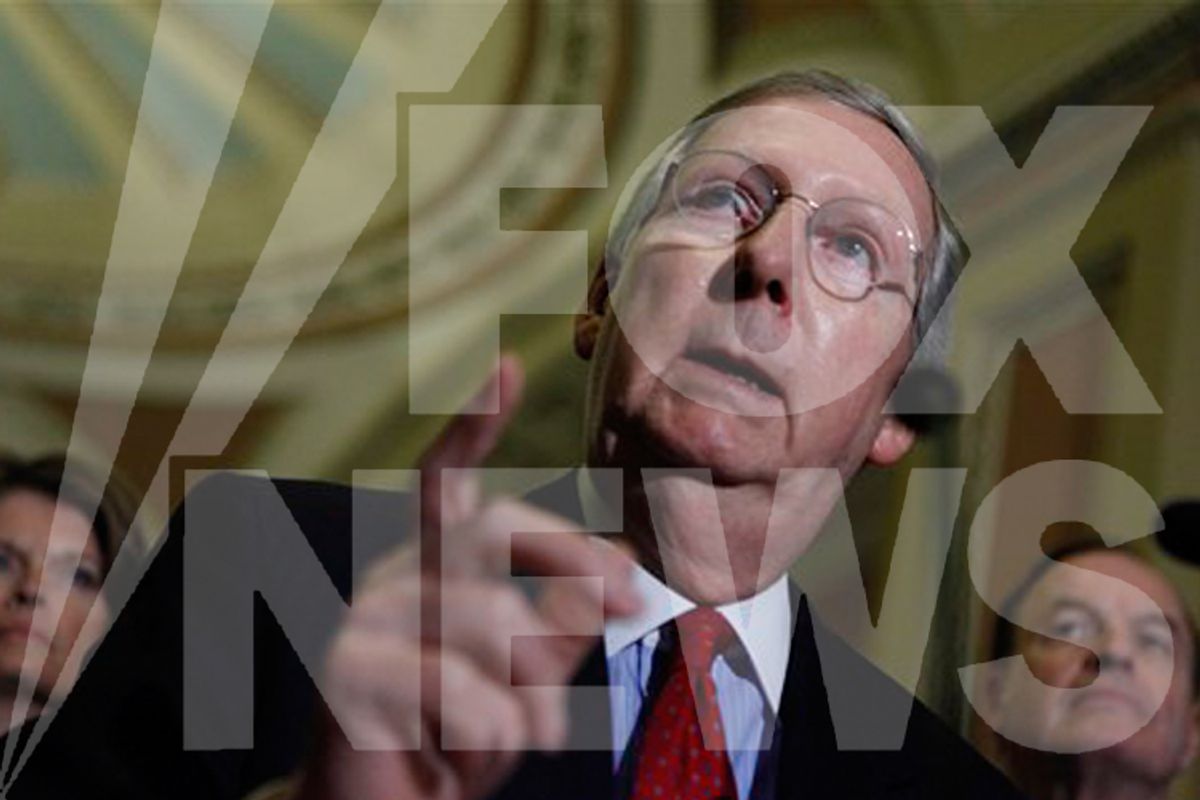 Has the Republican Party gone completely off into Cloud-Cuckoo-Land, or have its leading spokesmen simply decided to mimic the party's entertainment wing: trusting its loyal audience to believe even the most brazen falsehoods, and, equally important, to remember nothing?

Does unwillingness to engage reality signal an acceptance of minority status, or merely disdain for the GOP base?

After all, you can trick a cow with an empty feed bucket once or twice. By the third try, it won't even look at you.

Consider Senate Minority Leader Mitch McConnell, R-Ky. For weeks, McConnell has been trying to prevent action on pending financial-reform legislation by claiming that it would lead to "endless taxpayer bailouts of Wall Street banks."

In reality, the proposed law would do exactly the opposite: liquidating failed investment firms' assets through a process like the one used by the FDIC to shut down insolvent savings banks. Management would be fired and shareholders given nothing until creditors had been paid. Wall Street firms would be required to pay into a fund underwriting the arrangement. Taxpayer dollars wouldn't be used.

Even Sen. Bob Corker, R-Tenn., who helped draft the legislation, has pointedly contradicted McConnell's mischaracterization. New York Times columnist Paul Krugman has characterized it as "possibly the most dishonest argument ever made in the history of politics."

Even so, Krugman's hyperbole is understandable. Say what you will about academia, in professorial debate so blatant a misrepresentation would be seen as a shameful confession of weakness. Somebody who can't win an argument without resorting to a simple "black is white" lie gets as little respect as he deserves.

Elsewhere, Krugman puts the question in an appropriately Orwellian context: "Has there ever been a time in U.S. political history," he asks, "when one of the two major political parties was so addicted to doublethink, so committed to pretending that it's advocating the opposite of its actual agenda?"

Specifically, McConnell came up with the "bailout" fiction immediately after meeting with Wall Street high-rollers who a) want to keep placing risk-free bets with other people's money; and b) certainly don't want to pay for what amounts to bankruptcy insurance. Sympathetic to the McDuck point of view, McConnell evidently figures that if he can stall the bill for a while, he can get Uncle Scrooge (and eventually himself) a better deal.

Blogger Matt Yglesias fears that such tactics do nothing but work. "True or false," he writes, "the overwhelming evidence is that the media gets bored with these fact checks very quickly and that if you just put your head down and charge forward, you come out a couple of weeks later back into 'he said, she said' territory. The only real test for whether or not lying works is whether or not you can bring your ideological fellow travelers along. Will Rush Limbaugh and Sean Hannity and Glenn Beck echo your line? Will the Weekly Standard and National Review? Will the bulk of your legislative caucus? The answers are yes, yes, and yes."

Actually, we're already there. Just watch. Virtually every TV report on the financial-regulation bill you see will feature a sound bite from McConnell, who'll continue to shill for Citibank and Goldman Sachs while pretending to defend the little guy. Bailout, bailout, bailout. The fact that he's engaging in pure doublespeak is highly unlikely to be mentioned. Instead, you'll likely see a snippet from a Democrat making the opposite claim. For an awful lot of viewers, that's like flipping a coin.

For Fox News viewers and Limbaugh listeners, it's actually easier than that. Conditioned by decades of propaganda about liberal media bias, many react with overt hostility to any and all information from other sources. I must get 50 angry e-mails a week calling me a liar for citing some easily verifiable fact at odds with right-wing doctrine.

Recently, certain conservative intellectuals have begun to worry about whether this hasn't left the movement flying blind. "One of the more striking features of the contemporary conservative movement," writes Cato Institute's Julian Sanchez, "is the extent to which it has been moving toward epistemic closure. Reality is defined by a multimedia array of interconnected and cross-promoting conservative blogs, radio programs, magazines, and of course, Fox News. Whatever conflicts with that reality can be dismissed out of hand because it comes from the liberal media, and is therefore ipso facto not to be trusted."

The movement, hell. It's making the whole country as dumb as a brontosaurus in a blizzard. Because reality eventually asserts itself.