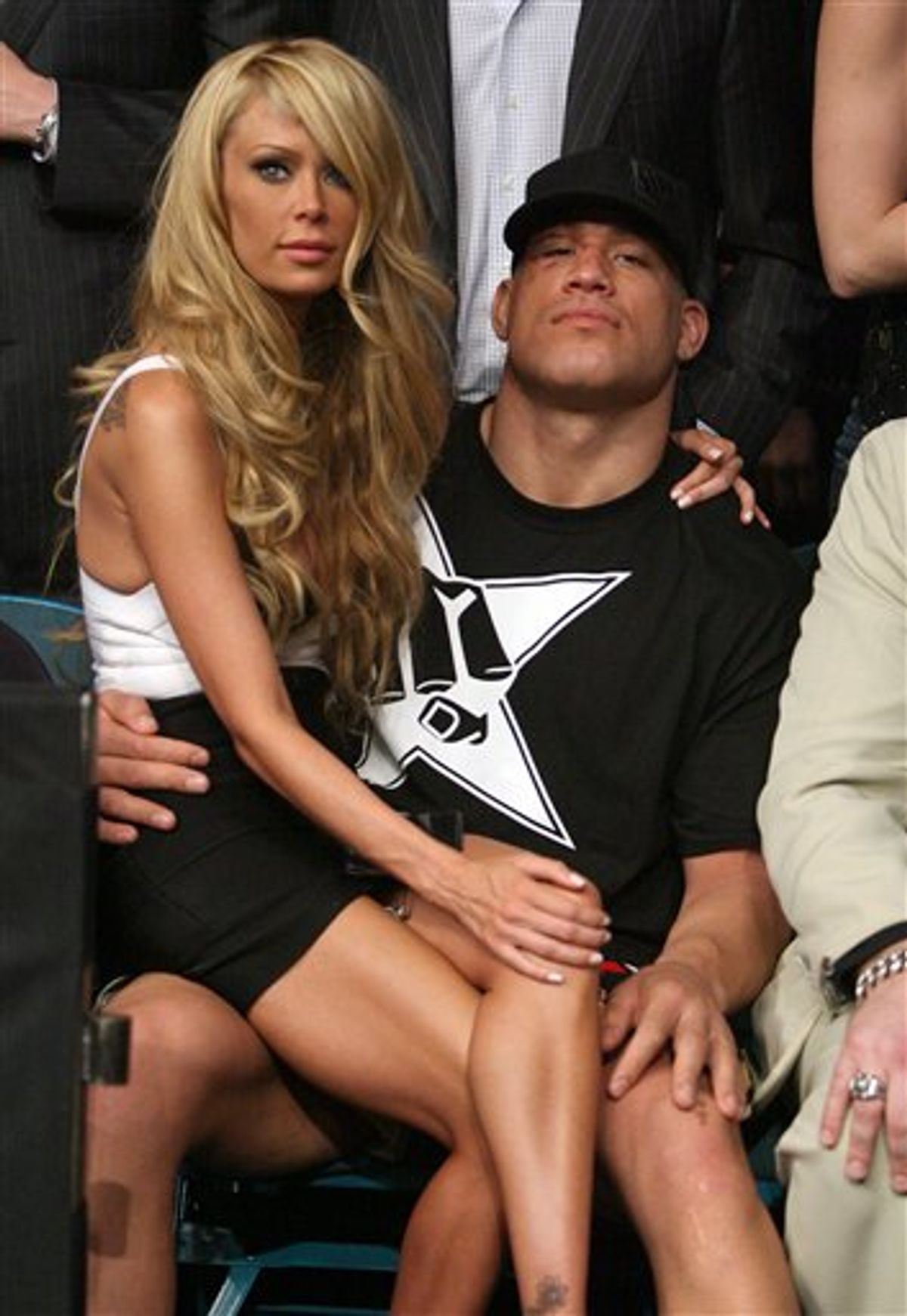 FILE - In this May 24, 2008 file photo, mixed martial arts star Tito Ortiz, right, is seen with Jenna Jameson after his fight at UFC 84 at the MGM Grand Garden Arena in Las Vegas. Ortiz was arrested on suspicion of domestic violence Monday, April 26, 2010, at the home he shares with Jameson. (AP Photo/Eric Jamison, File) (AP)
--

The UFC star was arrested Monday on suspicion of domestic violence at the home he shares with Jameson and their twin boys in Huntington Beach, Calif. Soon after, Jameson told the press that after saying "something very hurtful to his ego," he threw her into a bathtub and "tore two ligaments in [her] shoulder." She added: "It hurts me to think that everybody out there thinks he beat me. He did not beat me. If he would have beat me, I would be dead right now. There was an altercation."

After posting bail, Ortiz held a press conference and claimed that Jameson had "been fighting a battle with OxyContin addiction for the past year" and relapsed the morning of the incident, which led to an argument -- but he denied laying a hand on her. In turn, she denied his claim, saying he was trying to "save [his] ass for being a wife beater," and promised to press charges. Jameson took a drug test, which reportedly turned up clean. Then Joslyn James, Tiger Woods' porn star mistress, waded into this mess to say that she had seen Ortiz rough up Jameson on three separate occasions.

Doesn't really matter, because now it appears both Jameson and Ortiz are changing their story. Today, Jameson told TMZ: "What actually happened has now been dramatically distorted and misinterpreted and remarks that both Tito and I made after the police arrived reflect the state of shock that we were both in." Her lawyer told E! News that she isn't pressing charges and never actually planned to. Meanwhile, the mixed martial artists' lawyer says it was just "a big misunderstanding," and TMZ reports that Ortiz is now claiming that he found two OxyContin pills that turned out to be "very old" (in other words, she isn't using, after all) and "may have jumped to conclusions."

This is good news for Ortiz, whose fighting contract was on the line -- the last thing the UFC wants to be associated with is domestic violence -- but the police investigation is still under way, regardless. In the meantime, the press is taking this latest development as a cue to return to its usual porny word play -- now with fun sexual innuendo about the couple's "happy ending."