If you think the show's Muslim brouhaha was messy, you should see what's going on in the neighboring town 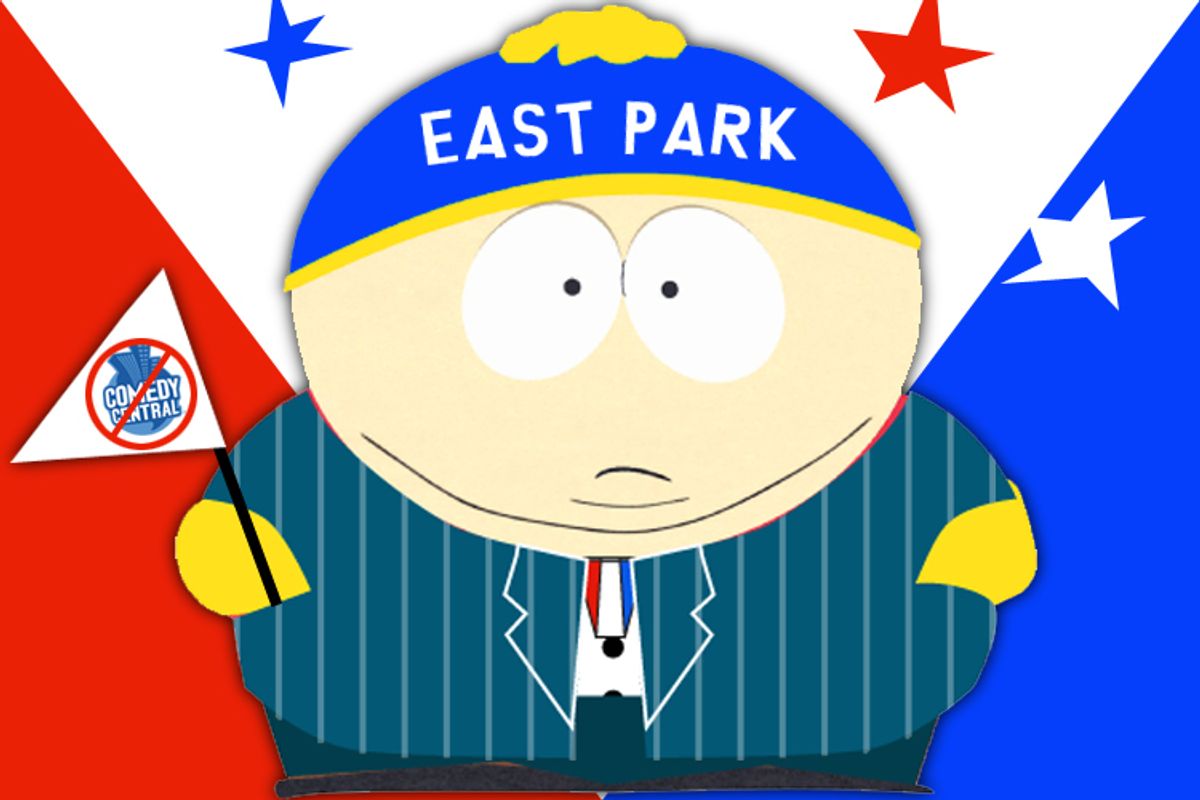 Setting: A community town hall meeting for the citizens of EAST PARK, a neighbor of SOUTH PARK, to discuss Comedy Central’s recent censorship of a harmless cartoon portraying Prophet Mohammed due to veiled threats against the cartoon’s creators by two loners named De-volution Islam.

A corpulent child wearing a Savile Row business suit and a red, white and blue ascot climbs onto the stage. He is wearing a shiny American flag pin on his lapel. He steps on a milk carton to stand behind the dais and assumes control of the meeting by slamming his gavel.

KKKARTMAN: Order! Order! By the power vested in me. By myself and all freedom-loving, patriotic, deodorant-wearing, one-true-God-fearing citizens of East Park, I hereby declare moral outrage! Outrage, I say! Why, you ask? WHY?! Because the godless, liberal Benedict Arnolds at Comedy Central have prostrated to the altar of political correctness! They have succumbed to the demands of a legion of intolerant, extremist, Islamist, Muslim fundamentalists whose only logical response to a satirical cartoon lampooning their Prophet is violence, reactionary rhetoric and bad hygiene! Ha! This is what happens when you elect a Muslim president!

Three schoolchildren are seated in the audience. They are friends of KKKartman. They are EVERYMAN STAN, IBN KYLE and COMMON SENSE KENNY. Everyman Stan gets up to speak.

EVERYMAN STAN: KKKartman, dude, I totally understand why you're pissed off. Comedy Central acted like cowardly tools by censoring artistic expression and betraying the power and value of freedom of speech. But, don't you think you're exaggerating the threat and the problem? It wasn't a legion of Muslims who got upset. Just two nutjobs, called DEVOS, who posted something on their website, De-volution Islam. Most Muslim Americans, like our buddy Ibn Kyle here, understand that art is often used as a necessary vehicle to promote healthy national discussions about culture and politics.

IBN KYLE, the token Muslim, gets up to speak.

IBN KYLE: Thanks, Stan, I just wanted to say --

KKKARTMAN: Silence! In America -- unlike those other places like Falafel-Stan -- we tolerate criticism and differing opinions! To prove my point, I've invited a world famous expert on Islamism who is thoroughly America-holic! Hearsay Sally!

HEARSAY SALLY: As the unofficial ambassador of 1.5 billion Muslims and an unofficial expert on their complex and diverse 1,400 year history, allow me to officially conclude that most Muslims are unable to understand the concept of free speech. They cannot comprehend that in a democracy it's a two-way street, buddy! Like the illegal immigrants in Arizona, they just take, take, take! And what do they give in return? Death threats, tyranny, terrorism, assassination plots and bad shwarmas! In order for them to truly understand the meaning of a freedom-loving, tolerant Western democracy, we must force them to abandon their tyrannical religion and embrace respect for the law!

DEVOS: As official representatives of all real, hardcore, non-sellout Muslims, we hereby declare a fatwah against the citizens of East Park for your war against Islam! Someone … somewhere … at some time … might try to harm you for your trespasses against Allah … maybe ... perhaps ... we're just saying … not really … but kinda. However! This much is certain: Your disrespect of the Prophet in a harmless cartoon is clear evidence of a global Western campaign of systematic oppression against all Muslims!

KKKARTMAN: You two gays should be tried under military tribunal for your unilateral criticism!

DEVOS: There are no gays in Islam!

BIG GAY ALADDIN: (Singing a song) Bombs are flying! People are dying! Children are crying! Politicians are lying! The whole world's gone to hell! And you're all wasting our time talking about a stupid cartoon! But, how are you? I'm SUPER! Thanks for asking!

DEVOS stare with disgust, shake their head, rub and yank on their fake beards.

DEVOS: See the fruits of your Western decadence? What, with your Western mongering of godless stilettos, affordable Girls Gone Wild DVD sets, enticing late-night Cinemax softcore pornography, and voluptuous breasts no wonder the world is besieged with natural disasters like typhoons and earthquakes!

EVERYMAN STAN: Dude, he did not just make the boob-quake argument?!

IBN KYLE: I think he just did!

KKKARTMAN: Enough! Let the lady speak. In our culture, we let women have a voice --

KKKARTMAN puts his hand in front of her mouth and muffles it.

KKKARTMAN: As sugar tits was saying, we cannot let this belligerence abide! The first stop for Islamists: censoring Comedy Central! The next stop: Sharia law in the U.S.A.!

EVERYMAN STAN: Enough! This is Madness!

EVERYONE ON STAGE: (yelling) No! This is East Park!

EVERYMAN STAN: You know what? You guys are what's wrong with this country. All of you! (Points to the speakers on the stage) Instead of -- God forbid -- acting as voices of reason and moderation, you're more interested in peddling your selfish agendas. You're not interested in protecting anyone's right to free speech or defending artistic expression -- except your own! You cynically manipulate and use moments of crisis like this to further your own political propaganda!

All the speakers make frowning faces and look sad and ashamed.

Common Sense Kenny hops onstage and approaches the dais. As he's walking, DEVOS stick out their feet, trip him and violently push him to the floor. SALLY stabs him in the head with her stiletto heel and KKKARTMAN strangles him with the microphone wire.

Wajahat Ali is a journalist, attorney, humorist and the playwright of "The Domestic Crusaders." He blogs at Goatsmilk: An Intellectual Playground.