A real-life treasure hunt takes off

Twelve emeralds are buried in 12 holes around the country. Can you find them? 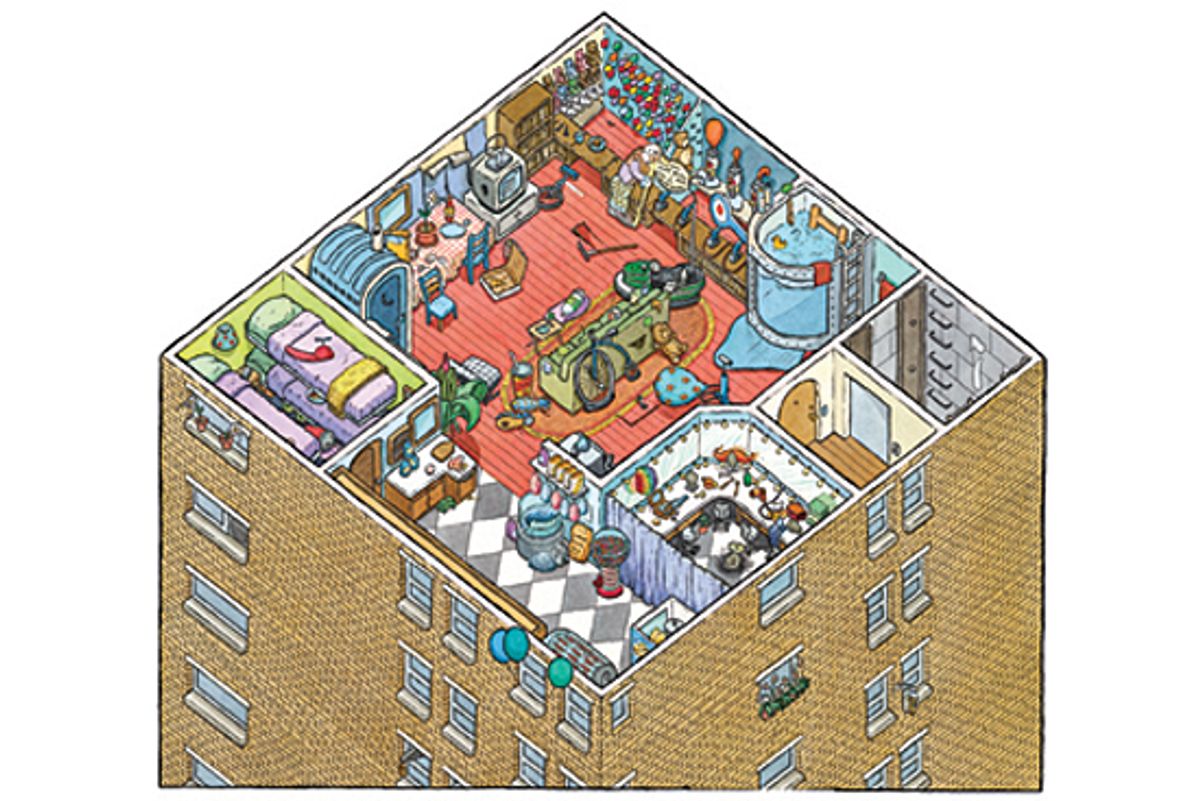 That’s right; throughout this fine land, twelve handcrafted, one-of-a-kind, gem-encrusted numbers lie buried in the soil. If you can find them, they’re yours to keep. But where are they? The only path lies in solving the riddles in McSweeney’s newest title, "The Clock Without a Face." Get a head start on the hunt. Pick up an advance copy of "Clock" here or at your local bookstore starting May 14.

Last Wednesday, Aaron Holmes woke up early and packed a lunchbox with candy, bananas, and PB&J sandwiches, "because they make excellent adventure food." He grabbed an emergency kit containing a bit of string, a hammer, and a flashlight, a five-dollar Wal-Mart shovel, and a copy of "The Clock Without A Face" -- his field guide for the journey ahead of him.

The book, an illustrated mystery caper, contains hints about the whereabouts of twelve real-life treasures buried around the country. Using the clues they decrypted from the house-shaped board book, Holmes and his wife Elissa set out from their Amherst, Mass. apartment in their Honda Accord for a digsite several hours out of state. Holmes, 24, took off work for his day hunt. He guesses he’s spent $70 of his own money looking for the precious jewels -- all in pursuit of being the first to crack the mystery. "I know it’s within my reach," Holmes says.

Clock is an "armchair treasure hunt" -- a book that combines old-style riddle solving with real-life treasure hunting. McSweeney’s contracted Anna Sheffield, a well-known New York–based jewelry designer, to craft twelve bejeweled numerals that now lay underground -- in the real-life ground -- in twelve holes around the country. Through a series of acrostics and illustrated ciphers, the book reveals the locations of the numbers as it spins a whodunit tale, the story of a mysterious clock robbery.

The gist: The Emerald Khroniker -- jewel-emblazoned timepiece/famously cursed clock -- has been stolen from Bevel Ternky’s penthouse apartment in Ternky Tower. Detective Roy Dodge is on the case. With the help of his sidekick ("confidential assistant") Gus Twintig, our charmingly bumbling narrator, Dodge visits each of the thirteen apartments in Ternky Tower, starting at the penthouse and making his way down. Dodge vows to solve the crime by the time he reaches the lobby. Each of the thirteen apartments has been burglarized, and each eccentric, Dickensianly named resident has an encoded story to tell. On the facing page, we are provided with Gus’s illustrations of each crime scene from bird’s-eye-view perspective, with even more clues to sift through.

Paul "P.K." Quello (Paulo Coehlo?) is an alchemist living on the twelfth floor. In his flat we see a chalkboard with chemical equations (do the numbers mean something?) and a machine that transforms tears into clouds. Eighth-floor residents Amber and Jamie Kaulken (Macaulay?), their parents on vacation for weeks, are living in squalor, with bags of trash in the living room and the TV on full blast. On the fifth floor, Vera Mazel and Josie Grey, a couple of old spinsters, are -- curiously -- working on a pentagonally shaped puzzle book. There are pink donuts everywhere.

By the final page of the book, the whodunit is over, but the wheredtheyputit has just begun. That’s where adventurous readers like Holmes come in. Like most armchair treasure hunters discussing the treasure’s possible whereabouts in online forums, Holmes has been studying the book for clues since receiving it from preorder. "I’ve got another pretty good suspicion as to where one of them is," Holmes says. He may travel as far as Idaho for a dig.

"We definitely like the idea of people getting out of the house and getting their hands dirty," says "Clock" co-author Eli Horowitz. "Though I’m a little nervous that misguided expeditioners will accidentally exhume old grandmothers."

Not every hunter is making the journey to find treasure. Some seem content to strenuously debate the book’s riddles on the Internet, never leaving the comfort of their armchairs. Kevin Hemenway, a.k.a. Morbus Iff, set up an extensive wiki dedicated to a chapter-by-chapter analysis of possible clues. Iff declined a phone interview -- "I’m not a big fan of the human voice ;)" -- but wrote in an email that he has no plans to go on a dig personally. "I don’t travel much," he said. "I’m in it just to puzzle solve, and tell other people where they might dig." Some message board posters have offered to crew for others’ digs. “If you’re not the diggin type," Domino writes at tweleve.org, "just keep me in mind. … Hunt Happily!"

While Horowitz won’t confirm or refute any current theories, he insists the treasure is very much within reach. He guesses the first number will be found within weeks, and all of them within months. "This is not an endurance test," he says. "I have no hope for a 'Masquerade' situation."

Horowitz is referring to perhaps the most famous exemplar of the armchair treasure hunt genre, Kit Williams’s "Masquerade" (1979), which he openly cites as inspiration for "Clock." "Masquerade" left clues in sixteen paintings to the whereabouts of a golden hare, buried somewhere in Britain. The book became a worldwide sensation, selling hundreds of thousands of copies and prompting a years-long hunt. When the hare was found by somebody with personal ties to Williams, the book was mired in a public scandal. In the wake of "Masquerade’s" success, publishers brought out a slew of armchair treasure hunts in the early 1980s.

"Clock" is hoping to reinvigorate the genre. The book’s authors run a website with animated details of the illustrations and links to ongoing online discussions. Gus Twintig has a Twitter feed. The authors have said they’ll post clues at these locations—as well as on a countrywide book tour that includes onstage "digging competitions"—but say you don’t need a DSL connection to solve the case.

"We wanted to make a book that can be enjoyed in all sorts of different ways for each different reader," Horowitz says. "You can read it just as whodunit, or you can display it as an art object, or you can study the drawings, crack the puzzles, and locate the emeralds. All the answers are right there in the drawings."

For many armchair treasure hunters like Holmes, born in the 1980s, "Clock" represents their first chance to journey into the treasure-hunting world. "All those books were written before I was born," Holmes says. "I was really excited when this was coming out because you can get in on the ground floor."

On last Wednesday’s hunt, Holmes visited an abandoned construction site and "a scummy pond" along a highway. Based on the donut illustrations, he went to more than one Dunkin Donuts, where his queries about cursed, buried treasure were met with laughter. He did a little digging—in a conspicuous mound of gravel in the middle of a public flowerbed—but came up empty-handed.

"I really did expect to find something," he says. Still, he remains undeterred. "I wouldn’t say I was particularly sad at the end of the day. It’s enjoyable to wake up and say, 'Oh we’re getting a shovel and digging for treasure today.'"