Freed from the Republican Party, he has a chance to reassess the way he sees the world -- and himself 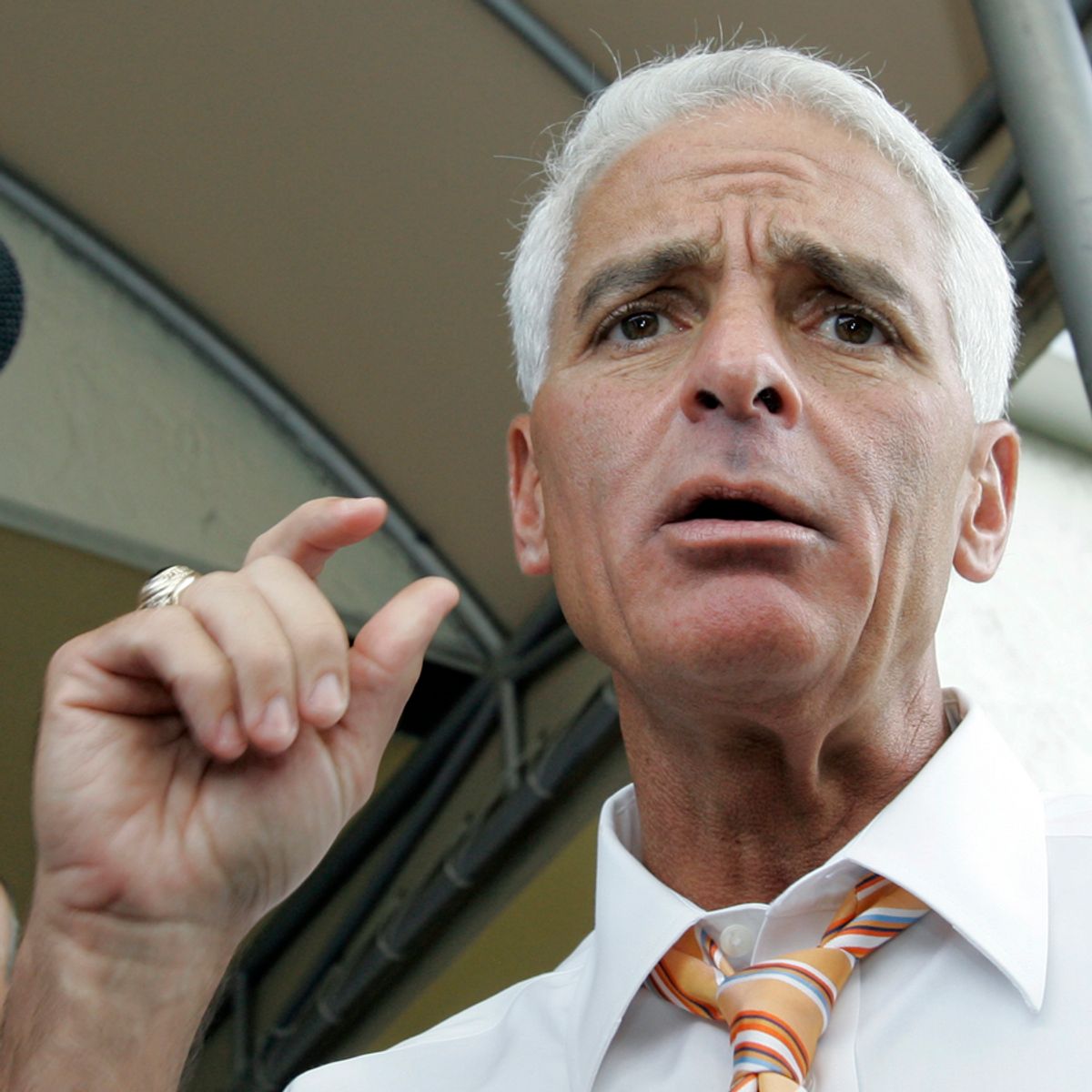 Once the fair-haired boy of the Republican Party, Charlie Crist is suddenly running as an independent in Florida's U.S. Senate race. Crist's decision was based on recent polls showing that a break with Republicans offered him his only shot at victory. But he's still in an almost impossible position, without any major GOP backing and with Democrats likely to shy away from him for fear of hurting their own candidate, Kendrick Meek.

Dick Cheney recently turned off the life support on Crist's campaign by endorsing Marco Rubio, the conservative Cuban-American (and Jeb Bush protégé) who -- at least until Thursday -- was Crist's GOP primary opponent. Rudy Giuliani joined the pile-on. Only former presidential standard bearer John McCain -- falling fast in polls for his own Senate race in Arizona -- stayed on Crist's sinking ship. And now even McCain has rejected Crist, saying he only supports Republicans.

One wonders why Crist ever became a Republican in the first place. He's always been more flexible, less shrill and more compromising than most in the GOP. Crist opposes offshore drilling, has expanded Florida's health coverage for the poor, and was the first Florida governor to accept an invitation to the Florida NAACP's annual meeting -- some even called him "Florida's first black governor." With Barack Obama running strong at the start of his presidency, Crist threw caution to the wind and literally embraced the Democratic president. (Crist also praised and accepted huge amounts of Obama's stimulus money for his financially devastated Florida.)

But the governor is no liberal. He supports abortion restrictions, encourages easy access to guns, and opposes any changes to the "Don't ask, don't tell" regulation for gays in the military. And he opposed gay marriage (although he has said that Republicans should focus their energy on other issues).

The endless speculation that Crist himself might be gay may be another reason he never really settled into a lofty perch in the GOP. The rumors have been around for years and have only grown louder as Crist's presence on the political stage has increased, with last year's release of "Outrage," a documentary film that explored the Crist chatter in detail, further stoking speculation.

Crist's camp has ignored these matters, as has most of the mainstream media. So a cloud lingers and raises questions -- not about Crist's orientation but about his "honesty," or that of any candidate suspected of living a double life. Maybe he is gay, and maybe he isn't. If he is, this might be a good moment for him to look around and realize how much the world has changed since he entered politics.

Polls show most voters, appropriately, care little about a candidate's sexuality. Like me, they support the full participation of qualified gay and lesbian citizens in government -- or in any field they choose. Most voters also support gays serving openly in the military, and a growing number support marriage equality. Many are also saddened by the closeted lives gay individuals often feel they must lead.

Of course, there is far less support for gay rights in the narrow world of Republican politics -- Charlie Crist's world, at least until this week. So now that he's running outside of the Republican tent, might he try to clear up the rumors that continue to dog him and maybe even clarify his position on gay rights issues?

Members of Congress like Barney Frank, D-Mass., Jared Polis, D-Colo., and Tammy Baldwin, D-Wis., have proven that openly gay candidates can be elected. At the more competitive statewide level, there's never been an openly gay candidate elected to the U.S. Senate (although there's certainly been plenty of suspicion about some senators, like Larry Craig). Meanwhile, serially unfaithful spouses and fathers like Bill Clinton and Rudy Giuliani routinely advance to "statesman" status despite their libertine ways.

In an ideal world, of course, both parties' tents would be large enough to welcome those stuck in the closet, or those who have humanly stumbled on the heterosexual road of marital fidelity -- both as party members and elected leaders. (In Europe, for example, the sexual issues that paralyze many U.S. politicians and military leaders are considered irrelevant.)

Otherwise, we'll just have to wait for America's political system to mature enough to accept the reality of consensual sex between adults of any gender. Then, the painful dilemma forced on worthy candidates might simply go away.

Mary Ann Sorrentino, author of "Abortion: The A-Word," writes for Salon each Friday. Her e-mail is thatmaryann@yahoo.com.