No one likes a nasty cook 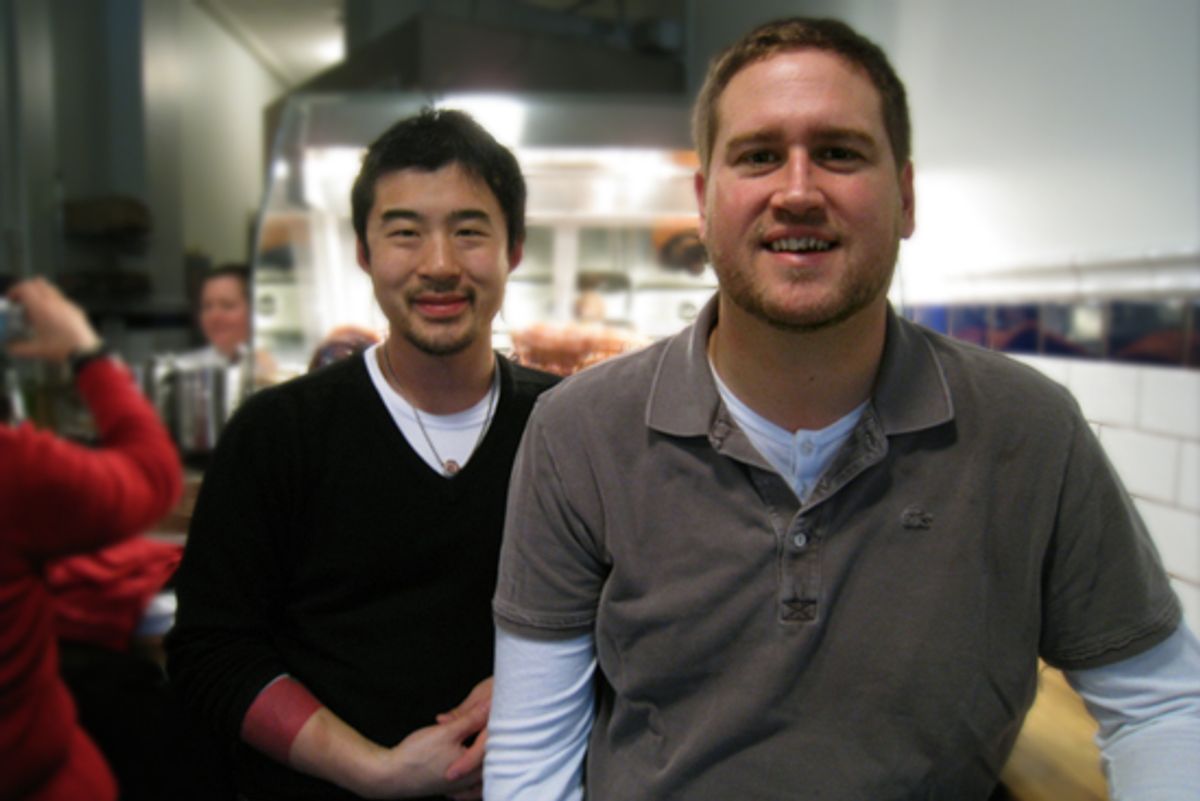 I hated Chuck the first time I laid eyes on him. The moment he walked into geology class, I hated him for his stupid dyed black hair and his dopey glasses and his punk rock patches safety-pinned to his ripped hoodie. "Look at this fucking alterna-teen," I thought, back before we had the word "hipster" to sneer under our breaths. (I'm even less proud of the next thought: "And why is that hot girl talking to him?")

I recall this every once in a while because the irony of that moment is never lost. Not last weekend, when I held his son for the first time. Not when there was a minor imbroglio among our friends over who would be asked to stand up at his wedding. Not when we decided to drop everything in our lives and go to culinary school together. Not when, just a couple of years after I called him an alterna-teen, we became best friends in the kitchen of the college house we shared with 8 other people.

I'd graduated early, and when my housemates were heading off to class, I'd stumble down to our cracked linoleum kitchen straight from bed, a head full of things I saw on the Food Network the night before, and start chopping peppers and onions for a sauce at 9 am. Sometimes I would remember to brush my teeth and shower before cooking, but mostly it was me in my bedhead and the stove -- I was just learning to cook after a lifetime of enthusiastic eating, and the thrill of actually making food -- good food -- powered me through weeks and months and stacks of filthy dishes.

But that thrill turned into an intensity, the weird kind of internal competitiveness you develop when you feel yourself committing to something, and I started to feel like the kitchen was my place. It bugged me when other people were there, bouncing around each other, chatting, listening to music: you know, doing what you should to be doing in a kitchen. I was, basically, an asshole. God help you if you were standing between me and the sink when my pasta was done cooking. "Perfectly cooked pasta has a two-second window to get out of the water," I'd growl viciously, pot in hand and bulldozing through some of my best friends towards the colander. (It doesn't help my shame to know now that I was wrong about the pasta, too.)

But one day I was cooking that pasta, and Chuck ambled in to talk with me about an important matter.

"She's kind of crappy. She has a gnarly attitude. But I'm kind of into it," he said, pulling up a chair.

"I dunno, dude," I said. I am always ready to talk romantic gossip, but I eyed my pasta nervously. "I mean, like, you know..." I babbled. The spaghetti bubbled up with the water, tender and curling.

"Well, it's just that she keeps telling me she wants to hang out..."

"She invited me to a monster truck rally..."

"And when we were studying once, she kept making eye contact with me and spreading her legs."

I forgot about the pasta. I pressed for clarification, insinuation, implication, ramification. "That's hot, dude," I said. Hot ... Heat ... Bubble.

"Oh shit!" I grabbed the pasta pot and expected to have to jump over Chuck. Which is very hard, because he is very tall, and because the pot was very hot and very deadly, but my spaghetti was on the verge of being very fucked up.

But then, before I even had the pot in hand, Chuck stood up, pulled his chair aside, and in one motion grabbed the colander off its hook and placed it perfectly over the sink drain. "Yeah," he said, "I'm pretty sure she wants to make it Sinful Summer '98."

I was stunned. Collegiate sex stories you can get anywhere, but a friend who knows instinctively how to save your dinner is something else entirely.

We started hanging out in the kitchen, talking about girls (monster truck girl turned out to be crappy), listening to rock and roll, and cooking. Chuck got a job at a restaurant and came home with tips on how to cut, how to use a knife, how to keep spinach bright green. He'd watch me cook from my Food Network dreams in the morning and try his own version at night. We bought expensive fish and cooked for friends -- friends who hung out in the kitchen with us when we cooked, friends who could hang out in the kitchen because Chuck taught me to be calm, to cook with purpose and good attitude.

It didn't even matter to me that Chuck's food was always better than mine, that he always cooked it so much faster and cleaner. His cooking always had a casual grace; the food was great, and even when it wasn't, it was never a big deal. His is a cooking of confidence.

Years later, we would go to culinary school together, where my cooking was good enough for me to get hired to write stories about cooks, and Chuck's was so good he got hired to write The Best Recipes for Cook's Illustrated.

I went up to Boston last weekend to visit him. It was the kind of visit filled with the happiness of seeing your favorite people, but tinged with the knowing that you're still just visiting, not living in the daily sphere of each others' lives. It's been almost a year since we've seen each other, but what a year: he's got two babies -- a beautiful nine-month-old boy, and a beautiful two-month-old sandwich shop. He's lost weight, he barely sleeps, and when he does, he wakes up in the middle of the night with anxieties about the roast beef.

I was worried for him, for all the stress of double fatherhood. But I loved little Henry the first time I laid eyes on him, and I loved Cutty's the first time I laid eyes on it. The food, of course, is fantastic. The place is down the street from the Cooks' Illustrated offices, and his former co-workers come in every day for lunch even though they have 40 examples of perfectly pan-roasted chicken breasts sitting in their own kitchen. I spent the day, proud and happy, in the shop, tasting good bites all day long.

At one point, two of his cooks flubbed an order, and got into it, playfully, about whose fault it was. Chuck heard the commotion, and barked: "Hey!" We all stood to.

"I got ONE RULE in this kitchen," he said. I wondered, in that moment, how much the stress was getting to him.

We stared at him.

"Everybody love everybody," he said, and smiled.