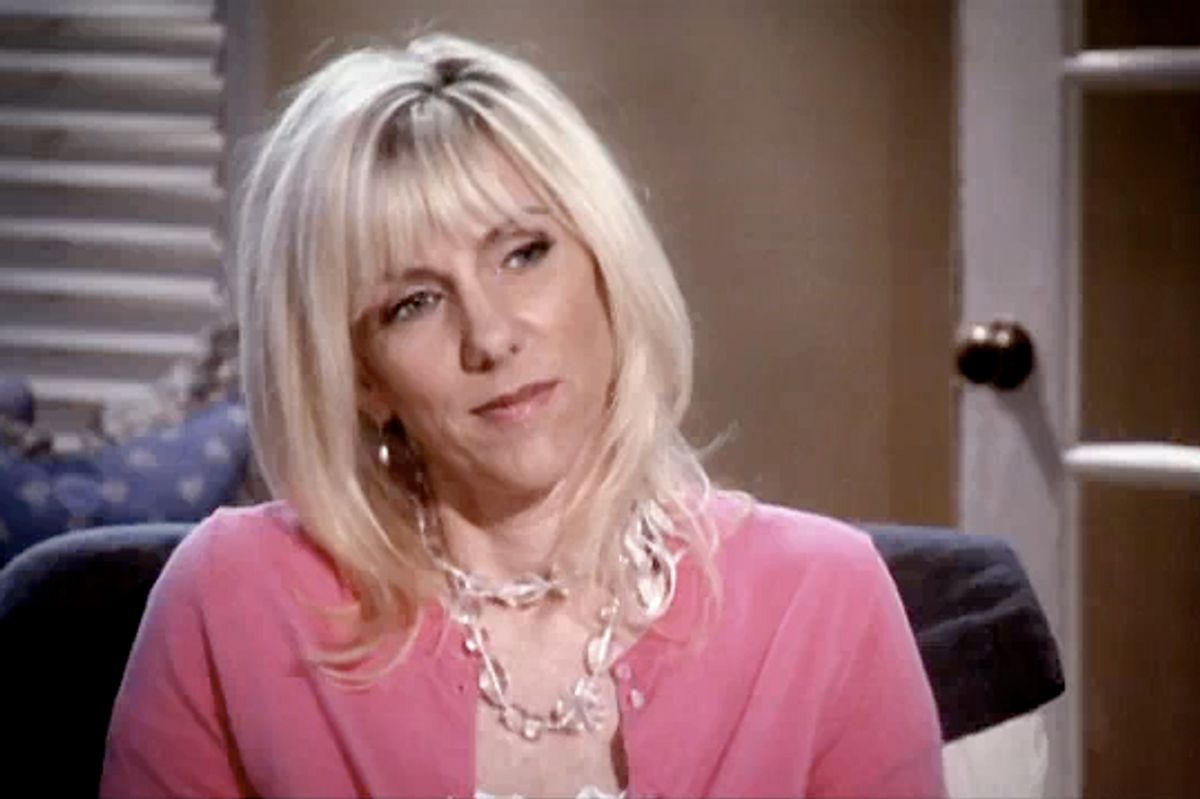 When Oprah Winfrey begins one of her hour-long interviews with a question like, "Is it true that no one in your life thinks it's a good idea for you to be talking to me?" it is often an auspicious sign that an audience should buckle its seat belts and get ready for a bumpy hour. But in the case of Winfrey's Thursday interview with Rielle Hunter, the mistress of John Edwards and mother of his fifth child, the opening question should have served as fair warning:

Nothing about Rielle Hunter's decision to sit down with Winfrey on Thursday was a good idea.

Hunter repeatedly claimed that she was doing this to correct a flawed public record about herself. And I can see it, can stretch far enough into the heart-wants-what-the-heart-wants school of domestic complexity to consider that during this turgid scandal, in which Hunter carried on an affair with Edwards while his wife was battling cancer and he was running for president, Hunter might have gotten the fuzzy end of the press's lollipop, that the enforced silence might have left her misrepresented as the heat-seeking, home-wrecking strumpet of our pulp fictive fantasies.

In fact, while it's possible that before Hunter started speaking on her own behalf, I might have entertained the notion that she was a slightly dopey lady who fell hard for a bad man who was running for president and got caught in a very unfortunate saga, I now feel quite confident that in fact she is a borderline simpleton, fame-seeking narcissist whose self-interested grab for attention is likely doing further permanent damage to the Edwards family, including her daughter and her siblings. If her appearance on the Oprah show seemed like an unjust setup, then Hunter proved that, every once in a while, someone so amply meets all expectations for awfulness that it's impossible to muster anything other than loathing for them.

"Here's the thing about why this whole journey has been so hard for me," Hunter said during the interview, straining the bounds of any generous impulse toward her. "Because I've been a very private person with my personal life." And because in the version of the story that has been told about her, the "facts are incorrect ... That bothers me because I am very much a person committed to truth."

But everything Hunter said to Oprah seemed to corroborate the facts as they have been doled out to us over the years since Edwards' transgression, by everyone from the National Enquirer to "Game Change" authors Mark Halperin and John Heilemann to Elizabeth Edwards speaking to Winfrey last year to Hunter herself in GQ: She met him at the Regency Hotel bar in New York; she introduced herself to him by telling him he was "so hot"; she instinctively knew his birth name was "Johnny" and couldn't bring herself to call him anything but (including, irritatingly, to Winfrey); he renewed his wedding vows with Elizabeth after he knew Hunter was pregnant; he and his aide Andrew Young cooked up a false story in which Young claimed paternity; he lied on national television about paternity; they made a sex tape which she, the videographer, didn't manage to properly destroy.

Hunter's excuses and clarifications of her own behavior did not contradict, but rather bolstered the widely held perceptions that she was a new-age dingbat who covered her morally fraught decisions with wavy-gravy rationalizations. Hunter told Winfrey that she doesn't consider herself a home-wrecker because "it's not my experience that a third party wrecks a home." She didn't recognize Edwards because she "had a lot going on at the time" of the 2004 presidential election and apparently hadn't noticed who was running for vice-president. Hunter claimed that despite their googly-eyed hotel bar "connection," she didn't intend to come on to him when she told he his was "so hot," or when she went to his hotel room that night; instead, she said, her intention was to "help him see his authentic self" and that they talked for a long time about how "he wanted to live a life of truth."

A note to Hunter, or whoever coaches her for this stuff: Cut the "life of truth" line. Seriously, it doesn't work when you're talking about sleeping with a man whose wife was dying. It doesn't work when you're describing your choice to have a child with a man who was lying in person and on television to his spouse, his children, his staff, his colleagues and his country. You would be far more persuasive if you said, "Yeah, he's a total weasel, but we had a good time together and I really liked him."

So disingenuous were Hunter's claims to truth-seeking and the rewards of integrated and transparent living (or whatever) that even Oprah -- not exactly allergic to the squishy language of self-improvement -- looked like she'd like to take Hunter and force her to do logic puzzles or read a non-astrological book or listen to a recording of how idiotic she sounded until something in that brain of hers clicked into place. In fact, in several instances, Winfrey repeated Hunter's words back to her, perhaps willing her to hear how foolish they sounded.

Responding to how she reconciled her commitment to truth with living the lie of an extramarital affair, Hunter said, "What's so hard about it is that the power of the love does override all the issues that come up and all the judgments.'" Winfrey just repeated, "The power of the love did that. OK." A few minutes later, Hunter averred that, "Our hearts were louder than the minds." Winfrey again reiterated, with what sounded like incredulity, "OK. The hearts were louder than the minds."

Rarely have I seem Winfrey so openly disdainful of one of her guests. But on Thursday, she cut into Hunter again and again; asking about the decision to allow Young to pose as the baby's father, Winfrey said, "Why did you, Miss Spirituality, in alignment with the truth, go along with it?" When Hunter told Winfrey that she hadn't thought Edwards should be president because "I think you need to get all your ducks in a row and live a life of integrity before you step out in public," Winfrey called her to the carpet, saying, "You're talking about integrity ... that is a big contradiction, wouldn't you say? ... Would you agree you were out of alignment, you were in contradiction?" Perhaps the most devastating exchange came when Winfrey questioned Hunter about her choice to pose half-clothed among her daughter's toys for a photo spread that accompanied her GQ interview. "Not to sound like Dr. Phil," said Winfrey, "but what were you thinking?" She paused and then anticipated Hunter's victim-of-prurient-circumstance response by noting, "Because you actually have to take your pants off" in order to be photographed pants-less. Hunter replied that she had just wanted what any shunned Hester Prynne might want: "one sexy shot where the world can see me as a beautiful woman" (without pants). Winfrey then asked, almost meanly, "What did 'Johnny' think about those photos?"

Johnny, of course, was at the heart of what was most unsettling about the interview. For in the midst of the various ways in which Hunter made herself achingly unsympathetic, one couldn't help feeling a minuscule tug of anxiety for her and her willful blindness toward the simply stomach-turning qualities of the mate she has apparently chosen. At one point Oprah asked Hunter, given that Edwards had "denied you, denied your child on national television, point blank, what makes you think he's not lying to you?" But Hunter maintained, "He has been honest with me since our first meeting ... He disclosed everything in his life."

Despite her account that she only agreed to have Young claim public paternity because she didn't want to burden her daughter with the connection of her birth to a scandal that prevented Daddy from being president (best of luck with that), Hunter managed to blame Elizabeth for Edwards' terrible interview with Bob Woodruff in which he denied his daughter's existence and identity. "He was trying to fix what had been broken," Hunter explained.

When Oprah asked how she felt about Edwards' renewing his marriage vows while she was pregnant with his child, Hunter said she didn't judge him because "I understood where he was in his process." She also allowed as how, when she revealed to him that she was pregnant, after a relationship during which she claimed they both knew she was not using birth control, "I wouldn't say [he was] fully supportive" but emphasized that "he was very gracious," which kind of reminded me of a line from "Thelma and Louise" in which someone says of Thelma's loutish husband: "He's a real gentleman! I bet he takes the dishes out of the sink before he pees in it!"*

When Winfrey asked Hunter, "What do you want people to really understand about what has happened here?" Hunter responded that she wanted people to understand that "all of their feelings that they are feeling [have] ... to do with their fears or their anger and disappointment and sadness about their mother cheating on their father, or their father, or their husband or their spouses ... it has to do with them and it doesn’t have to do with me, because they don’t know me."

Here is what I know about my feelings on this matter: They don't have to do with my mother, my father, or my spouse. They don't have to do with my fears or my anger or my sadness. They have to do with the fact that Rielle Hunter's involvement with a man I had planned to vote for revealed to me the wrongness of my own instincts, and the very real chance that we could have handed the Democratic Party's future over to a congenital liar and charlatan. While I understand love and desire to be viciously complicated things, and certainly do not believe all mistresses to be craven, self-absorbed or ill-intentioned, I believe Rielle Hunter to be all of those things. It has been her willingness to speak out for herself that has ensured that I never think otherwise.

*Commenters point out that this line is from "Steel Magnolias." They are correct. But it still reminds me of "Thelma & Louise."