We argue over whether he shifted left or the court moved right, but the important thing is that he stayed modest 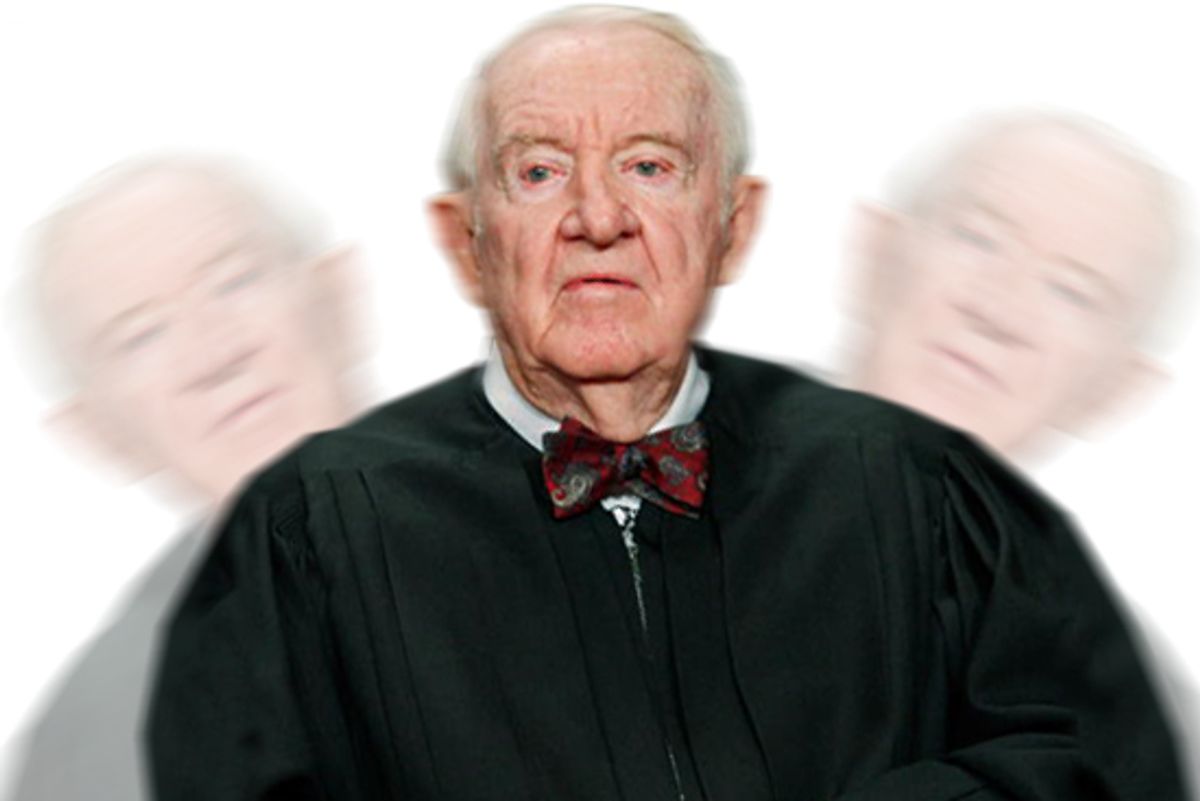 Did Justice Stevens change? That is a question on which many have proffered an opinion, from admirers to critics, professors to pundits, law clerks to the justice himself.

The debate has focused largely on outcomes and -- more to the point -- what those outcomes say about ideology.

The prevailing narrative is that Stevens has moved left. He began his career on the Court as a "moderate" and "maverick," but ended as a "liberal lion" and "leader" of the Court's left wing. Data points include, on the one hand, Stevens' increasing skepticism toward the death penalty, and on the other hand, his eventual embrace of affirmative action.

The dissenting narrative -- fittingly enough -- is advanced most prominently by Stevens. "I don’t really think I’ve changed all that much," he said in a recent interview. Instead, according to Stevens, the Court changed around him, leapfrogging over itself to the right. He likes to observe that nearly all of the justices appointed from Nixon onward have been more conservative than their predecessors, with the possible exceptions of Ginsburg (who replaced White) and Sotomayor (who replaced Souter).

An emerging view gives weight to both sides. While Stevens leaned left, the Court lurched right. This may be the most balanced perspective.

Yet in a critical sense, all of these assessments miss the point.

Of course, if the aim of evaluating a justice's evolution is to tally history's political winners and losers -- did the appointee meet or betray expectations? -- then the foregoing views are not uninformative. And, it is fair to say, the results are split. While Stevens did not disappoint the moderate Republican who appointed him in 1975, the same cannot be said for more conservative party members today.

But if the aim of measuring a justice's evolution is to assess his imprint on the law or the institution of the Court, then a better metric for Stevens may be judicial methodology rather than ideological outcomes. For with Stevens, the method largely defined the man. His approach to deciding cases shaped -- if not dictated -- the conclusions he reached. And during his decades on the bench, Stevens' approach did not change.

Stevens generally decided cases by a common law process of case-by-case analysis. He considered every relevant factual wrinkle and legal argument, and as much as possible, constrained the scope of his decisions to those case-specific considerations. Out of principle as well as pragmatism, Stevens left room for future judges to consider unforeseen facts and unintended consequences, and for other appropriate decision-makers to make decisions.

I witnessed Stevens taking this approach in case after case during my clerkship from 2000 to 2001. Because of his sensitivity to facts, his openness to opposing arguments, and his desire to avoid unnecessary decisions, it turned out to be fun but incredibly difficult to predict what Stevens would conclude about any particular case. Three that come to mind among the dozens from that horizontal cross-section of Stevens’ career are Kyllo v. United States, PGA Tour, Inc. v. Martin, and Bush v. Gore.

Kyllo involved a thermal camera that took crude infrared images showing some external surfaces of a home to be warmer than surrounding areas. Justice Scalia’s opinion for the Court did not dwell on the rudimentary abilities of the device at issue. Instead, it took "the long view" and created a categorical rule that swept sense-enhancing technologies -- including ones not yet-developed -- under the Fourth Amendment. By contrast, Stevens’ dissent disputed the need to apply the Constitution to a particular device that could not see through walls to disclose private information. He questioned the wisdom of "crafting an all-encompassing rule for the future" that would "shackle [legislators] with prematurely devised constitutional constraints."

PGA Tour concerned the application of the Americans with Disabilities Act to Casey Martin’s request to use a cart during professional golf tournaments. Stevens' majority opinion held that the PGA had to dispense with its no-cart rule as a reasonable accommodation to Martin. The highly detailed opinion tied that holding to the peripheral nature of the rule in question and the personal characteristics of Martin's severe disability, which more than compensated for the rule's purpose of inducing fatigue. As a result, the dissent’s dire predictions that the decision would upend sports by compelling a cascade of accommodations -- from carts for other golfers to fourth strikes for little leaguers -- never came to pass. The fact-specific analysis supporting the narrow holding did not guarantee success for any future claimant. Rather, it ensured that each case would be judged individually, and rigorously, by the interplay of the particular rule and personal disability.

As in Kyllo and PGA Tour, Stevens’ analysis in Bush v. Gore proceeded from the bottom up. On the ground level, the case involved a recount of votes overseen by state court judges applying a state law standard, with nothing in the record to suggest that those judges lacked the capacity or impartiality to fulfill their legal role in the electoral process. Stevens thus saw no substantial federal basis for the Court to step into, much less stop, the recount. The majority's top-down imposition of the one-person-one-vote principle simply did not fit the facts on the ground as Stevens found them, leading him to conclude that the majority's unstated lack of trust in the state judges supervising the recount "can only lend credence to the most cynical appraisal of the work of judges throughout the land."

A vertical cross-section of Stevens' opinions reveals the same preference for narrow decisions based on unique factual and legal considerations rather than ideological ones. It also discloses key instances of deference to decision-makers with better authority or expertise. Chevron v. Natural Resources Defense Council exemplifies this approach. If Congress left statutory gaps for administrative agencies to fill, then less knowledgeable and less accountable judges need not -- and therefore should not -- second guess their reasonable legal interpretations.

Even Stevens' war-on-terror opinions decided less than their landmark status would suggest. While Rasul v. Bush construed the statutory privilege of habeas corpus to extend to Guantanamo Bay, Cuba, its consideration of the peculiar history and sovereignty of the territory left open the applicability of the privilege elsewhere in the world. While Hamdan v. Rumsfeld invalidated military commissions at Guantanamo Bay, its focus on the shortcomings of the particular tribunals at issue left the Executive and Congress free to establish others in compliance with federal law.

Stevens' careful, incremental approach to deciding cases is not new. It follows a venerable tradition practiced by the likes of Holmes, Brandeis, and Cardozo. With the hindsight of history, Stevens will likely be added to that list of great common law judges. Furthermore, Stevens' emphasis on deferring to more qualified decision-makers adds his own imprint to this tradition of judicial restraint. He leaves a legacy of small steps and deferred decisions that may be less visible, but is no less valuable, than the outcomes of landmark cases that he could not avoid deciding.

With Stevens' retirement, one wonders when the Court will again favor this old form of judicial conservatism. Recent years have seen the rise of an entirely opposite approach to restraining the discretion of judges -- the adoption of broad and bright rules favored by ideological conservatives like Scalia. In cases such as Citizens United v. Federal Election Commission, the Court decided a lot, and thereby left little for other judges and legislators to decide.

By contrast, from the beginning to the end of his judicial career, Stevens placed greater faith in the judgment of time and experience than his own judgment. Because he left difficult decisions for future consideration -- and reconsideration -- whenever possible, it should come as no surprise that, over the course of decades, Stevens occasionally changed his views.

Given his consistently humble approach to judging, the more Justice Stevens changed, the more he stayed the same.