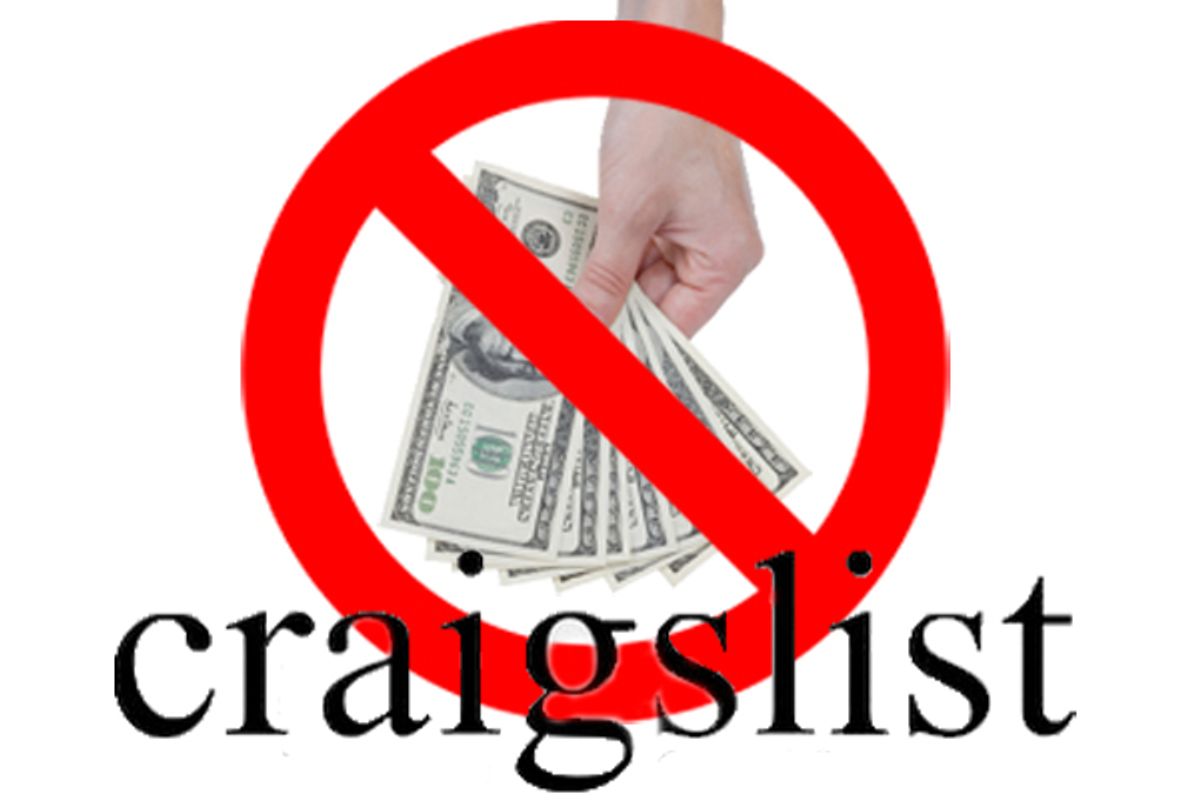 When news broke earlier this week that paid advertisements in Craigslist's "adult services" section were expected to produce revenue of $36 million this year, it raised questions about where all that money is going. After all, the adult section isn't just used as a venue for legal adult fun but also prostitution and even sex trafficking. But if the classified site were to commit to donating 100 percent of the proceeds from adult ads to charity, as it did until recently, Craigslist wouldn't be profiting from the illegal sex trade and would be helping to fund organizations that fight trafficking. Then we could all get back to searching for jobs, apartments and used furniture without any moral conflict, right?

But organizations that fight trafficking and provide support for exploited girls and women say it isn't so simple. In fact, they say they would refuse to accept donations from Craigslist. Earlier this week, the company's chief executive, Jim Buckmaster, explained that Craigslist's charitable organization would focus on a number of causes, including human trafficking. However, Rachel Lloyd, executive director of Girls Educational and Mentoring Services, told the New York Times that her organization would refuse charitable donations from Craigslist since "that money has come from pimps and traffickers who have sold many of the girls who will then walk in my door."

This struck me as an interesting dilemma, so I called Sonia Ossorio, executive director of the National Organization for Women's New York office. "I don't find it interesting at all," she said matter-of-factly. "It's pretty black and white. For those of us ... waging the war with traffickers, it's just logical that we wouldn't be accepting money from the many businesses that profit directly from women's suffering." It isn't just Craigslist, she says, but newspapers, magazines and scores of websites that function as the "marketing arm of traffickers" through classified ads.

Yasmeen Hassan, programs director at Equality Now, agreed: "We don't consider this a dilemma," she said. "Why would we want to use profits from the sex trade to advocate against the sex trade? If Craigslist was serious about this, they would stop profiting from the advertisements." Andrea Powell, co-director of FAIR Fund, a nonprofit dedicated to fighting human trafficking and sexual violence, was more measured: "If Craigslist offered us a donation, my response would be, 'Let's have a conversation about developing a good corporate responsibility model, and then we can talk about a financial contribution that could help benefit the girls that your ads, frankly, help victimize.'" However, she added: "On a very core level, my gut reaction is to say no."

Activists say that no amount of charitable donations can make up for the sexual exploitation that takes place on the site. Once thought of as a liberal, "well-intentioned" community hub, Craigslist has been "degraded into being a partner for the lurid sex trade where young girls and vulnerable women are used," says Ossorio. She compares it to selling drugs: "Once you decide to push some pills, the money is too captivating and you can't get out."