It wasn't meant to be the star of this shop's menu, but its charms will not be denied. A recipe, of sorts 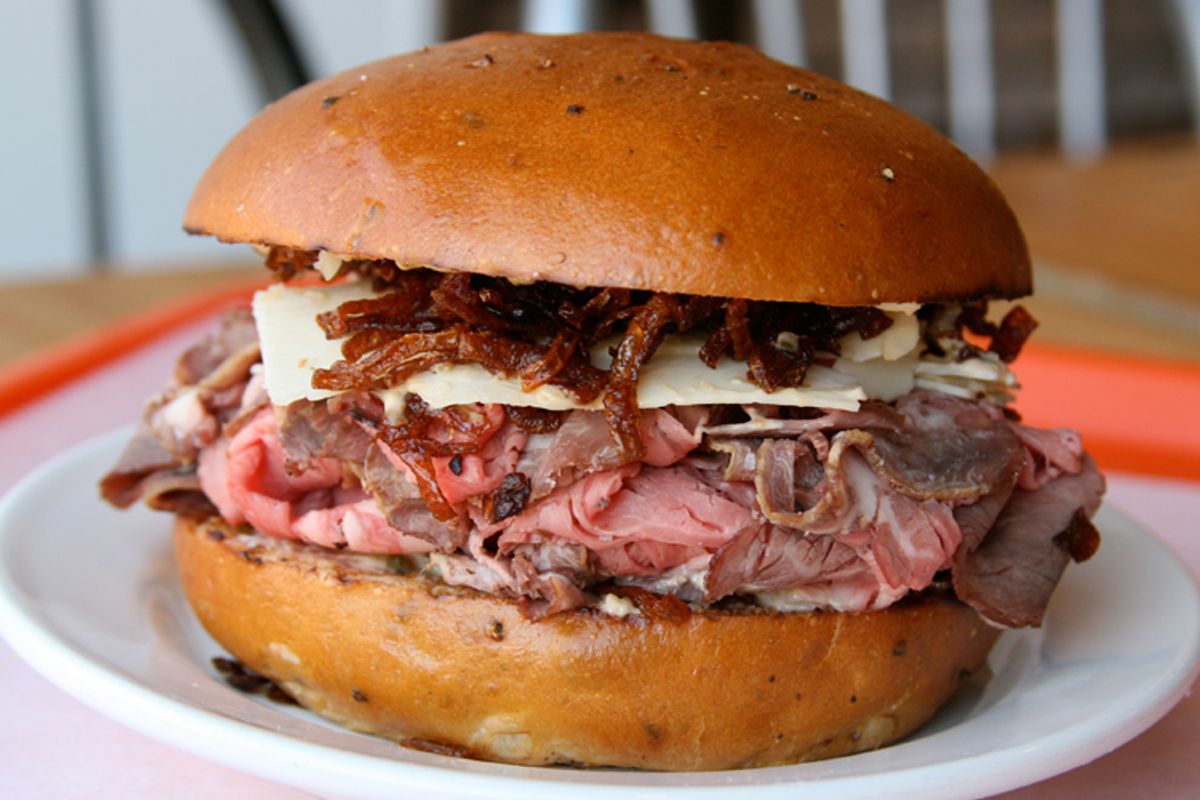 My friend Chuck didn't set out to make the World's Greatest Roast Beef Sandwich, but it's not for lack of ambition. Ambition he has by the kilo. When he first started telling me about Cutty's, his newborn sandwich shop, he said, "Listen. I'm going to create the iconic sandwich of Boston. It's going to be awesome. Italian cold cuts, mozzarella I'm making myself, and this olive salad that's just pure goodness. I want people eating this stuff at Fenway. When people think of Boston, I want them to think of Cutty's spuckie sandwich."

"When I think of Boston, I think of angry drivers and angrier sports fans," I said. I'm from New York. I can't help it.

But who knew the spuckie's biggest challenge to iconic status would not be coming from provincial rubes like myself, but from his own kitchen? Because despite the excellence of the spuckie, its path to dominance is thwarted by the utter amazingness of Chuck's roast beef sandwich.

"I can't believe how much roast beef I sell," Chuck said. "I mean, it's just a roast beef sandwich. Why do people love it so much?" A friend of mine from Seattle, who happened to visit Boston and be taken to Cutty's, raved to me about it. For three days. When I was there last week, it looked at one point like everyone in the shop had one in their hands and one to take home. I puzzled at the sight of a man hunching over weirdly at the wall, until I saw that he was writing on it: "I came all the way from Worcester to have the roast beef again!" I drove past Worcester on the way here. It's an hour away.

What inspires such devotion? Well, the beef, first of all, is magic -- tender with a flavor of supreme beefiness, the result of salt-rubbing it overnight before roasting it. Thousand Island is always a pleasure, sharp cheddar gives it a rich tang, and the buttery, soft brioche bun lets the whole thing go down nice and easy. But the key is the fried shallot chips, caramel-sweet with a beguiling, mellow onioniness. They give crackle to every bite. "Dude," I said with dressing on my lips and crumbs falling from my mouth. "This is incredible. How do you not understand the people's love for it?"

Chuck took a bite. He chewed. "I never eat this," he said. "After I made it up, I just taste each component as I make it to make sure it's right, but I never think to actually eat them together."

A few days later, he asked a friend to take a photo of the roast beef for me, the one you see above. "Oh," he e-mailed me. "And I ate the fuck out of that sandwich afterwards, too."

The bread: Cutty's uses a black pepper brioche roll, but any good-quality soft roll will work. Toast it. And if it's not brioche, toast and lightly butter it. The size is important here; a 4-inch diameter will let the meat mound up nicely. (But sometimes things aren't perfect. "It's artisan, handmade bread," Chuck says. "That's what they'll tell you when they fuck up the shape of the bread.")

Crispy shallots: You can buy these at Southeast Asian grocery stores, but they're fresher and livelier when you make them. And if you're going to bother to make them, make a bunch; they freeze well and are delicious sprinkled on nearly anything. Eight large shallots will give you about ½ cup fried, enough for about 6 sandwiches. But you might eat half of them before the sandwiches are ready.

Roast Beef: Cutty's uses great quality beef, but a relatively inexpensive cut: the chuck eye roll. It's traditionally more often used for stewing and braising, but when you salt it overnight, slice it very thin, and slow-roast it, the toughness disappears and you have incredibly beefy-tasting meat. (These instructions assume a roughly 5-pound roast, tied for even shape. Ask the butcher to tie it for you, and cooking times are always approximate anyway -- use a meat thermometer and keep an eye on the oven.)

Assemble the sandwich: Dress the toasted bun on both sides. Add ¼ pound of beef, a slice of cheese, and a nice sprinkle of shallots.