Why is the Fed so opposed to being audited, and what does it have to hide? 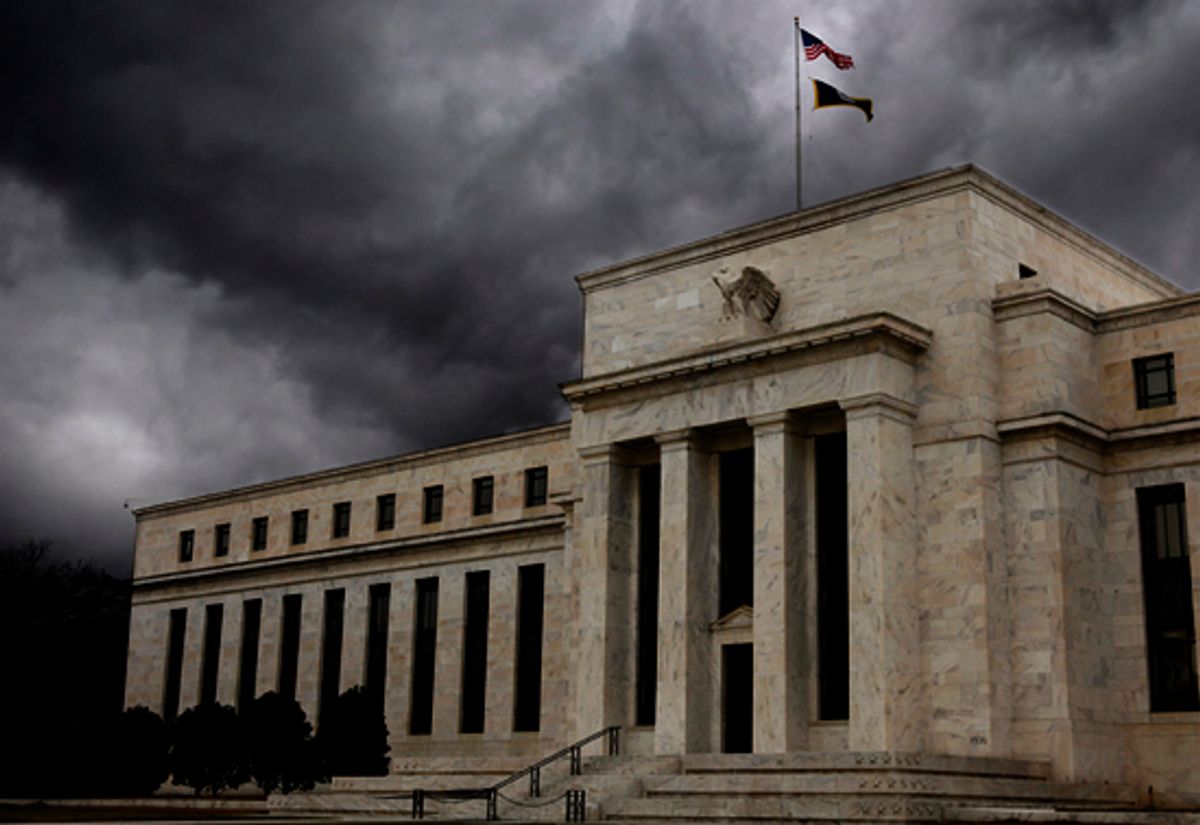 The U.S. Federal Reserve Building is pictured in Washington, January 26, 2010. The U.S. Federal Reserve's Federal Open Market Committee began its two-day rate-setting meeting Tuesday, and while no change in interest rate conditions is expected, there is still plenty for investors to watch and worry about as the Senate debates Chairman Ben Bernanke's nomination for a second term as Fed chairman. REUTERS/Jason Reed (UNITED STATES - Tags: BUSINESS) (Â© Jason Reed / Reuters)
--

Commercial banks, by law, have to hold a certain percentage of their deposits as cash at the Federal Reserve. From January 1959 until August 2008, the total of these reserves held by the commercial banks at the Fed grew from $11.1 billion to $46.2 billion. At no time during this almost 50-year period did the total bank reserves held at the Fed exceed the minimum required by law by more than $2 billion.

But since August 2008, these bank reserves held at the Fed have exploded to more than $1.2 trillion (as of March 2010), even though only $65.6 billion was required to be deposited by law.

This increase in excess reserves resulted directly from the Fed's policy of dramatically increasing the quantity (and lowering the quality threshold) of assets it bought in the marketplace. During the past 20 months, the Fed has tripled the size of its balance sheet by acquiring more than $1.5 trillion of new assets, more than $1 trillion of which are mortgage-backed securities.

What is going on here? Why would commercial banks hold $1 trillion more than they legally had to in reserves at the Fed, earning only 0.25 percent interest per year, and why would the Fed buy more than $1 trillion of mortgage securities of undisclosed quality in the marketplace?

If you recall, back in 2008, Hank Paulson, our treasury secretary at the time, convinced Congress over a weekend that he needed $700 billion of TARP funds to get the toxic assets off our commercial banks' books. Amazingly, within weeks of being given the funds by Congress, Paulson decided not to proceed with the purchase of toxic assets from the banks, instead giving away hundreds of billions of dollars to the commercial and investment banks and funding a series of bailouts — giving money to Chrysler, General Motors and AIG (some of which immediately found its way back to the commercial and investment banking community).

At the time, nobody explained what happened to the toxic assets on the banks' books whose purchase was the original stated purpose of TARP. We now know that the financial crisis was not caused solely by a liquidity crunch or an irrational loss of confidence, but rather by the fact that the marketplace realized that the commercial banks held more than a trillion dollars of very poor-quality assets, mostly mortgage securities such as collateralized debt obligations, or CDO’s, and that these bad assets were sizable enough to bankrupt even our biggest banks. How bad? Even the AAA tranche of the typical CDO is facing a mortgage default rate of approximately 93 percent today.

I believe the reason Paulson didn’t pursue his original toxic-asset purchasing plan is because such a purchase would have created a market price for these assets, and then all of the banks would have had to mark their poor-quality assets to this low market price. This would have resulted in the bankruptcy of almost all the major commercial and investment banks, because their leverage was so high that they couldn't withstand such a hit to their equity.

When Paulson couldn't achieve one of his objectives during the crisis, he typically called on Ben Bernanke to see if the Fed could be of assistance. Paulson was in a difficult position and needed Bernanke's help. He had, just two weeks earlier, told Congress that if they didn’t approve TARP and deal with the banks' toxic assets, the entire financial system would collapse. Now he was about to be exposed as either a liar or just completely wrongheaded, because the toxic assets were still on the banks’ books and he was using TARP money elsewhere. What I believe the Fed did next was fraudulent and deceitful, its full impact still hidden from the American public, who want bank reform.

The Fed, I am convinced, went to these commercial banks and offered to take many of their toxic mortgage assets off their books, often accepting them as collateral for loans to the banks. In exchange, the Fed credited the commercial banks with an increase in the reserves held at the Fed, so long as the banks agreed not to withdraw the excess reserves immediately. Magically, the Fed was able to take a bad asset like a CDO and transform it into a sparkling good asset: bank reserves at the Fed. The irony is that the CDO itself began as a compilation of leaden BBB subprime mortgages and had been transformed into a golden AAA security only through the alchemy of the CDO process. And I think the record will show that the Fed intentionally overpaid for these securities, so that the banks wouldn't have to acknowledge life-threatening losses on the sales or the remarking of their inventory of similar assets. The Fed also began buying mortgage securities directly in the marketplace in an attempt to create demand in the absence of a healthy securitization program.

So the Federal Reserve, with no approval by the president, the Congress, the people or their elected representatives, ended up purchasing $1.5 trillion of new assets of unknown quality. The Fed is controlled by our nation's banks, and so it shouldn't surprise us when it uses taxpayer money to save these very same commercial banks.

What concerns many knowledgeable investors is that the Fed doesn't have the money needed to purchase these assets and instead prints new money. As of March 2010, there was approximately $1 trillion of currency outstanding in the country, not including the more than $1 trillion of bank reserves at the Fed. So if the Fed doesn't shrink its balance sheet, we can expect inflation to come roaring back as banks increase lending in the future.

Some have suggested that the Fed is well-aware of this problem and is reviewing creative, if not necessarily transparent, methods to take care of it. Bernanke has said that he is opposed to the outright sale of these assets in the marketplace. One rumor is that the Fed is looking at selling more than $1 trillion of mortgage securities back to Fannie Mae and Freddie Mac. This would complete the circle of deceit, because Fannie and Freddie could fund their purchase with increased borrowings guaranteed by the government, which wouldn't show up on the government's balance sheet because Fannie and Freddie aren't consolidated entities of the federal government (even though they are now owned by the government). Total government debt would increase by $1 trillion, but it would be hidden from the taxpayer, off the balance sheet. The plan has the added advantage of the Fed never having to recognize the losses on any toxic assets included in the transfer, as Congress has already said it will commit unlimited resources to fund any future losses at Fannie or Freddie. Fannie and Freddie are the ideal places for toxic assets to go to die.

A second idea being discussed is for the Treasury, over time, to slowly transfer real money to the Fed to reduce these excess reserve balances and thus cover any resulting undisclosed losses in the portfolio. Of course, such transfers would have to be funded with increased Treasury debt.

No one knows how many of the $1.5 trillion of securities that the Fed has purchased are toxic, or what decline in value they have suffered. The House of Representatives passed legislation requiring a regular audit of the Fed's assets, but this provision was removed by Chris Dodd, D-Conn., in the financial reform package currently being debated in the Senate, for good reason if I'm right about all of this. A number of amendments to the bill are currently being discussed, including Bernie Sanders' amendment to include a required audit of the Fed. As Friday's Wall Street Journal noted: "Obama administration officials have declined to weigh in on any specific amendments, with one exception: a move by Sen. Bernie Sanders (I., Vt.) to give the government more power to audit certain operations at the Federal Reserve. Fed and administration officials have signaled they would fight to stop it at all costs."

We all want stability in our financial system, but we also want transparency in our government. It is undemocratic to allow one institution, the Federal Reserve, overwhelmingly controlled by the commercial banks that it is supposed to be regulating, to make such critical decisions about which commercial banks will fail and which will be allowed to survive — and how much of the taxpayers’ money will be used for all of it. The Fed exceeded its original mandate and acted clandestinely and deceitfully, and because of this, American taxpayers face an additional cost of up to $1 trillion that they and their representatives never agreed to undertake.

John R. Talbott is a bestselling author whose 2003 book, "The Coming Crash in the Housing Market," predicted much of the recent financial crisis. He is currently working to eliminate the power of corporate and banking lobbyists in Washington. Those interested in helping can reach Talbott at johntalbs@gmail.com.