Conan O'Brien opens up about his "toxic" relationship

On "60 Minutes," the former "Tonight Show" host spoke about Leno and NBC like a man rebounding from a divorce 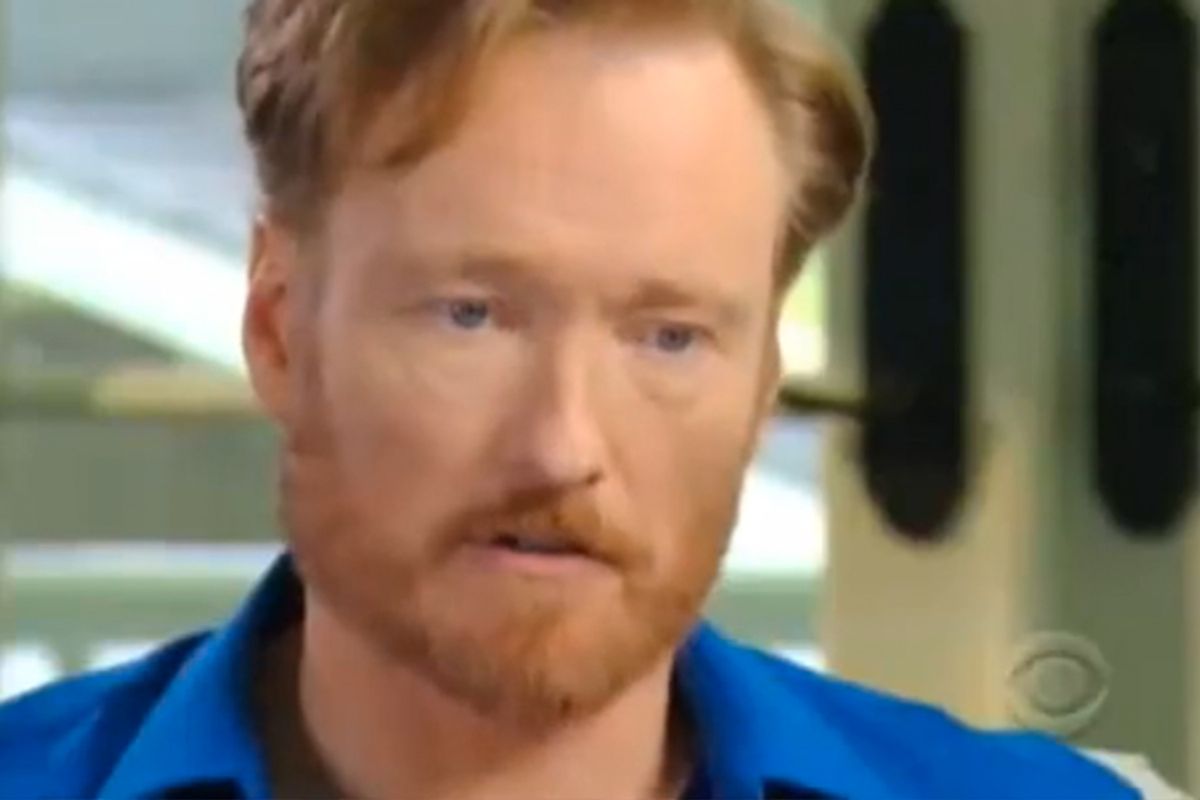 "This year is still incomprehensible," Conan O'Brien said. "The amount of stuff that's happened is going to take me a long time to process."

Conan, you're not the only one.

There's not a soul on earth who's a stranger to failure. But few have the talent to turn their biggest defeat into a moment of triumph. But for a few weeks in January, that's what O'Brien did, transforming his kiss-off from NBC into the most rousing and hilarious thing to hit the nicey nice world of late night since, well, NBC pulled a similar stunt on David Letterman 18 years ago. Now, three months and change after bidding a cowbelled adieu to "The Tonight Show" -- and in the midst of his "Legally Prohibited From Being Funny on Television" tour -- O'Brien opened up on "60 Minutes" about the behind-the-scenes drama that precipitated his exit. Well, sort of.

O'Brien, who is still bound by what must be the mother of all non-disparagement clauses, was circumspect in the Sunday segment with Steve Kroft (he'd also been restrained from giving any television interviews until May 1). Gone was the Conan of winter, a man who seemed gloriously ablaze with rage toward his network. Instead he compared his split with NBC to the end of a marriage. He talked about grieving his relationship -- "toxic," he called it, classic breakup speak -- who pulled dude-in-pain moves like tweeting through his tears and the classic, growing a beard.

Throughout the segment, Kroft lobbed questions to a clearly well-prepared, deeply cautious O'Brien. Had Jeff Zucker called him since he'd left? Had Leno? Nooooo.

"I do not think I will be hearing from him," he said. And when asked if he believed Leno had acted "honorably," he replied like a lover trying to stay classy. "What I know is what happened, which is he went and took that show back." He added, "Had I surrendered 'The Tonight Show,' I would not have come back six months later. But that's me." Subtext: Because I'm not a jerk.

Then, in the interview's most revealing moment, he responded to Kroft's question about whether Leno had also been "screwed" by NBC with laughter, a dramatic, amused eye roll, and a polite, "It's harder for me to get inside his head and argue his side. I'm happy with my decision. I sleep well at night. I hope he's happy with his decision."

In fact, the closest O'Brien got to flashing any temper was when he admitted, "I don't know how thought out this whole thing was. But if they wanted me to leave … they got their wish." And when asked about NBC's assertion that the show was losing money, he shook his head and replied, "For anyone to say the results were in after six months doesn't ring true to me ... I don't see how that's possible. Everybody knows they did what they had to do, and the only thing I take exception to is people saying, 'Conan was losing money.'"

Like any man coming out of the fog of heartbreak, O'Brien hasn't exactly returned as the lighthearted cut-up we knew during all those years of his previous relationship. In September, he'll reemerge at TBS (which he pointedly referred to as "young"), and chances are, in much the manner of everyone who's been through a breakup, he'll be bringing his baggage with him. Maybe by then he won't have to reassure his fans that "I'm fine. I don't regret anything," and can go back to being "comedically absurd and ridiculous." But this time, the man who's still doing the heartbreak anthem "I Will Survive" every night on his tour will be sporting a little more bittersweet perspective -- and a lot more facial hair. And if Letterman's anything to go on, years and years of sly digs at NBC's expense.