So long, farewell, adieu and thanks -- and a trove of directorial wisdom from Robert Altman and Billy Wilder 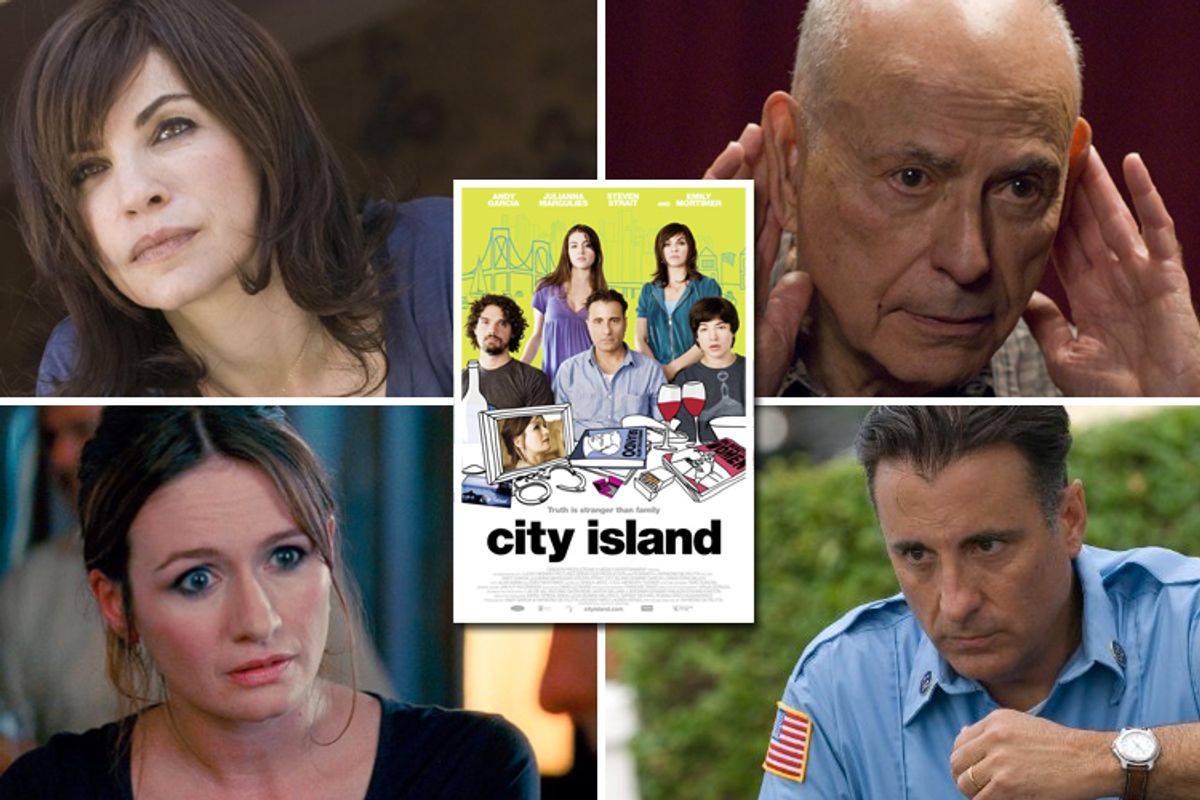 This is my last Salon column. How the hell much more horn-tooting can I really do and still retain the faintest amount of self-respect? I'd like to thank Salon for generously offering me this space and the freedom to write about anything I wanted (anything "City Island"-connected, that is) at pretty much any length I chose. The audience I was able to reach and who were thus able to hear about "City Island" was, of course, tremendous. The movie has expanded weekend after weekend into more cities, and is in the process of becoming a bona fide "sleeper hit" -- a movie that the industry naysayers didn't initially see a lot of value in, but one that has outlasted many of the movies that opened alongside it and is growing stronger with every showing. (You can find updated theater listings on our Facebook page.) The audience -- as always -- wound up in charge. Our audiences are giving "City Island" a remarkable life that couldn't have been anticipated.

And I very much appreciated the many comments that came in from the readers -- including those of one of my most avid readers, who hates everything about me with the kind of passion that can only be love. The various misadventures that went into the creation of "City Island" are by no means unusual in filmmaking -- all movies really are well-prepared accidents. Writing about the making of this film gave me perspective on the craft I've chosen to pursue and also made me realize how deeply committed anybody who makes a film must be just to follow it through to some sort of completion.

Whenever I've wrapped a film, I find it impossible to watch another movie for a while because all I see is the outside of the frame filled with the set and its complications. Unable to lose myself in the story, I can only identify with the director and the difficulty and tedium he or she must have experienced while shooting their movie. I remember turning on "Oliver" shortly after we wrapped "City Island" and watching the "Consider Yourself" number -- normally a delightful cinematic treat. All I could think of was the assistant directors and what they had on their hands: Crowds! Kids! Horses! Playback! Oy. I turned it off, grateful to not be on their set in their shoes. You really do think that you might never do it again. And then a few weeks later, the pain has faded and you're on the phone to your agent.

Such is the life of a film director.

Ever since I was quite young, I was fascinated by directors -- not just by the job but by the peculiar combination of qualities that it takes to make up a personality that can actually handle (with enthusiasm) this taxing, strangely addictive profession. I early on began to identify several traits that seemed to unify most directors: they are punctual, rarely late -- even the ones that go over schedule and over budget. They are always the ones that end the conversation at hand -- they never stay too long at any party. They fear little socially -- confidence is essential for the profession. Yet their sociability is highly selective. The charm can be turned on and off at will. Let's say that they tend to be emotionally efficient. Charm, anger, aloofness, delicacy, friendliness, ruthlessness ... these qualities are available at all times but accessed only in order to achieve the necessary result. Long ago, the New York Times Magazine ran a profile of Mike Nichols and I've never forgotten the cover photograph of him. He was snazzily dressed, holding a cigar and smiling. But his eyes told a different story. They clearly showed a man determined to have everything -- including that particular photo session -- go his way.

Maureen Lambray, in the forward to her wonderful portrait collection "The American Film Directors," also noted that they "smoke a lot and their eyes are attracted to accidents." I'm not sure what she means by the last comment but I like its dark implications. As for smoking, yes they did. But they're all dead now. And I quit years ago.

Being humans who perform a superhuman -- or perhaps subhuman -- job, directors have advice to give. I always find directorial aphorisms amusing and instructive. So why not close out this column with a few of the choicest of these nuggets I've collected over the years?

"The first thing to go is the legs." So said the late Sydney Pollack. He's correct. By the end of week two, you're usually sitting down -- often lying down--whenever it's convenient.

"Just tell Raymond not to work too hard." This from Robert Altman, who told this to Peter Gallagher. Peter, who appeared in my first movie, "Café Society," told me one day that he would be having dinner that evening with Altman -- long a hero of mine. I asked Peter to ask him for any advice for me on my first movie. The above was his response. I later got to know Altman and he told me: "Listen to everyone's suggestions and use the good ones, because you'll get all the credit anyway."

From my friend Peter Bogdanovich, when asked by Tom Sizemore, who was playing Pete Rose in a Bogdanovich-directed biopic, how to make such an unlikable character acceptable and interesting: "Where's the redemption?" asked Sizemore. P.B.'s unruffled answer: "In the close-ups."

Henry Hathaway on compromise: "If you compromise only once a day on something and your shoot lasts 50 days, that's 50 fucking compromises in the finished picture."

On the other hand my old teacher Eddie Dmytryk said: "In films, compromise is a way of life."

When I was a student at the American Film Institute, the late Dan Petrie -- a marvelous fellow and fine director -- did a seminar in which somebody asked him what the most important single element in a film was: acting, script or photography? Without pause, Dan answered: "The budget!"

Then there are the words of the great Josef von Sternberg: ""Man has yet to invent a machine more complicated to build, impossible to use or unpredictable in the quality of its finished product, than the motion picture."

James Cameron suggests: "Pick up a camera. Shoot something. No matter how small, no matter how cheesy, no matter whether your friends and your sister star in it. Put your name on it as a director. Now you're a director. Everything after that, you're just negotiating your budget and your fee."

"Masterpieces are films that come to you by accident." From Sidney Lumet.

And from Alfred Hitchcock: "The length of a film should be directly related to the endurance of the human bladder."

Long ago I noticed that a number of films I liked to watch whenever they played on TV all were written and directed by a man who went by the professional name of Billy instead of "William" and whose last name was Wilder. He wrote with one of two partners -- the lawyerly sounding Charles Brackett and a name that always sounded to me like it belonged on an antique computer -- "I.A.L. Diamond." Some of the films were funny, others were dark and brooding. But I could tell early on that they came from the same mind and this, more than anything, made me realize that filmmaking could be a personal art. So why not close with a handful of Billy Wilder quotes as my way of thanking him for having played such a large role in getting me involved with this delightful mess of a profession.

On having relationships with actresses: "I never get involved with my actress. If I have a yen, I fuck the stand-in."

On subtlety in films: "In movies everything must be made obvious." (The person he's talking to:) "But Billy, what about subtleties?" "Make the subtleties obvious also."

On female characters: "Unless she's a whore, she's a bore."

On Marilyn Monroe's chronic tardiness: "My Aunt Minnie would always be punctual and never hold up production, but who would pay to see my Aunt Minnie?"

To Louis B. Mayer, after the great mogul saw Wilder's masterpiece "Sunset Blvd." and lambasted the director for having the temerity to have made a movie that was critical of Hollywood: "Fuck you."

And finally the immortal: "A director must be a policeman, a midwife, a psychoanalyst, a sycophant and a bastard."