Gulf Coast diary: My house smells like a truck stop

On the Mississippi Gulf Coast, we're just beginning to recover from Katrina. And now this 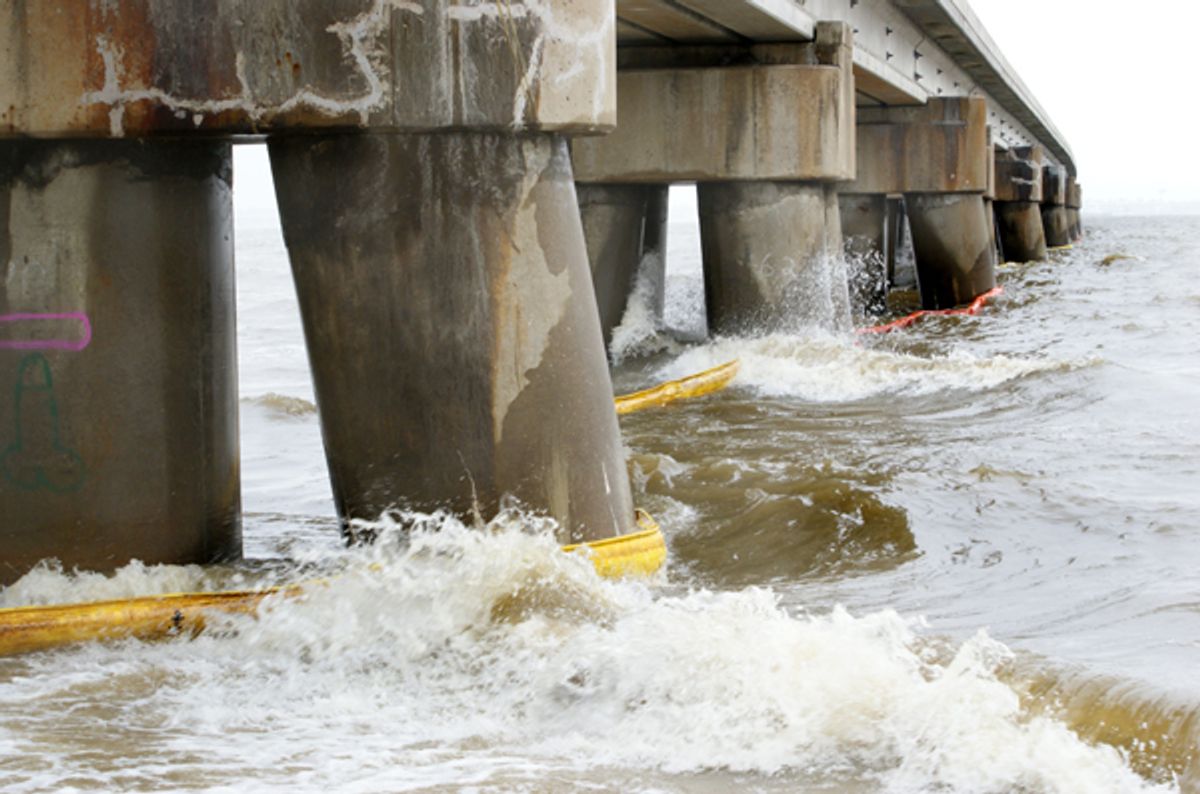 A crude orange and yellow barrier designed to keep the Gulf Coast oil spill from reaching the shores of Bay St. Louis, Mississippi is no match for the waves.
--

About three o’clock Saturday afternoon, I realize my house is beginning to smell like a truck stop. Breezes from the Gulf gush through my open windows, but instead of the light, briny scent of salt, today they seem weighted by a heavier odor, reminding me of diesel.

Earlier in the day, my fiancé and I had driven over to the railroad bridge that crosses the Bay. It’s a new bridge, completely rebuilt after Katrina devoured the old one in 2005, leaving only pilings. Now what looks like an orange and yellow cable is tied to a concrete support on the Bay St. Louis side and stretches all the way to the town of Pass Christian on the other side of the bay. It’s supposed to be a barrier to keep the oil spill in the Gulf from moving into the bay itself and the fragile marshes beyond. The blustery weather has conjured up whitecaps that beat the barrier against the bridge pilings, splashing over it effortlessly.

It was easy to see that if the enormous amoeba of oil makes it this far, the puny barrier will be of little use. I took pictures of the barrier and of a dead, sodden bird on the beach. I doubted it was a victim of the spill, but wondered if I’d be seeing a lot more of them in the coming weeks.

Note that we drove to the railroad bridge. It’s probably only a half-mile away. We could have biked. Lots of people here in Bay St. Louis bike or walk, mostly for recreation or exercise. From time to time, I’ll go on a binge where I’ll use my bicycle to run nearby errands. It’s easy here. Everything’s pretty close. The bank tellers get a big kick when I come through the drive-through window on my bike. But like most Americans, I’m completely dependant on my automobile and mostly mindless of the ultimate cost.

Back at home, I work through the afternoon on a television ad for BridgeFest, an annual town event that celebrates the rebuilding of the highway bridge across the bay that was wiped out by Katrina. The spill has my anxiety working overtime: I wonder how many people will attend the festival, what our beaches will look like in two weeks, if the smell of oil will fill the air that day. My e-mail alarm keeps sounding as I work. Facebook friends by the dozens are joining groups like “Gulf Coast Oil Spill Volunteer Cleanup” and “Help Save the Gulf Coast from the Oil Leak.” Local Sierra Club members are swapping information and contact numbers, so folks can report damage or be trained to rescue birds.

When I first heard of the spill over a week ago, I thought of all that we have been through here. We've dealt with disaster at its worst. It takes a lot to alarm someone who’s been through Katrina. They’ll fix it fast, I thought. No big deal. Yet, as the days passed, the news increasingly brought grim tidings, feeding a communal sense of foreboding.

The headline of today’s local newspaper, the Seacoast Echo (established 1892), shouted, “Worse than Katrina.” But our local congressman, Gene Taylor, flew over the spill this afternoon and said that it’s “not Armageddon.” So, while no one is certain what the future holds, many of us in this little town are apprehensive. Folks on the Mississippi Gulf Coast are just beginning to recover from a natural disaster of epic proportions and now we’re facing insult to injury - this time by the hand of man. While I understand that life’s not always fair, I wonder if it’s rigged somehow in favor of the House of Bad Luck, at least here on the Gulf Coast.

In the evening, we pile the dogs into the car again and drive back to the beach. Larry and I figure it could be the last time in a long while they’ll be able to safely swim in the water. Reporters are saying it could be months before the gusher is plugged.

On the way, we talk about the irony - how the Mississippi coast was so devastated by Katrina, yet we’ve somehow made our way through the despair, only to be confronted now with the potential loss of our fishing industry, our natural beauty, our tourist trade. We wonder briefly if we’ll have to evacuate if the oil smell gets too bad.

At the beach, the skies promise a coming storm, but the dogs are jubilant. With no hope of catching it, they chase a big blue heron through the surf, just for the sheer joy of running with wind in their ears. I corral them as a lone woman approaches, but it turns out she’s a dog lover and starts a conversation.

We learn that she’s from New York. She’s taken a long-term job repairing the beach road, still under construction from Katrina damage five years before. She had no idea before she came to our coast that Mississippi was even impacted greatly by the hurricane. The news had led her to believe that the catastrophe had happened only in New Orleans.

“It’s so beautiful here,” she says. “The thought of that oil spill coming ashore after all you’ve been through is just heart-breaking.”

One of my dogs is eviscerating a dead fish on the beach and I’m distracted, trying to call him back. But I hear Larry agree with her.

Then we bid farewell to the woman, round up the dogs and drive back to our house, less than a mile away.

Ellis Anderson resided in the French Quarter for two decades before moving full time to Bay St. Louis on the Mississippi Gulf Coast in 1996.  Her book, " Under Surge, Under Siege, the Odyssey of Bay St. Louis and Katrina ," published by University Press of Mississippi, will be released August 1st.