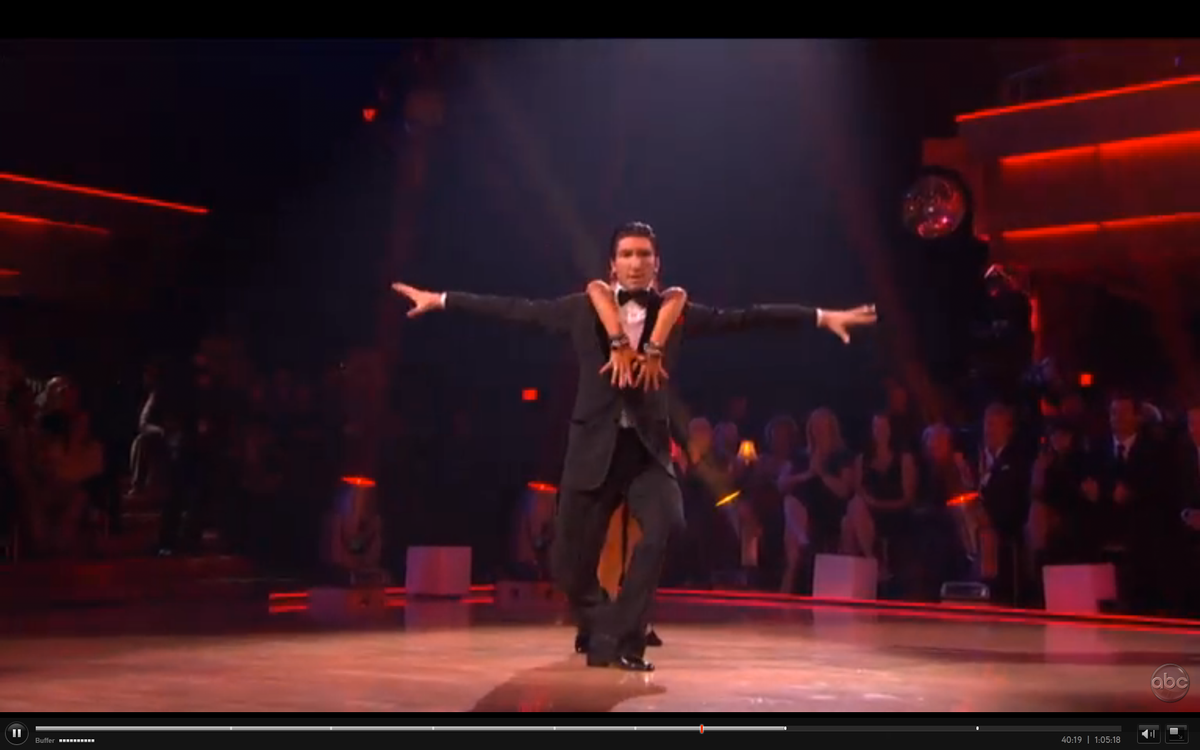 And then there were six (or as Chad would say, "seis.") Last week we lost our beloved Jake in a not-so-shocking elimination where he cried like Lindsay Lohan’s money manager and pledged his undying love for dance partner Chelsie - while doing his best to remember his fiancé’s name. "Venita and I are so grateful for your friendship," he said, as a confused Vienna looked on, "you’re like family." In the background, Nicole was all "family my ass, LOSER" and Pamela made a mental note to "tap that" before he walked into oblivion forever. Farewell, Jake, we will not remember ye three days hence.

The remaining contestants danced two routines, a singles dance followed by a group number where 3 of them performed to Lady Gaga and the other three to Madonna. Both scores were added together to give each contestant a combined overall score out of 60.

Erin and Maks danced a traditional quickstep. The rehearsal segment, which I often find more entertaining than the actual dancing, included a fairly testy argument about whether Maks should keep his pants on during their routine. I can’t tell you how many times I’ve had this same argument with myself, usually in the company of a new found friend late on a Saturday night after a few too many vodka drinks, so I could relate to the conflict here. Len is tired of Maks disrobing every dance, making Erin afraid they will be docked points if they poke the English beast. But Maks is feeling defiant. And Erin is all "that’s not cute" and "you’re totally being bratty right now" and chewing gum like a high school cheerleader while caressing her long, flowing blonde hair and trying to remember what Cosmo said in April’s "How to Tame Your Cranky Man Without Giving Him a Blowjob" article. Judges loved the routine, which included more of a "pants transformation" than anything else and didn’t distract from Erin’s dancing. They said it was her best routine ever and the scores reflected her growth.

Cheryl brought Kate Gosselin’s discarded dance instructor, Tony, in to help teach Chad how to butch it down a little bit for their Viennese Waltz. She was once again in full drill sergeant mode as she snapped and snipped at him with every wrong turn and incomplete motion, causing him to stamp his feet and roll around like a 4-year old. He pulled it together for the dance though, floating across like the floor like a gigantic gay swan, extending his pretty wings and taking graceful flight while the ladies of America swooned. "It’s nice to see a man being so TENDER," Carrie Ann cooed, while Chad tentatively drank it in, trying to push down the creeping homosexual panic. After the critique he scratched himself, gave host Tom Bergeron a cool-boy end-zone handshake and blew his nose loudly on his silky white shirt -- reclaiming his masculinity forever.

Nicole and Derek danced a Waltz. Len was not pleased with her last week for getting all sexy and hodge-podgey with the Samba, so they took a more traditional route with this week’s performance. They danced in honor of Nicole’s aunt, who has Down’s Syndrome, to her aunt’s favorite song "You Light Up My Life." As usual she was almost otherworldly in her ability, causing the judges to rave about the dance but compelling them to judge her at a higher standard than the others. And they aren’t the only ones. Nicole never seems happy with what she does, no matter how good it is -- and so like any successful performer she won’t be happy until she is all 10s all of the time. Not this week, though.

Pamela was in full "I’m more than a sex-bomb" public relations mode this week, taking her partner Damian on a side trip to the California Wildlife Preserve where she showed America how she volunteers her time by cleaning crap out of Lemur cages. But fear not, pervs. During the rehearsal segment, Damian tied a scarf around both of their hips, (or "heeps" as he says in his adorable Australian accent) to make sure that they maintain their close frame during the routine. This instantly set the sex bomb off as she giggled and writhed through their practice session, all thoughts of lemur crap long gone. Their Waltz was elegant and sweet but the judges were once again mixed in their reviews. Len started his critique by referring to her “assets” and suggesting that she "firm up" her "loose upper body" -- something she has no doubt been doing under the care of plastic surgeons for many years. Overall her scores were better than she’s done before, but still not as high as the others.

"Louis and I are like a married couple that should have divorced a while ago but are staying together for the kids," said Niecy in their packaged rehearsal segment before doing a full Fred and Ethel routine for the cameras. It’s clear she and Louis know that her charm lies in comedy, tossing aside the heavier emotional narrative they had going on earlier. She also knows that she and Pam are the two weakest links in the dancing chain now, so it was time to turn up the heat. They danced the dreaded quickstep and did a fantastic job, earning raves from the judges and getting her best scores ever.

Evan and Anna danced an Argentine tango. While Chad’s challenge was to butch things down to get the job done, Evan needed to butch it up. "Don’t submit to the woman in tango," Anna hissed forcefully while thrusting her hips into his tight, polyester pants. This caused Evan to tear up, fan his eyes urgently with his birdlike hands and whimper "I promised myself I wouldn’t CRY." Well, he didn’t really do that -- he’s not Johnny Weir -- but rather closed his eyes and thought of Hugh Jackman. And boy did it pay off. Evan threw her around the dance floor like a cowboy tosses a whore over his shoulder after a barfight, revving Carrie Ann’s and Bruno’s engines and leading to perfect scores from all three. It seems if you’re naturally manly like Chad, then acting soft and sweet is hot, and if you’re naturally sweet like Evan, then acting like a Neanderthal is preferred. No wonder men are confused.

It seems like you can’t flip the channel nowadays without running into a Lady Gaga or Madonna themed show of some sort -- perhaps providing the clearest evidence yet that the radical homosexual agenda has finally persevered. This week, three of the contenders were put together into Team Gaga and the three others into Team Madonna.

Erin, Niecy and Evan danced a cha cha to Madonna’s "Holiday." Judges loved it, but not quite as much.

No matter how you sliced this one it still came up Team Gay -- and what’s not to love about that?