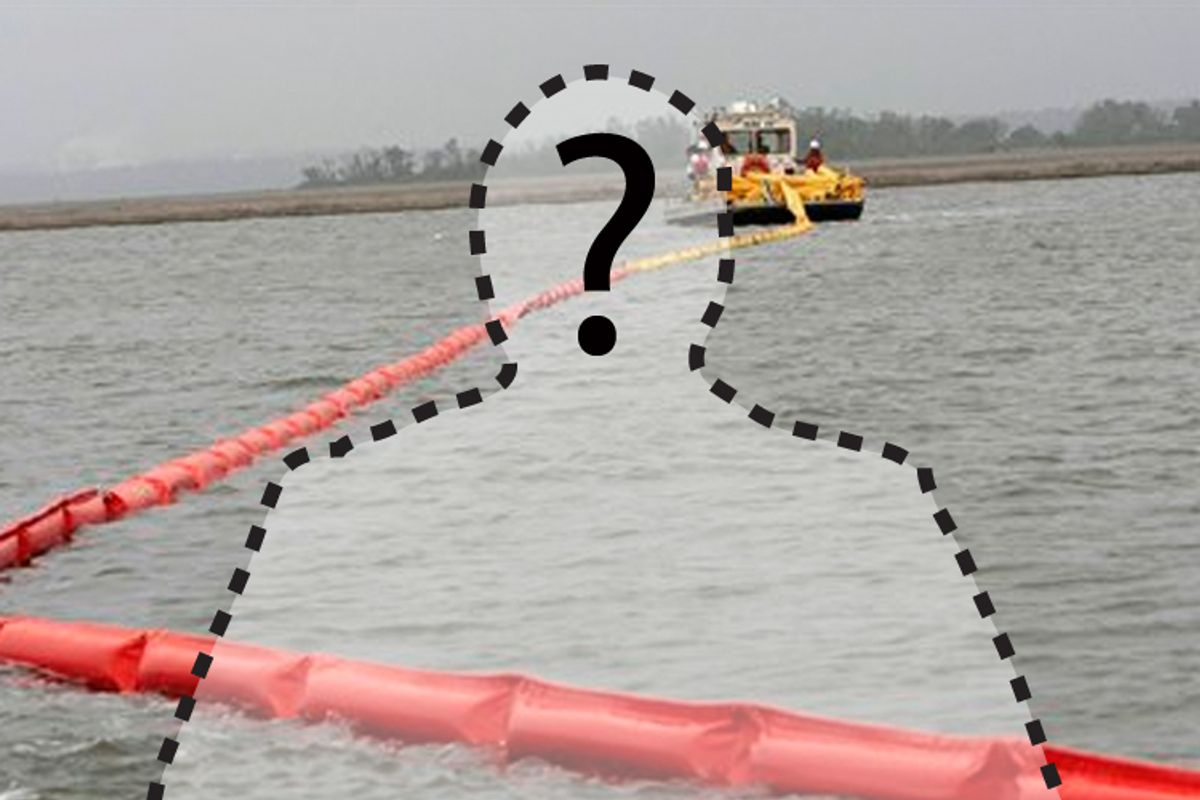 A "setback" for offshore-oil drilling advocates, a profound opportunity to say "we told you so" for environmentalists, the Deepwater Horizons oil spill is above all a big huge mess. If you are searching for the perfect metaphor to describe humanity's 21st century plight -- an energy-hungry and energy-dependent civilization occupying a resource-constrained planet -- then you need look no further than at a satellite photo of the giant spreading oil slick in the Gulf of Mexico. That massive hydrocarbon stain is our collective scarlet letter, the price we pay for a lifestyle of extraordinary affluence and comfort -- at least as compared to most of the humans who have ever lived.

And it is a price we are going to keep on paying. Sure, politicians from California to Florida to Washington are currently scattering from their previous pro-drilling stances like terrified partridges startled out of the brush by an approaching dune buggy, but once the freshness of this spill subsides in our collective memory, and oil and gas prices resume their relentless rise, the pressure to drill here, drill now, will bubble up again. Never underestimate the power of human self-interest to put short-term benefits ahead of long-term security.

In the immediate aftermath of the disaster, there have been numerous efforts to cast blame. Partisans of the right would like to make this moment Obama's Katrina (requiring of them bizarre intellectual contortions in which exactly the kind of activist government that they typically deplore aggressively stomps all over a private corporation at the first sign of trouble). Sure, it's entirely possible that the administration trusted too long in BP's protestations that everything was under control. On Saturday, the New York Times reported that the Obama administration had "missed chances to act" and editorialized that the "consequences might have been minimized with swifter action," but it's very unclear what practical impact the government could have had by moving more quickly. The disaster could have been declared a "spill of national significance" a few days earlier, and the Defense Department could have brought in military planes to distribute chemical dispersants on an accelerated schedule, but vast quantities oil would still be erupting into the Gulf.

Put the politics aside: There is no immediate "effective response" to a disaster of this magnitude. The damage is done.

If fingers must be pointed, it's just as easy to look back to the previous administration and recall how under Bush's watch the regulatory authority for offshore oil, the Mineral Management Service, was a farcical operation in which oil lobbyists and regulators partied together in sex-and-cocaine-fueled binges. Oil companies have long gotten what they wanted from whomever was in control in Washington.

Or you can get more granular, and put BP's efforts to ward off and weaken safety regulations under the microscope. BP relied on technology that some petroleum engineers had been warning for years had flaws. But BP's profits depend on extracting oil at the lowest cost possible, not with the greatest safety possible. Just as Don Blankenship made sure everyone at Massey Coal knew that "running coal" was the primary responsibility of mine operators, and skimped on safety, so too did Tony Hayward's BP ruthlessly cut costs to increase profitability. And that, of course, put pressure all down the line -- on Transocean, the rig operator, and Halliburton, the oil services contractor -- to get the job done cheaply.

The oil spill has been a national Rorschach test of sorts, with everyone seeing their own particular nightmare in the spreading slick, but National Review's editorial response is particularly telling.

At this time, it is not obvious that any new regulation would serve any purpose other than to let politicians claim that they've "done something" in response to the accident. As usual, overreaction is a significant danger ...

It takes some serious cojones to argue that one of the worst oil spills in U.S. history, a catastrophe that could dramatically impact the economies of Gulf states and the ecology of one of the world's great ecosystems, is not the time for new regulation. The National Review argues that market forces will force private oil companies to clean up their act, that investors will punish the malefactors -- BP, Transocean, Halliburton -- so harshly that all operators of deep-water drilling rigs will have to implement more rigorous safeguards.

Here is where we see the deep structure of the mess we're in most clearly. National Review's position seems, on its face, ludicrous -- only after things get broken do we try to fix them. Don't even think of rejiggering the system to give private industry more incentive to invest in safety. We have the clearest possible evidence we need for a more aggressive government posture for regulating private industry involved in resource extraction, and the Review has collectively stuck its head 5,000 feet under water in Gulf seabed mud.

But what's even more scary is that this is actually standard operating procedure in the U.S. We also have all the evidence we need that our reliance on fossil fuels is poisoning the entire earth, but, as Bill McKibben eloquently points out, that evidence is mostly invisible, compared to an oil spill, so there's even less impetus to do anything meaningful.

A year and a half ago, "drill, baby, drill" was the most effective rallying cry for the right during the presidential campaign. Even the National Review acknowledges that the Gulf oil spill has neutralized "whatever usefulness it may have had as a slogan," but that's only because an oil slick is a nasty mess that can't be ignored. Ocean acidification and the relentless buildup of carbon dioxide in the atmosphere are much less in our faces. But there will be no political pressure to do anything about them, and no willingness to make the sacrifices necessary to change our lifestyles to be less dependent on energy consumption until we are all choking on our own exhaust. Until the very last moment, the corporations whose profits depend on fossil fuel extraction will fight to delay any action, will bankroll skepticism and undermine the findings of science. Will BP stop lobbying against stronger safety regulations after this massive cock-up? Of course not!

Eventually there will come a moment when it is too late, when we can no longer ignore what we've done. And the New York Times -- if it is still around -- will run editorials pointing the finger at this administration or that administration for not moving more swiftly, for not taking proactive action that could have made a difference, for not rallying the world to clean up its act. This time, the paper will be right.