From "Sexagon" to "Tennis Corset," the branding of varnishes is turning all shades of crazy 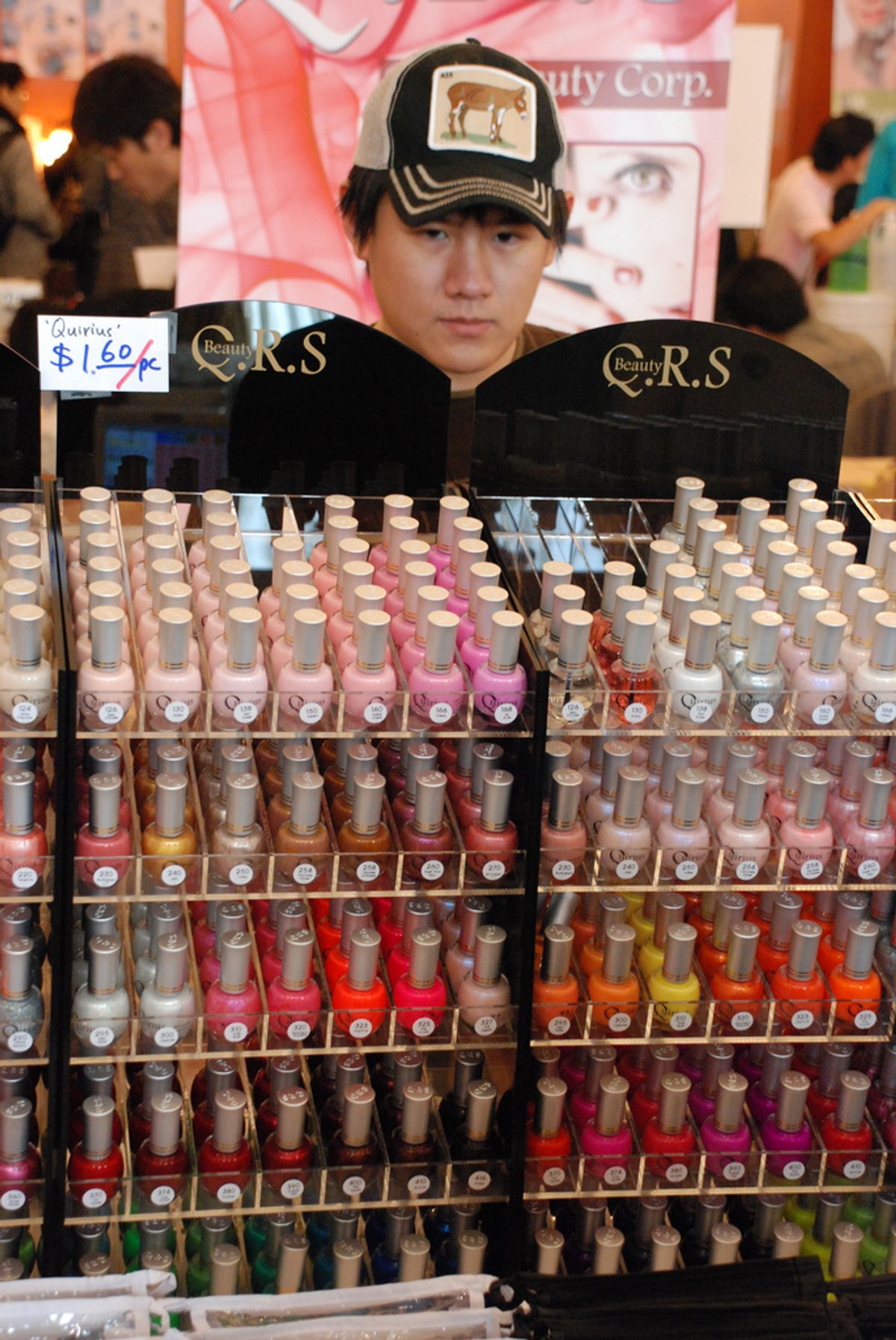 Salon e-mailed Garber to talk about all the ways nail polish names can go bad.

You've obviously seen a lot of terrible nail polish names. What are some all-time worsts?

There are two horrific nail polish names that have a special place in my heart: "Skinny Dip'n in Lake Michg'n" (released by OPI) never fails to impress me with its sheer incomprehensible idiocy. I don't understand the need for the apostrophes at all, but assuming that they're necessary -- why, for the love of everything good and holy, would you put them there? My leading theory is that the creator of this name was conducting research by taking a swim in Lake Michigan when he was transmogrified by nuclear waste from the Chicago River and developed punctuation-related superpowers.

In terms of offensiveness, I have always been amazed by "Pearl Harbor" (released by Sinful Colors). Why would anybody name a nail polish after a national tragedy? I assume that Sinful Colors' next collection will include nail polishes named "Auschwitz" and "September 11th."

What are the worst trends you've seen lately?

One trend that seems to be taking over lately is shock value through vulgarity. I've seen names like "Dick Weed," "Phallic," and even "12-Inch Gang Bang." Really, what are we, 13 years old?

Another theme I've seen too much of lately is antifeminism. Every time I see a name that implies it's cute and feminine to be helpless, like "What's a Tire Jack?" and "Lost Without My GPS," I have to check to make sure I didn't step into a time machine and get off in 1950. Just as bad are the names that echo the stereotype that a woman's goal is to extract jewelry from men, like "How Many Carats?"

Do you think there's a push to have non-traditional, sort of edgier names?

I think "edgy" names like "Jizz" are pure, one hundred percent marketing. There are hundreds of white nail polishes out there -- what can a company do to try to sell its version? We've gone through decades of nail polishes named "Adorable Apricot" and "Ravishing Rose"; how many fruits and flowers can be left at this point? More significantly, I think that there is a lot of market upside to a non-traditional, unpretty name. No one will be compelled to buy a nail polish because the name is vaguely pleasant, but an unconventional name might snag a shopper who wants to think of herself as an iconoclast.

Is there a main offender, brand-wise?

In terms of sheer quantity, there is no question that the main offender is OPI. The primary trick in their arsenal is replacing part of one word with a random similar-sounding word. Not exactly Algonquin Round Table-worthy -- I wish I could hire a linguist to go over there and explain to them what a pun is! OPI is also a great source of bad nail polish names because they are continually releasing collections themed to particular countries. The results make me think that no member of OPI staff has ever been overseas -- most of their "exotic" names are just stereotypes, some bordering on racist.

A lot of these names seem to have no connection to the actual shade of polish. How much connection do you think there should there be between a color and its title?

I'm happy to see some flexibility in the connection between nail polish colors and their names. How dull would life be if you woke up in the morning and had to decide whether to put on "Light Baby Blue With Fine Silver Glitter" or "Moderate Cerulean With Matte Finish"? Knowing that I'm wearing #57FEFF on my toenails is not likely to make me smile. On the other extreme, it's pretty silly to have a name with absolutely no connection to the color it represents. Naming a nail polish is like titling a painting. A good name is complementary, not redundant, to what it describes. Just because your painting is of a guy on a horse doesn't mean you have to call it "Man Riding Stallion," but nor should you call it "Octopus Strangling Banana."