To know the longtime voice of the Detroit Tigers, through the radio or in person, was to love him 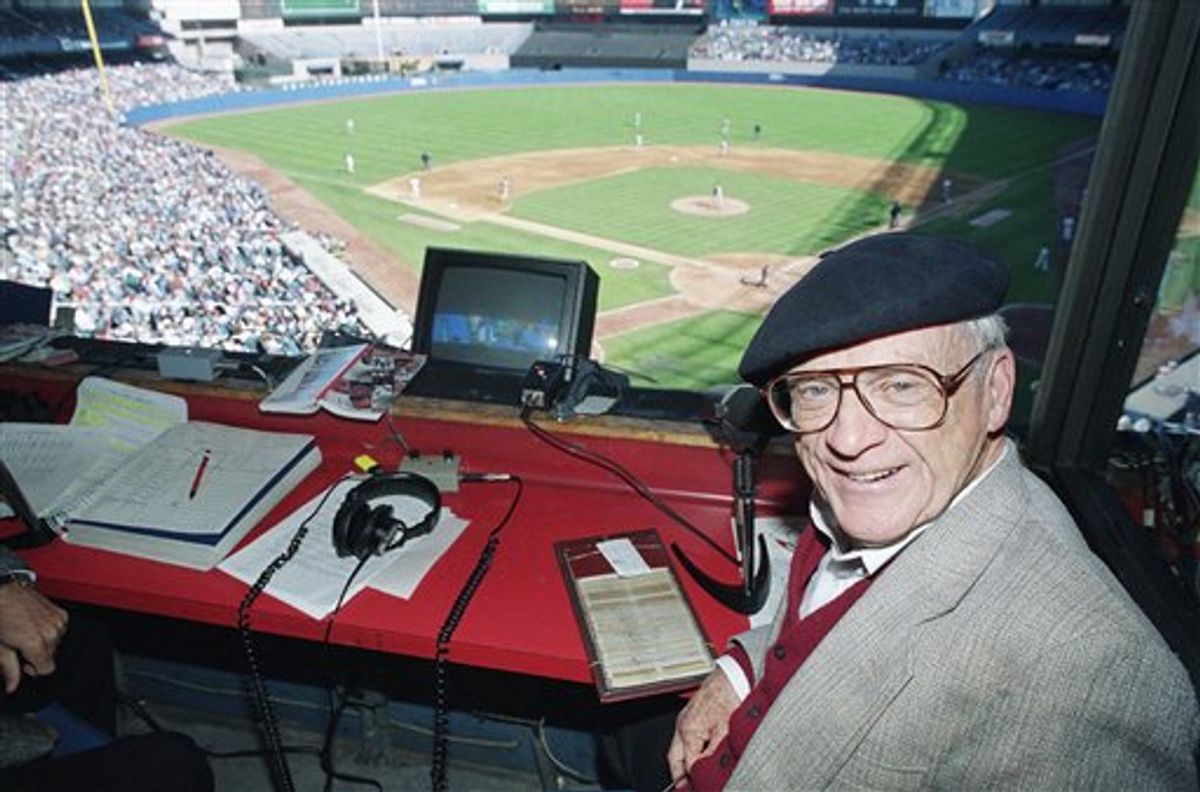 FILE - In this Oct. 3, 1993, photo, Detroit Tigers broadcaster Ernie Harwell pauses during a break in the action in the Tigers' baseball game against the New York Yankees at Yankee Stadium in New York. The Tigers say Harwell has died. He was 92. (AP Photo/Paul Hurschmann, File) (AP)
--

The best three days I ever spent on the clock were the three days I spent in Detroit with Ernie Harwell, the longtime voice of the Detroit Tigers, in 2002, his last year in the broadcast booth.

Harwell died Tuesday at 92, eight months after announcing that he had terminal cancer that he would not treat. John Lowe of the Detroit Free Press, in what will surely be the definitive obituary, quotes Harwell at the time: "I'm ready to face what comes. Whether it's a long time or a short time is all right with me because it's up to my Lord and savior."

I grew up not listening to Ernie Harwell but to the man who replaced him in the Brooklyn Dodgers booth in 1950, Vin Scully. I hadn't come to know Harwell until 1999, when baseball broadcasts were still streamed online for free and Harwell had returned to the radio side after five years on TV. Like generations of Michiganders, I quickly fell for his warmth, his charm, his knowledge of the game, his old-timey broadcast voice.

When he announced that 2002 would be his last season, I wanted to write about him, so I got in touch with him through the Tigers, asking if I could come to Detroit for a few days, hang out with him, shadow him. A day or so later there was a voicemail message. That incredible voice was right on my phone! I saved it for as long as I could. I wish I still had it:

"King, this is Ernie Harwell from Detroit. I don't know that there's much to write about me, but sure, come on up."

I had planned to write about a fundamental shift in the way people follow baseball, about how Harwell was one of the last of the old radio men who were identified with a team as much as any player, often more than any player. Now, with most games on TV, far more games on national TV, larger squads of announcers and the Internet providing more baseball information than any one person could ever absorb, fans weren't dependent on that one broadcaster to serve as the conduit to their team.

Yes. Well, it seemed interesting in my head. A little of that stuff made it into the piece, but after about 10 minutes with Ernie Harwell, I knew that my story couldn't be about anything but Ernie Harwell.

It's hard to talk about what kind of guy Ernie Harwell was without sounding like you're talking about a guy on the night of the day he died. But it was just as hard when he was still alive. I spent three days with him, and he was unfailingly kind, generous, cheerful, energetic, positive and humble. And not just with me. At 84 years of age, he was tireless, making sure as he roamed the ballpark -- which he did a lot -- that every fan who wanted a moment with him -- and there were many -- got the moment he or she wanted.

Jon Miller, the ESPN and San Francisco Giants announcer, was hurrying across a field when I sidled up to him asking if I could talk to him for a minute. He kept walking as he asked what I wanted to talk about. "Ernie Harwell," I said, and he stopped on a dime. All of a sudden, I had his attention and he grew animated as he told stories about Ernie.

Mike Shannon, the longtime St. Louis Cardinals broadcaster, was pressed for time just before a game one day but he told me to sit in the press box and wait for him. Minutes before the first pitch, he leaned out the door of his radio booth. "Where's the guy who wanted to talk about Ernie Harwell?"

"He's so generous with his time," I wrote back then, "that a reporter in town for three days to research a story on him confesses on the third day that he's just about run out of questions to ask." That reporter was me, of course. We were sitting in an empty broadcast booth in the Comerica Park press box when I told him that. He looked out at the field for a few seconds, then started throwing out some suggestions, things I might want to ask about.

It sounds silly to say, but after spending time with Ernie I told myself that I would try to be a better person, more generous, more cheerful, more optimistic, more kind. More like Ernie Harwell. I failed miserably at this, of course, but I've returned to that thought fairly often over the years, and I like to think I've moved just a tiny bit in an Ernie-like direction.

Here's the story I wrote about Ernie. I think I worked harder on it than on anything I've ever written. I did things I never do. I made outlines, wrote things on index cards and arranged and re-arranged them.

I swung for the fences, wanting to do justice to the living legend and the time I'd had with him. I used a flamboyant structure, organizing the piece around Ernie's call of a single game, weaving his epic story between snippets of a thoroughly ordinary contest between two lousy teams, the Tigers and the Kansas City Royals.

I'm not sure it worked. But you don't get to hang out with the greats that often, and it's less often that you end up liking them. I wasn't going to write just another piece about Ernie Harwell in his last year.

A few days after it ran he sent me an e-mail thanking me for the piece. "Best thing that's ever been written about me," he wrote. I'm sure he said that to every single person who ever wrote a story about him. And here's the thing: I'm sure he meant it every time.