The most interesting Republican you've never heard of 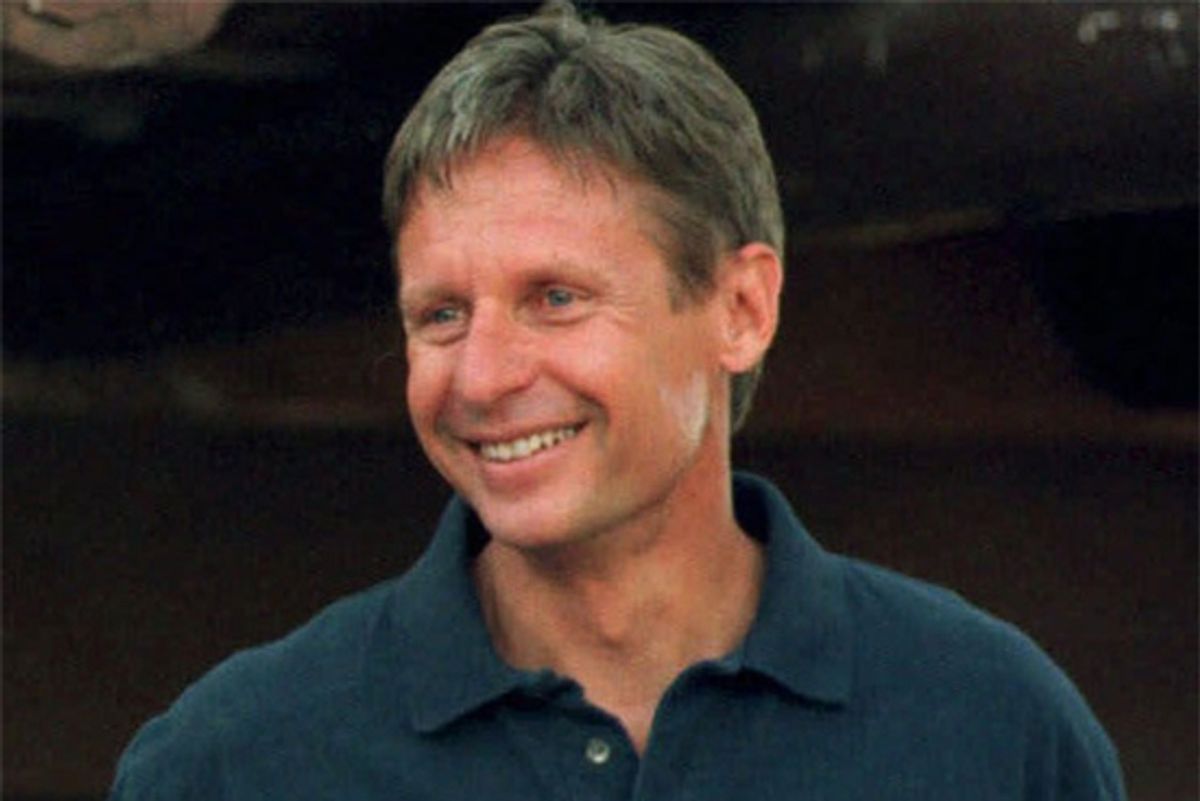 Gary Johnson, a former governor of New Mexico and a likely candidate for the 2012 Republican presidential nomination, is talking about hookers.

"It's never been a consideration that I would enlist the services of a prostitute, myself personally," he says. "But if I were to do that, where would I want to enlist that service? Well, it would probably be in Nevada, where it's legal, because it would be safe."

When's the last time Mitt Romney engaged in a hypothetical like that? But Johnson doesn't even blink. It's not like this is the only topic on which he risks offending the GOP's base. He also favors legalizing pot, supports abortion rights, and opposes the wars in Afghanistan and Iraq. Oh, and he doesn't go to church. "I don't think you'll ever hear me invoking God in anything I do," he tells me.

It is an incongruous foundation from which to seek the mantle of a party whose last president, George W. Bush, famously claimed that his favorite philosopher is Jesus Christ.

Johnson faces other obstacles, too. Aside from his low name-recognition, he has no discernible power base. After eight years on the job in Santa Fe, he was term-limited out of the governorship at the end of 2002 and stepped back from public life thereafter. Fundraising will be arduous. And his ambitions are the object of outright scorn from the Washington establishment.

"His chances are zero," political analyst Stu Rothenberg says via e-mail. "I'd say that they are less than zero, if there was such a thing. I'd expect his impact to be nonexistent."

That assessment may prove correct, but it's also worth remembering that the same things were said a few years ago about an obscure Texas congressman named Ron Paul. True, Paul didn't come close to winning the 2008 GOP nod, but he did raise tens of millions of dollars, outpoll Rudy Giuliani and have an impact on the party in ways that are still being felt.

Political observers back in Johnson' s home state don't necessarily fancy his chances of becoming the Republican standard-bearer in 2012. But they have been wary of underestimating him ever since he came from nowhere to win the governorship.

"He's got to be viewed as a long shot," says New Mexico pollster Brian Sanderoff. "On the other hand, he makes good arguments, he's an energetic guy, he' s not your typical politician and he' s got his rap down pretty well.

"If ever there was a time for someone like Gary Johnson, it's now."

A 57-year-old fitness fanatic who climbed Mt. Everest in 2003, Johnson chooses the New York Athletic Club on Central Park South as the venue for our interview. Besuited and with reading glasses dangling around his neck, he answers almost every question with a smile and, sometimes, an idiosyncratic, wide-eyed expression. The overall effect is of a courtly, mildly eccentric uncle. This, in itself, makes him seem like a misfit in today's aggressively orthodox -- and virulently partisan -- GOP.

Ask Johnson what he thinks of Barack Obama, for instance, and rather than the stream of vitriol that might issue semi-automatically from the lips of some party colleagues, he answers: "You can't help but like him."

Obama, he says, "touched" him with his rhetoric during the 2008 campaign, though he adds that the president has proven disappointing and disingenuous since then.

Johnson seems ill at ease with the belligerent icons of modern-day conservatism. What does he think of the idol of the Tea Partiers, Glenn Beck?

"I have not watched Glenn Beck. I don't watch him."

Does he listen to Rush Limbaugh?

He parries inquiries about supposed 2012 GOP front-runners like Mitt Romney, Sarah Palin and Mike Huckabee. A direct question about whether he considers Palin qualified to be president elicits a lukewarm response:

"Who is qualified? Who isn't? I really do believe that people are smart when it comes to rendering that judgment. If she's not, ultimately people won't vote for her. Conversely, if people vote for her, she'll get a chance."

At moments like these, one gets the impression that Johnson is engaged in a delicate balancing act: trying to remain true to himself and his iconoclastic impulses while also seeking to avoid gratuitously offending would-be supporters. A similar dance commences when he is asked what he thinks of the Tea Party movement.

He went to a Tea Party event in South Carolina a couple of weeks ago, he says, and was impressed when one attendee gave him a handout that claimed to identify the movement's top 10 priorities.

"Basically, one through 10, it had to do with the economy and spending and taxes. And I thought, 'This is who I am! This is what I care about!'"

Then he adds: "There was a lot of fringe there."

What does he mean by "fringe"?

"My son had a conversation with somebody who was a birther, [who] described 'birther' to my son. Well, I didn't have that conversation, but --"

Johnson stops abruptly. A full six seconds of silence ensue. Would he like to complete the thought?

On other issues, Johnson doesn't bother to hide his disdain for his party's hard-liners. Take the incendiary new immigration law passed in Arizona, for instance:

"I just don't think it's going to work," he says. "I think it' s going to lead to racial profiling. I don't how you determine one individual from another -- is it color of skin? -- as to whether one is an American citizen or the other is an illegal immigrant."

Johnson favors an expansive guest worker program and is uncomfortable with the idea of mass deportations. What about the idea of increasing security by means of a border wall?

"I have never been supportive of the wall," he replied. "A 10-foot wall [just] requires an 11-foot ladder."

Up until now, Johnson's main national claim to fame has been his effort, while he was New Mexico's governor, to legalize marijuana. The push failed, but Johnson remains committed to the cause.

"I have always seen this as a gigantic issue, when you consider what we spend on law enforcement and the prisons," he says. "The fact that we are arresting 1.8 million people a year -- and to what end? We have had virtually no effect on this in decades of pursuing current policy. I don't know why we can't accept marijuana use similar to alcohol."

All of this raises an obvious question: What is Johnson doing in the Republican Party?

He argues that the GOP is a broader coalition than is commonly portrayed. On the marijuana issue, he contends that there are "as many very conservative Republicans" in favor of legalization as there are "what you might call left-wing Democrats" opposed.

"I haven' t found the Republican Party to be exclusive as much as inclusive," he adds.

Still, he concedes that the libertarian strain of Republicanism he embodies is somewhat marginalized in today's GOP. "On the other hand," he is quick to claim, "the rising wing, the heartbeat, really, of the Republican Party right now is this rising libertarian element -- the campaign for liberty."

By this, he means the movement centered around Ron Paul. On foreign policy, Johnson' s views are straight out of Paul' s rhetorical armory. He asserts that "our security is not being threatened" in either Iraq or Afghanistan. In fact, he argues, America' s "actions have actually had a reverse impact on our security. We have made enemies out of tens of millions of individuals that maybe we wouldn' t have made otherwise."

It is the drain on the nation' s finances caused by the two wars that seems to horrify him more than anything else. His fierce fiscal conservatism represents the main -- or perhaps only -- sliver of common ground Johnson shares with the mainstream of his party.

He laments that the nation is "bankrupt" and adds that the current level of national borrowing is "catastrophic." He blames both parties for this sorry state of affairs.

Johnson' s prescription is plain: "slashing spending," especially with regard to "the Big Four: Medicare, Medicaid, Social Security and Defense."

Advocating for this surely represents a hefty political gamble -- namely, that people are so worried by the deficit that they will countenance massive cuts in programs from which they themselves benefit.

The alternative, he suggests grimly, is for the United States economy to slide to "third world" status. There is, he insists, a real danger of a "fundamental collapse."

As governor of New Mexico, Johnson vetoed some 750 bills, a total that he has said surpasses the aggregate vetoes of all the nation' s other governors during that period. He became known as "Governor No," a label he seems to wear with some pride. Ron Paul is, of course, known in some quarters as "Dr No."

Johnson' s current role is as the honorary chairman of the Our America Initiative, a political advocacy committee that appears to exist solely to propagate his views and boost his profile. But the organization' s place within the dense thicket of election law -- it is a 501(c)(4), an even less-regulated version of the better-known 527 type of group -- means that Johnson cannot discuss whether he is going to be a candidate for federal office.

"You can make any conjectures you might want," he notes.

Johnson is betting that the country is in the mood for some more tough love, albeit wrapped in flamboyantly libertarian garb. It' s a risky wager at best. But one thing is guaranteed: If Gary Johnson runs for president, he' s sure to freshen up the national conversation. And those debates with Mitt Romney should be fun to watch.