With no prospect of catching any seafood any time soon, fishermen wait for BP to hire them for cleanup work 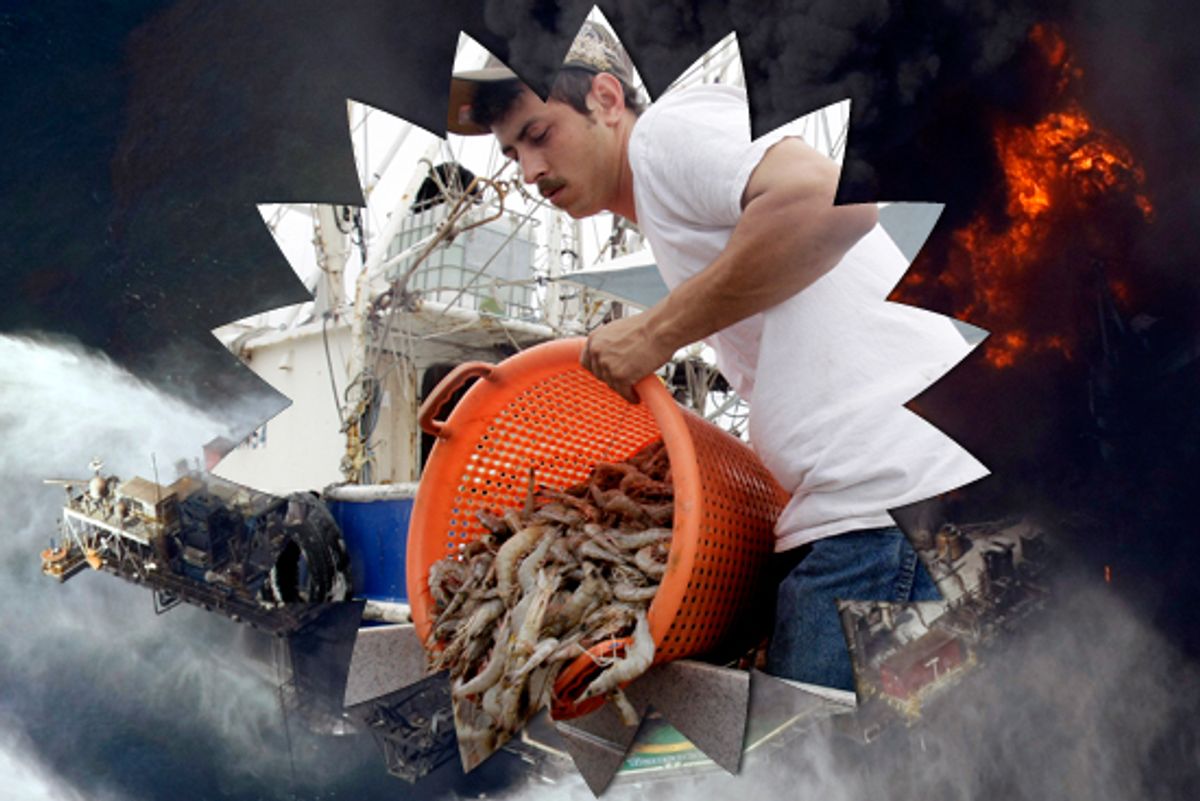 Background: The Deepwater Horizon oil rig is seen burning on April 21. Inset: Jacob Terrebone pours shrimp from the Bub-Poot-Nae's catch into a buyer's cooler, at the Venice Marina in Venice, La., on May 2.
--

Jose Wilson set out from Venice on his boat, the "Miss Lil," for one last shrimping run through the bayou Monday night. The emergency season Louisiana wildlife officials had opened, in a last-ditch attempt to bring in something from the Gulf of Mexico before the BP oil spill fouled all the water, was closing Tuesday; it was Wilson's last shot to make some money for a while. In 30 minutes of trawling, Wilson caught 40 pounds of shrimp -- enough to make $2,000 if he fished an 18-hour day, a pretty good haul.

But then a buddy of his called from back at the marina, with the latest unsettling rumor to buzz through the local fishing community since the oil first began erupting two weeks ago: If you didn't get your boat back to the docks, pronto, you might miss your chance at getting hired for the cleanup operation. And since working for BP on the cleanup is about the only job in sight any time soon, Wilson turned around and rushed back to port. Which is where he was, sitting and waiting, by late Tuesday morning -- with no word at all from BP on when, or even whether, they would hire him.

"This is ridiculous," said Wilson, 43, a third-generation shrimper from Buras, La. "They want you to stand by here and wait. Man, my old lady is 7 months pregnant. I have no room to wait. I'm flat broke ... If I can't go to work by next week, I'm out. I got a week to make money to pay my light bill."

Before the Gulf oil spill has even touched the shore or drifted into the marshes of southern Louisiana, it already threatens to wreck the fishing communities along the state's wetlands. With no prospect for catching any fish, shrimp or oysters in the near future, thousands of people who don't really have any other way to make a living are looking at an economic catastrophe. Shrimpers around here might make $80,000 or $100,000 during the five months out of the year they work, but costs of operating a boat and hiring deckhands eat up about half that. Which means President Obama's pledge that the federal government will make BP pay fishermen's lost income may be tough to keep, unless Congress overturns -- retroactively -- an existing law that limits the company's liability to $75 million.

BP claims it will put local fishermen to work containing the oil spill: Mike Abendhoff, a company spokesman airlifted in from Washington state, told me Tuesday morning they had signed up 700 local boats to join the effort. But that's not happening very fast; Abendhoff also told me only a handful of boats had left from Venice with booms. Fishermen were already grumbling about having to spend a few hundred dollars on fuel and equipment to help out with the cleanup, then wait for a call from BP. Until the weekend, the company had been making them sign contracts that a federal judge wound up declaring void, because they would have essentially forced the fishermen to waive all liability for anything that might go wrong from the spill. (Abendhoff brushed that off as unintentional.)

Meanwhile, wildlife officials aren't saying when they might loosen restrictions on catching Gulf seafood, but with an oil slick the size of Delaware already out on the water -- and thousands of gallons a day gushing out of the sea floor -- it's hard to imagine things being back to normal any time soon. Which has some people here saying the oil spill could wind up being worse than Katrina, which practically wiped southern Plaquemines Parish off the map; at least with the hurricane, there was something to catch once you had returned from evacuating and got your boat back in shape (or replaced).

"A year from now, when everybody else is gone and all the workers are gone, what are the people here going to do?" asked Brian Sherman, of Buras. Sherman works for Cajun Unlimited, a sport-fishing outfit on Route 23 just up the river from the Venice port, that's rapidly trying to convert itself into a catering business for out-of-town oil cleanup workers now that most of their summer clients have called to cancel. He only arrived in southern Louisiana about five years ago -- eight days after Katrina, when he came down from Michigan with a church group to do relief work and wound up moving here. This summer, Sherman says, construction was supposed to begin on some houses for people near Venice who still hadn't moved back in after the hurricane. Now that might not happen. "Look, you're not gonna go build another 70 homes in the area if they don’t have any livelihood to be able to pay their mortgage," he said. "What good does it do?"

Because no one yet knows how much oil will spill out into the Gulf, or what it will do when it starts washing into the coastal marshes and beaches in the area, the disaster is unfolding in a strange slow-motion here. The air, on Tuesday, didn't smell of oil or gas at all, though people much further inland were complaining of fumes over the weekend. Stormy weather finally passed, and the sun was shining brightly. The only real signs that anything was amiss were the large numbers of fishermen hanging around on their docked boats and a media horde that had descended on the port. You could hardly go 200 feet without seeing another TV cameraman filming the Mississippi River or the Gulf; Fox News Channel had set up a base downstairs from the marina's restaurant, and satellite trucks from other networks and local stations were all over.

Which meant some of the shrimpers were trying, without much success, not to think about what it would all mean. Since none of them had actually encountered the oil yet -- because BP wouldn't hire them and send them out to clean it up -- they could still hold out some optimism that it might not be as bad as the dire projections. "If it hits both sides [of the Mississippi Delta], then we got a problem," said Henry Hess, 51, born and raised in Venice. He owns the Miss Jodie II, a shrimp boat he built, mostly from scratch, for about $30,000 (and a bunch of Budweiser for his friends who helped him out), saving more than half the cost of buying one. "Right now, we just got half a problem. Me, I'm praying to God that that bitch stay on the other side of the southwest pass."

If it doesn't, Hess doesn't have much hope for other work. He can't really read or write, and when he tried working in the oil business a while back, he chafed at taking orders from the corporate hierarchy. Even after Katrina, when he fled to Baton Rouge for a while, waiting for the Coast Guard to certify his boat was safe to use again, he was too antsy to get back on the water to find another job. "This is all we did all our life -- we don't know nothing else," he said. "I guess it just ain't hit me yet." Unfortunately, soon enough, it will.