The first recipe in the series honors the Associated Press, decked with eggs, bacon, and corned beef hash 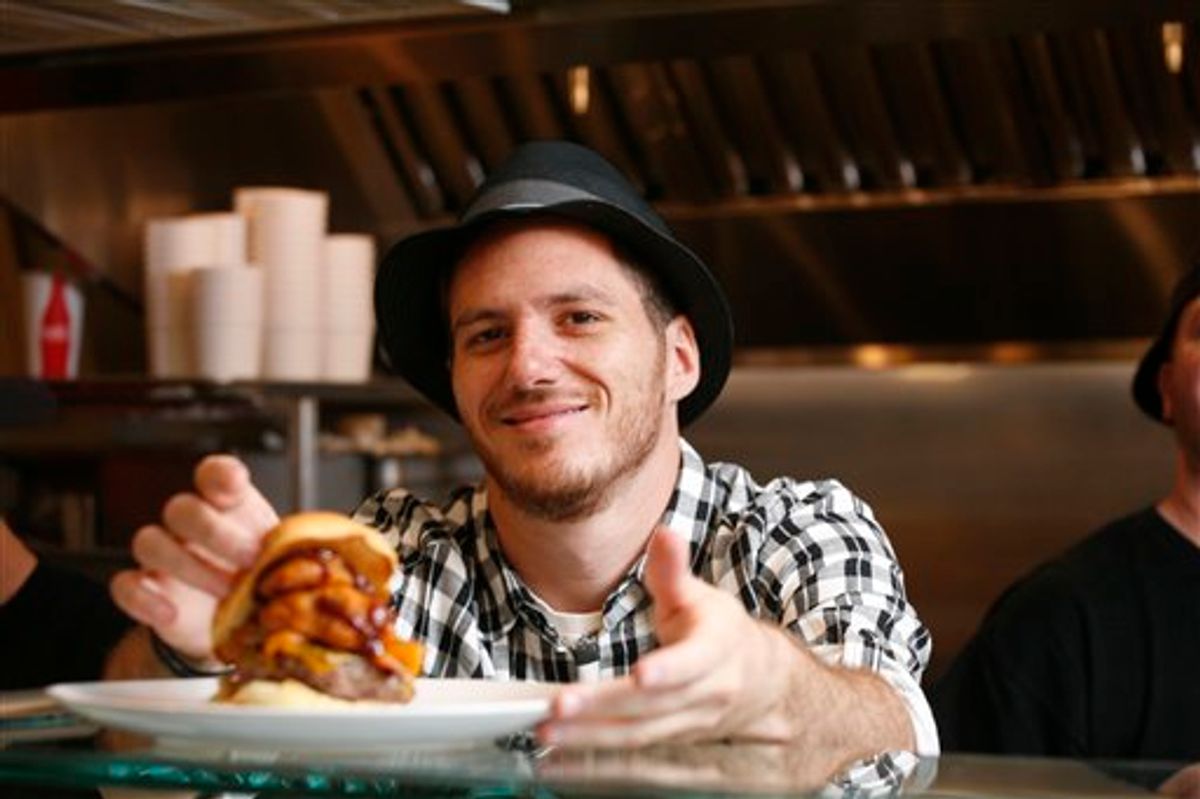 A burger so over-the-top it's just a hair shy of overwhelming. Kind of like the news media these days?

Either way, it's the sort of burger Spike Mendelsohn says is needed to fuel the people behind the world's largest news organization, and what he set out to create when asked to develop a hamburger inspired by The Associated Press.

Because, er. nothing says great burger like wall-to-wall coverage of war, politics and upset celebrities, right?

Despite the (lack of?) inspiration he was handed, true to his burger master cred -- his Washington burger joint, Good Stuff Eatery, has become a hotspot for the likes of first lady Michelle Obama -- Mendelsohn came up with a winner.

"For the people that never stop," Mendelsohn said of his 24/7 burger, the first in AP's weekly series -- 20 Burgers of Summer, a celebration of the delicious diversity of the great American hamburger.

"Whether you're embedded with troops in Iraq, photographing the animals of Africa or live from the White House, here's the burger that will keep you going any time of day," said Mendelsohn, whose ode to burgers, "The Good Stuff Cookbook," is out later this month.

But this burger is easy to love even if you don't live life reporting on deadline. Mendelsohn starts with a pan-fried patty of ground sirloin, which he tops with bacon, a fried egg and a slice of American cheese.

That gets placed on a toasted brioche bun and topped with freshly made corned beef hash. He finishes it with his go-to burger condiment -- Good Stuff Sauce. It starts as a homemade mayonnaise that is spiked with ketchup, molasses and vinegar.

For the Good Stuff Sauce:

For the corned beef hash:

To prepare the sauce, in a food processor or blender, combine the eggs, mustard, vinegar and 1 teaspoon of the salt. Process for 30 seconds in a processor, or 10 seconds in a blender.

With the motor running, drizzle in the oil, slowly at first, then add in a thin, steady stream until all of the oil is added and the mixture is smooth. If the sauce is too thick, thin it with a little hot water. If too thin, process a little longer.

Add the ketchup, molasses, vinegar and remaining teaspoon of salt. Process until smooth. The sauce can be refrigerated in an airtight container for up to 1 week.

To prepare the corned beef hash, in a large (preferably cast-iron) skillet over medium, melt the butter. Add the onion and saute until translucent. Mix in the beef and potatoes, then spread the ingredients in an even layer over the pan.

Increase the heat to high or medium-high and press down on the mixture with a metal spatula. Do not stir the potatoes and corned beef, but let them brown. If you hear them sizzling, this is good.

When nicely browned on the bottom, use the spatula to flip sections over in the pan so that they brown on the other side. Press down again with the spatula. If there is too much sticking, you can add a bit more butter to the pan.

Remove the pan from heat and stir in the chopped parsley. Season with salt and pepper. Set aside.

To prepare the burgers, roll the meat into six 5-ounce balls, then flatten into patties. Place on a plate, cover and refrigerate.

Line a plate with paper towels.

In a large nonstick skillet over medium, heat the oil. One at a time, crack the eggs into the skillet, cover and fry for 2 minutes. Use a slotted spoon to transfer the eggs to the paper towel-lined plate to drain. Discard the oil.

Return the clean skillet to medium-high heat. Add just enough canola oil to coat the bottom. Add the bacon and cook until crisp, about 6 to 8 minutes. Use a slotted spoon to transfer the bacon to the paper towel-lined plate to drain.

Working in batches, add the patties to the skillet. Season with salt and pepper and cook for 3 minutes. Flip and cook on the other side for 1 minute. Place an equal amount of the bacon, 1 fried egg and 1 slice of cheese on each patty.

Cook for another 2 minutes for medium-rare. Cover with a lid for the last 30 seconds to melt the cheese.

To assemble the burgers, place 1 patty on 1 toasted bun bottom. Top the patty with corned beef hash. Dress with a generous amount of the sauce. Cover with the bun top. Wrap in waxed paper, then let rest 2 to 3 minutes before serving.

EDITOR'S NOTE: J.M. Hirsch can be e-mailed at jhirsch(at)ap.org.