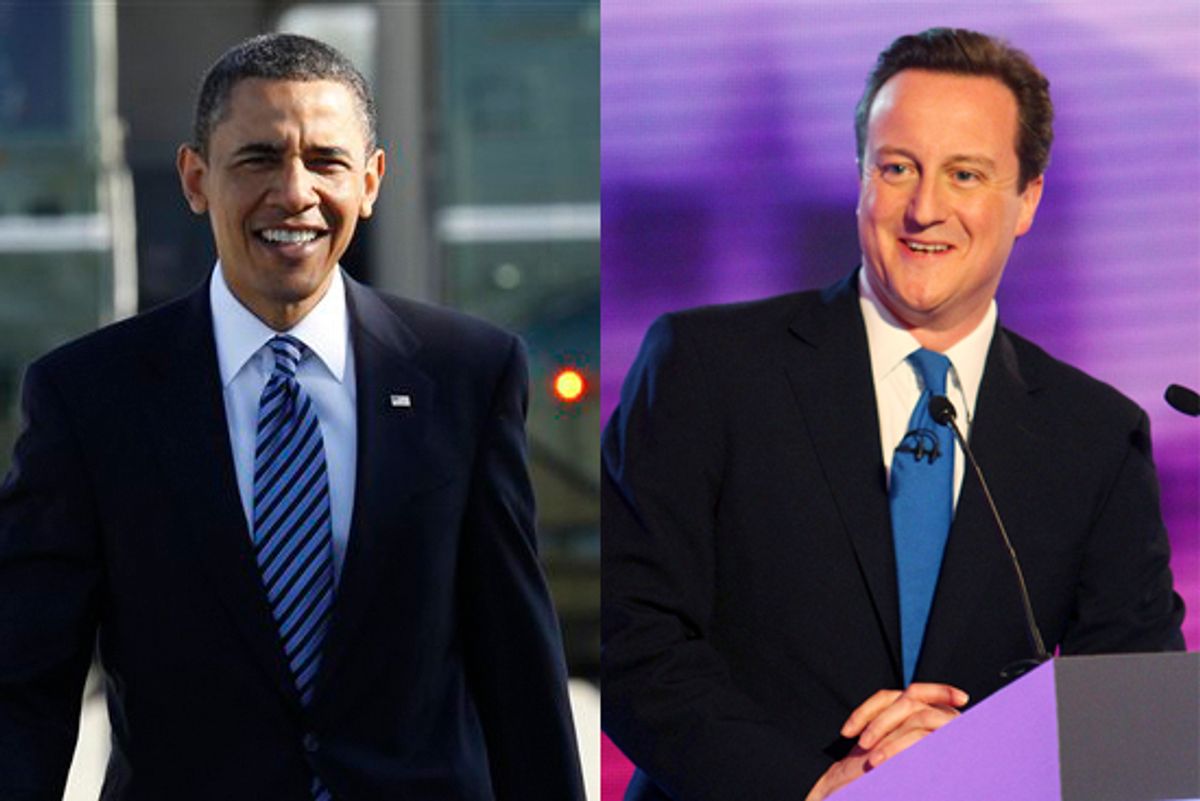 President Barack Obama walks towards Air Force One at Andrews Air Force Base, Md., as he travels to Ann Arbor, Mich., to deliver the commencement address at the University of Michigan Saturday, May 1, 2010. (AP Photo/Charles Dharapak) (Charles Dharapak)
--

Republicans here are increasingly excited about the British elections Thursday, in which the Conservative Party looks like it will do far better than the governing Labour Party or the newly trendy third party, the Liberal Democrats. So let's see. Resounding loss in parliamentary elections for the left-wing party in power in an English-speaking nation: That sounds like good news for Republicans before our own November midterms, no?

Well, maybe not. It's worth keeping in mind, as the polls begin to close, that the Tories are well to the left of U.S. Republicans. So far to the left, in fact, that former White House communications director/Obama campaign strategist Anita Dunn worked for the Conservatives during the short British election season, helping leader David Cameron prepare for the nation's first U.S.-style televised debates. (Other Obama advisors, like pollster Joel Benenson and strategists David Axelrod and David Plouffe, reportedly worked with Labour's Gordon Brown -- who apparently needed some help.) Under Cameron's leadership, the Tories have refused to rule out the possibility of raising taxes; appointed two gay men to top posts in an explicit effort to appeal to socially liberal voters; defended Britain's National Health System -- the target of so much "death panel" rhetoric here last year -- and declared the fight against man-made climate change was one of their top priorities. Cameron even said, during the third and final leaders' debate, that the Conservatives thought Obama's bank reform policy was the right course to pursue.

"When the Republican Party of the United States has, as its first campaign pledge, that they will increase spending for healthcare, then I will think about working for them," Dunn told Salon Thursday, as she waited for British election results to trickle in. "The only lesson you could draw for the United States [from a Conservative victory], that the Republicans should draw, is that in order to go from a party of criticism to a party that is considered in any way ready to govern, you have to move past your negativity and move towards the center -- which they show no signs of doing."

For about 30 years, though, Republicans have felt a great kinship with British Conservatives -- which mostly dates back to the 1980s, when Margaret Thatcher and Ronald Reagan both came into office promising to slash government spending (except on defense) and bashing liberal Democrats or socialist Labour politicians. But that paradigm may not make as much sense as it used to. On some broad issues, yes, the Conservatives match up with the GOP; both parties want to cut government spending and immigration, for instance, and both are wary of internationalist institutions like the European Union. (The Greek budget trauma and the European financial crisis may have had as much to do with the Conservative surge in recent weeks as anything else.)

But Tony Blair, who -- inspired by Bill Clinton's triangulation -- moved Labour to the center in the 1990s, was one of George W. Bush's most stalwart international allies. And the Obama administration doesn't appear to be anywhere near as close to Brown as, say, Reagan was to Thatcher. (Obama's gift of a DVD collection didn't go over well in England.) Plus, Labour has been in power for 13 years now -- compared to Democrats, who have only been in charge of Congress for four years and the White House for two. It's always dicey to draw lessons from elections in another country, and Thursday's vote could be another illustration of why.

"People in this country still think it's Margaret Thatcher vs. Tony Blair," Dunn said. "All of the parties have moved significantly. It's a different era."