"My dad did the same thing"

In an excerpt from his new book, novelist Nick McDonell asks servicemen about what brought them to the conflict 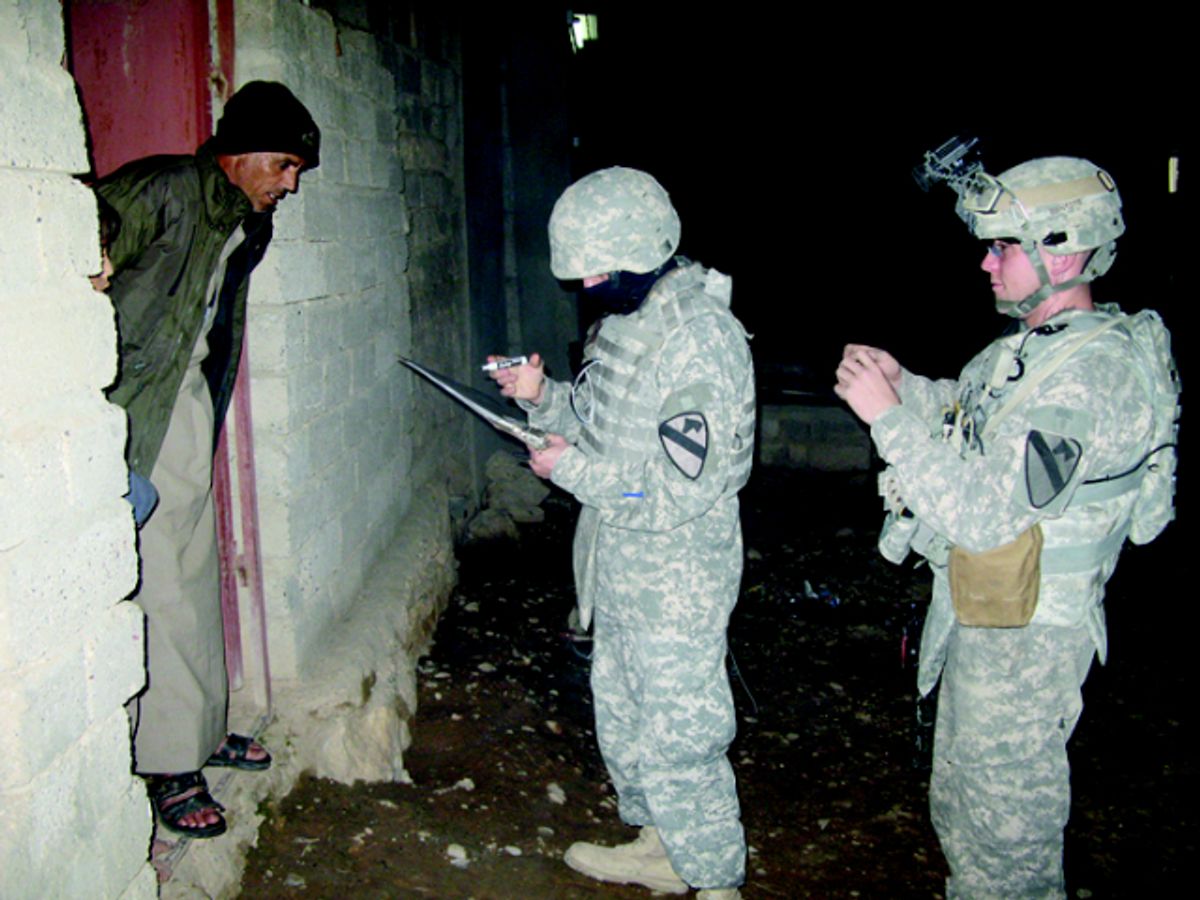 In late winter of 2009, novelist and Time correspondent Nick McDonell was embedded in Iraq with the 3rd Brigade of the United States Army's 1st Cavalry Division. This spring, McSweeney's is publishing McDonell's engrossing, sharp-eyed reports from the front lines in "The End of Major Combat Operations." The following excerpt centers on Nick's interviews with several soldiers about what brought them to Iraq. For reference, "terp" is short for interpreter.

Everyone you met could explain why he was there.

"It is a sign of faith that we're here now," specialist Ryan Dunne told me as he stood watch over a line of detainees facing a wall in an abandoned school. "It's faith that they can do the job."

Usually the reason was simpler. Because I'm a soldier and I follow orders. Sometimes it was more complicated, especially for Iraqis. And they were the ones who really needed an answer, because the Americans were always asking them what they were doing here. As they walked to school, to the market, hand in hand to the mosque, on their way to weddings and funerals. The wrong answer got you facing a wall under the watchful eye of Specialist Dunne.

Most problematic for the Americans were the Iraqis who explained nothing, who simply detonated. This was of course the clearest explanation, clearer even than "I am an Iraqi, what are you doing here?"

And the real American answer was this: "I want to be here." Even if a few were surprised at the deployment, or were escaping some trouble back home, or were against the war. Everyone, one way or another, had signed up, even if they hadn't been thinking about what that meant. But then, the future was hard to know.

I asked Specialist Dunne about the future one day, as we watched another guy in his squad scan the eyes of a detainee across the hall. "What about after the U.S. leaves?" I said. "Do you think it'll be okay?"

He scratched one of the pimples on his cheek, under his tired, twenty-two-year-old eyes, and laughed. "They'll get invaded."

2nd Lieutenant Max Palumbo was short, stocky, twenty-two, and spoke in a nasal South Boston accent. He did not like reporters, and his captain told me that he had embedded me with Palumbo because he thought it would be good for him to get some practice talking to the press. Told me something like, "He's gotta learn how to talk if he wants to get anywhere in the Army."

But Palumbo was already famous for the way he talked. He called everybody cocksucker, and he said it so broadly it sounded more like caulk soccer. The way Palumbo talked was a running joke for the other guys in his company. Loud and rude and Bahstan, funny every time somebody did an impression, especially if you thought about Palumbo's delicate, almost inaudibly quiet terp, Andy.

Andy was a Yazidi guy -- the Yazidis being the Kurdish ethnic group that I had been told worshipped the devil. All the terps had Iraqi names, of course, like Yassem, or Uday, or Malik, but they all got renamed Ricky, or Cosmo, or Blue, or Andy. Andy really didn't look like an Andy, but he had more reasons than most for using an alias. Palumbo told me that some of the guys had come around a corner once and "caught the little fecker getting railed by one of the other terps." And as a Yazidi, Andy was a member of an even smaller minority than gay Iraqi terps.

"Worst terp in the feckin' Army, and you can't heah the little queah when he talks. Feck," Palumbo told me, shaking his head. The night-vision attachment to his helmet swung back and forth like a cobra head. "I hate the feckin' guy."

Palumbo seemed to hate everything. He was not even twenty-five, but he had a lot to live up to. His division antecedents had fought through Rhineland, Ardennes-Alsace, and Central Europe in World War II, and the Drang Valley in Vietnam. There in Mosul the two other lieutenants in his company had already taken contact and fired back, but Palumbo had not seen a single moment of action. He told me directly he really wanted to "take some feckin' contact."

Everyone I asked agreed that this was normal. The metaphor that often came up by way of explanation was that it was like training all season for the game and never getting to play. I thought about this as I watched Palumbo tell Andy to speak the feck up as he translated for some Iraqi police in the rubble of their car-bombed checkpoint.

"You tell them that they need anything, they call me," said Palumbo, pointing at his cell phone. "They get that?" he said to Andy. "Those cocksuckahs come back, they call me."

"Cocksuckah," said one of the Iraqi police, giving a thumbs-up, and they all laughed, even quiet Andy.

Everyone seemed to be a father. The usual demographic factors were in play. Soldiers tended to be from rural or inner-city, lower-income backgrounds. But there was so much fatherhood you got the sense that there had to be more to it than that. One explanation I got was that the twelve months between deployments was exactly the right amount of time to get a family started.

Profits from this book will be donated to the List Project, a nonprofit organization founded in the belief that the United States has a clear and urgent moral obligation to resettle to safety Iraqis who are imperiled due to their affiliation with the U.S. It has two pillars. One: help the hundreds of Iraqis on the organization's constantly expanding List make it to the United States through a partnership with three top law firms and more than 150 attorneys. And two: provide a "cushion" for resettled Iraqis upon their arrival to America by building an integration-support fund to help defray emergency expenses, and by helping them find meaningful employment.