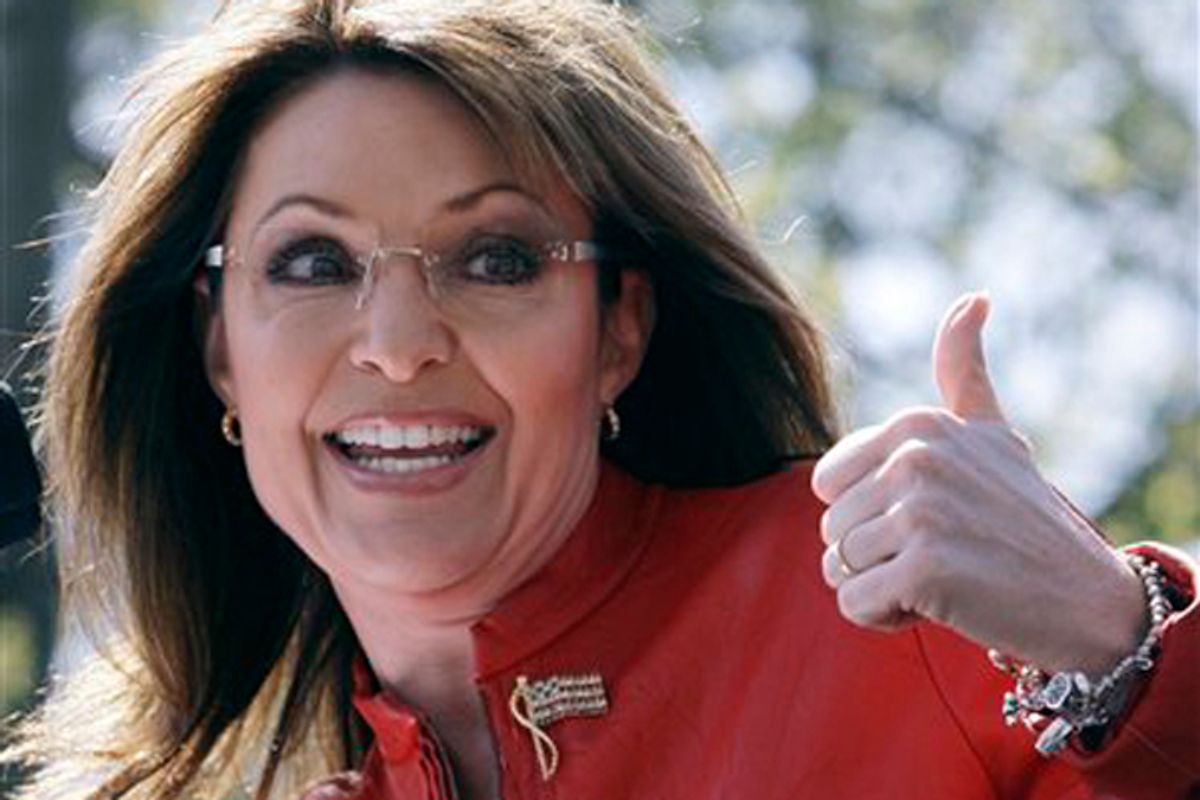 FILE - In this April 14, 2010 file photo, Sarah Palin flashes a thumbs up towards her husband Todd as she begins to address a crowd during a stop of the Tea Party Express on Boston Common in Boston. Sarah Palin could have hardly picked a more liberal town than Eugene to give a speech. The university town has been a hotbed of radical activity over the years, from the Vietnam War to environmental activism. But Palin is the headliner at a Republican Party fundraiser Friday night. (AP Photo/Charles Krupa, File) (Charles Krupa)
--

Once-upon-a-time Alaska Gov. Sarah Palin has endorsed Carly Fiorina for senator from California. But! The "Tea Party" candidate was supposed to be some other guy! Is Queen Sarah going to upset the movement? Or does she just not care, because she's already rich?

The radical activist teabagging fringe movement that will propel Republicans to victory in November is actually not very good, or consistent, when it comes to picking candidates. Conservative Bob Bennett is screwed, but moderate Scott Brown was a Tea Party hero (until he voted with Democrats on some procedural matter related to a toothless jobs bill). Charlie Crist hugged Obama, so he is out. Trey Grayson seems like a regular conservative Republican, but the Tea Partiers do not like him, because he is running against a libertarian-leaning Republican (except on the fun stuff like drugs): Rand Paul, of the Internet Pauls.

Out in California, the "Official" Tea Party candidate is rabid conservative Chuck DeVore. (Former congressman Tom Campbell is also running, and he is winning another big chunk of the conservative vote.) But Carly Fiorina, a wealthy, failed businesswoman who is the "establishment" candidate, hits basically all the same notes of "no spending on anything except the stuff you like and no taxes for anyone but also we will fix the deficit" as every other Republican, so why wouldn't the Tea Partiers like her just as much?

Marc Ambinder has his theory as to why Sarah Palin endorsed Carly Fiorina (she just picked who she thinks is the likely winner). But I have my own: She finally watched this ad.